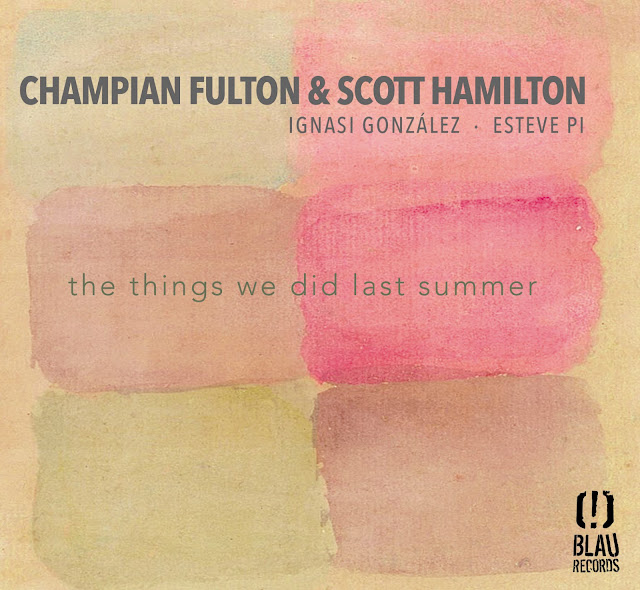 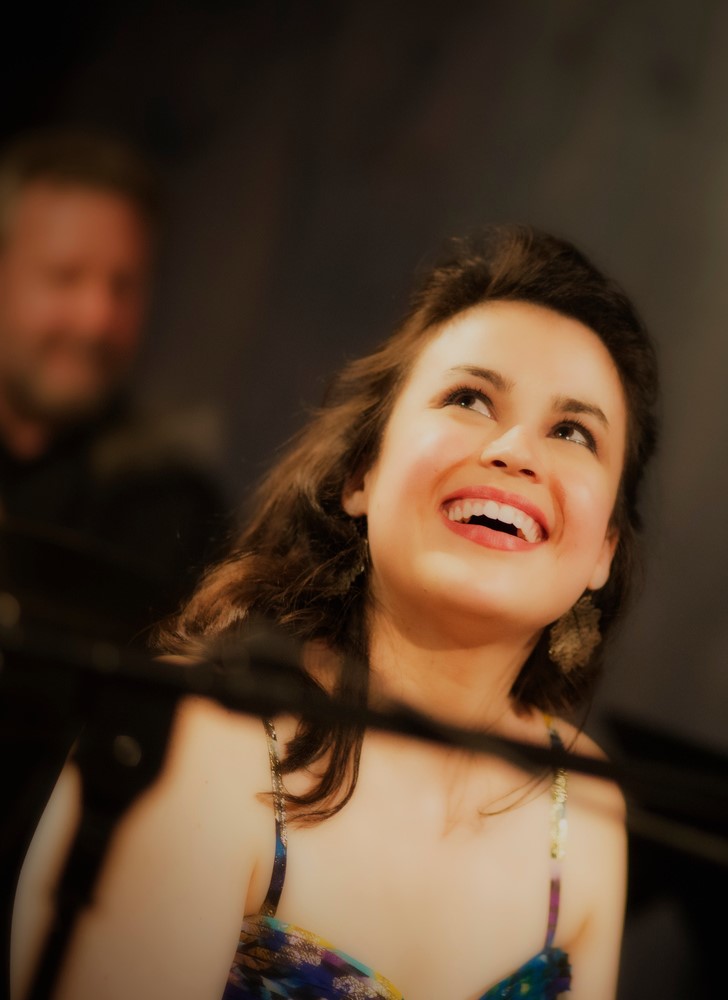 Scott Hamiton joins forces on stage with pianist/ vocalist Champian Fulton on an energetic, warm and empathic gig recorded live at Benicassim, Spain. This is the first time these two musicians record together and both styles prove to be a perfect match. Hamilton’s warm and big tone and Fulton’s expressive voice and chops at the piano make the music uplift any jazz fan's day. They are the kind of performers who engage their listeners and draw them into a swinging world with their interpretations. With the outstanding back up of Ignasi Gonzalez on bass and Esteve Pi on drums. Highly recommended! 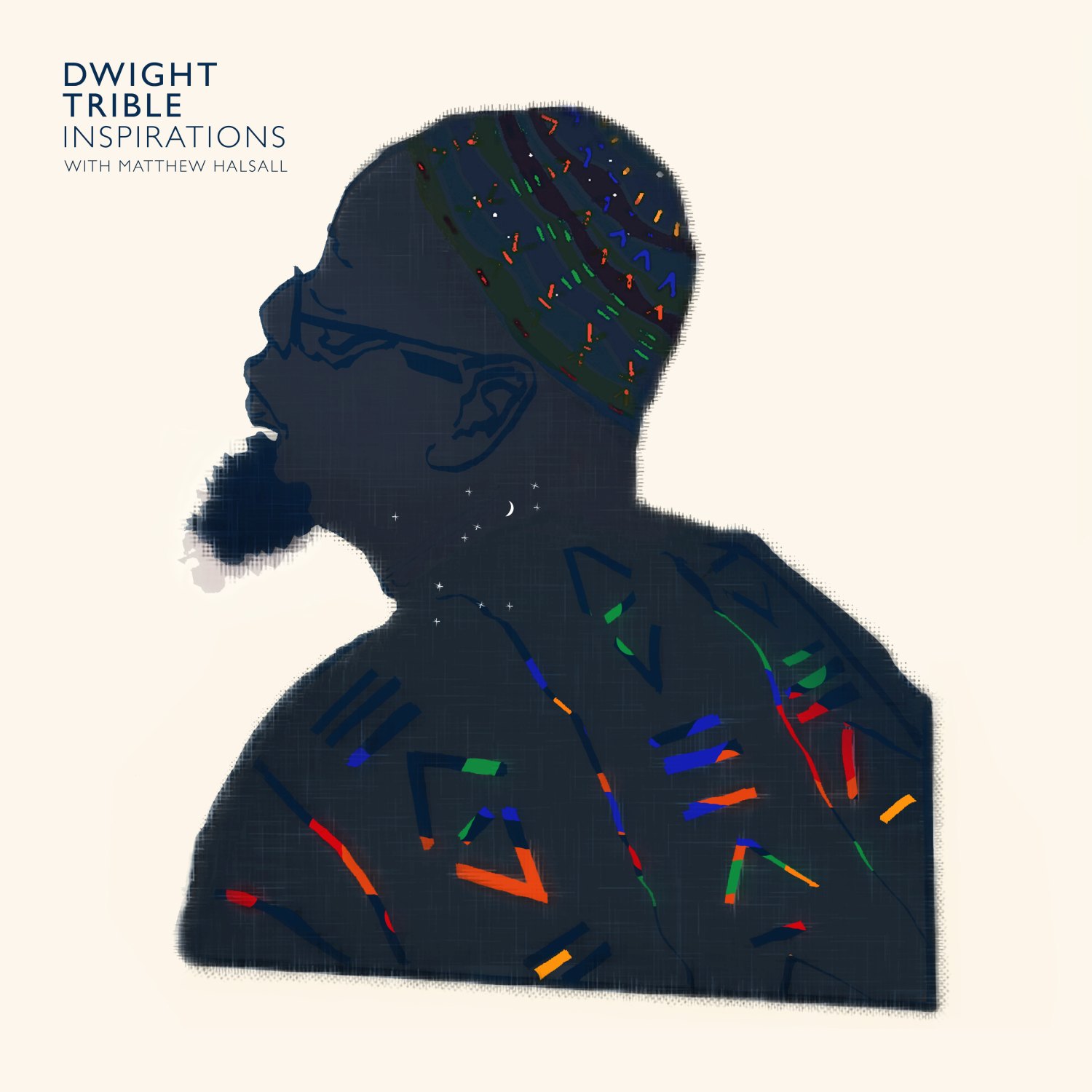 Manchester based trumpeter, composer, arranger and producer Matthew Halsall has carved out a unique niche for himself as both a band-leader and producer delving deeply into the worlds of spiritual jazz and string-laden soul. His latest project finds him playing with and producing the legendary LA jazz singer Dwight Trible, who first came to international renown with his 2005 Ninja Tune release Love Is the Answer. Trible, whose deeply soulful voice has seen him compared to Leon Thomas and Andy Bey, has worked with the likes of Pharoah Sanders, Horace Tapscott and Kamasi Washiongton (he sings lead vocals on the Epic) and brings a deep-rooted soulfulness to everything that he sings. Halsall and Trible first met at the Joy of Jazz Festival in South Africa back in 2015, when a chance encounter backstage led to Trible sitting in with The Gondwana Orchestra for an impromptu reading of the classic Pharoah Sanders and Leon Thomas anthem 'The Creator Has A Master Plan', and a lasting friendship and respect for each others music was born. 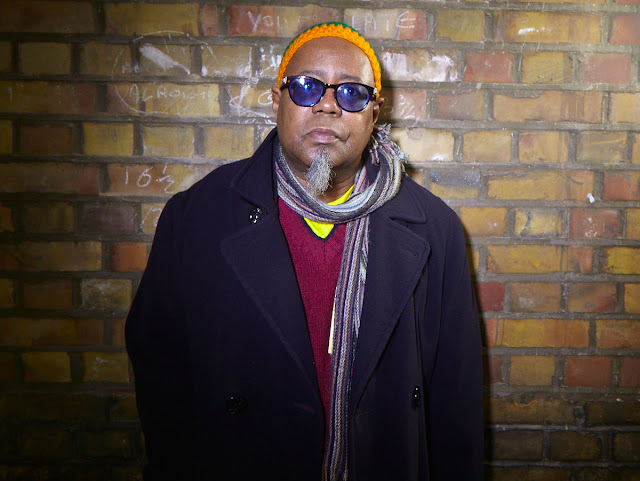 The relationship started to bear fruit in July 16, Trible was performing at the North Sea Jazz Festival and Halsall invited him to guest with him at a memorable show at the, newly re-opened, Jazz Café in London. A recording session at 80 Hertz studios in Manchester followed, providing two tracks that feature here: The timeless standard I Love Paris, and the traditional spiritual Deep River, featuring Halsall regulars pianist Taz Modi, bassist Gavin Barras and drummer Luke Flowers. Inspired by what he heard Halsall offered to produce a Dwight Trible album for his Gondwana Records imprint. Together they selected some of their favourite songs and in November last year they went into Fish Factory Studios, London with new recruit Jon Scott taking the drum chair. They recorded an impassioned reading of Donny Hathaway and Leroy Hutson's classic Tryin' Times (a song as sadly relevant today as it was in 1970), a vibrant, soulful version of the Nina Simone smash Feeling Good and a beautiful take on the timeless Bacharach classic What The World Needs Now Is Love featuring harpist Rachael Gladwin. They also laid down two spiritual jazz masterpieces, a powerful re-working of Dorothy Ashby's Heaven and Hell (from the legendary The Rubiyat of Dorothy Ashby album) and a heartfelt version of Coltrane's beautiful ballad Dear Lord, with lyrics by Trible. Lyrics that have an extra poignancy after they received praise from none other than Alice Coltrane, who heard Trible perform his version of the song shortly before her passing. Rounding out the recording is a spine-tingling reading of the old folk song Black Is The Colour Of My True Love's Hair. Simply entitled, Inspirations, the album carries a clear message and the settings are classic Halsall, drawing on the vintage sounds and recording techniques of jazz's golden era but with a modern touch and he brings the very best out of Trible, leaving plenty of space for his deep soulfulness to flourish.

Mixed by George Atkins at 80 Hertz.

Mastered by Peter Beckmann at TechnologyWorks. 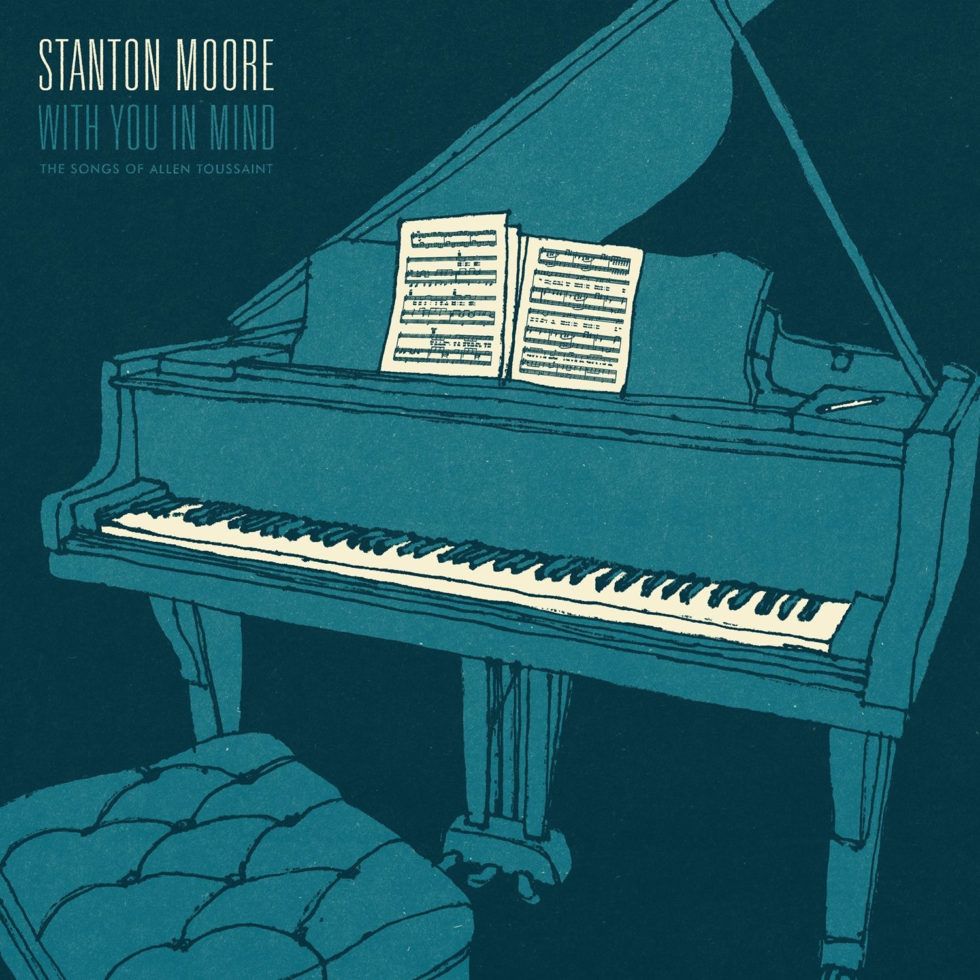 Stanton Moore New Album: With You In Mind:
The Songs of Allen Toussaint

“In the beginning was the beat. And the beat was strong . . .”
Allen Toussaint

Besides his solo projects, studio and TV work, and teaching,  Stanton Moore  the drummer of Galactic, the funky New Orleans conglomeration now in its third decade of touring, and he still finds time to record and travel as a trio with David “Tork” Torkanowsky (keys) and James Singleton (bass).Besides his solo projects, studio and TV work, and teaching, he’s    Like Moore, Tork and Singleton are in high demand, so it takes some lead time to clear everybody’s schedule. The trio had a new record ready, they thought. But then, “a couple of days before we were supposed to start recording,” says Moore, “Allen Toussaint passed.”

Toussaint’s sudden death on November 10, 2015 (in Madrid, far from home, of a heart attack, after playing a concert) shocked the city. The polymath New Orleans producer, songwriter, arranger, bandleader, pianist, singer, and all-around figure of elegance had been a vital, active presence in New Orleans since the 1950s.

The three musicians immediately shelved their planned album and went into creative hyperdrive. “We already had studio time booked, we couldn’t wait,” Moore recalls. “It’s not like we wrote out all these arrangements ahead of time. We were flying by the seat of our pants.”

As they began working up pieces of Toussaint’s vast repertoire, it quickly became a vocal album with guest singers. “As Tork likes to say,” Moore comments, “being a musician in New Orleans is like having the greatest musical toolbox at your disposal.” Supplementing their trio with some of New Orleans’s living legends – their friends — they re-imagined Toussaint’s songs, conceptualizing and building out an album on the fly. 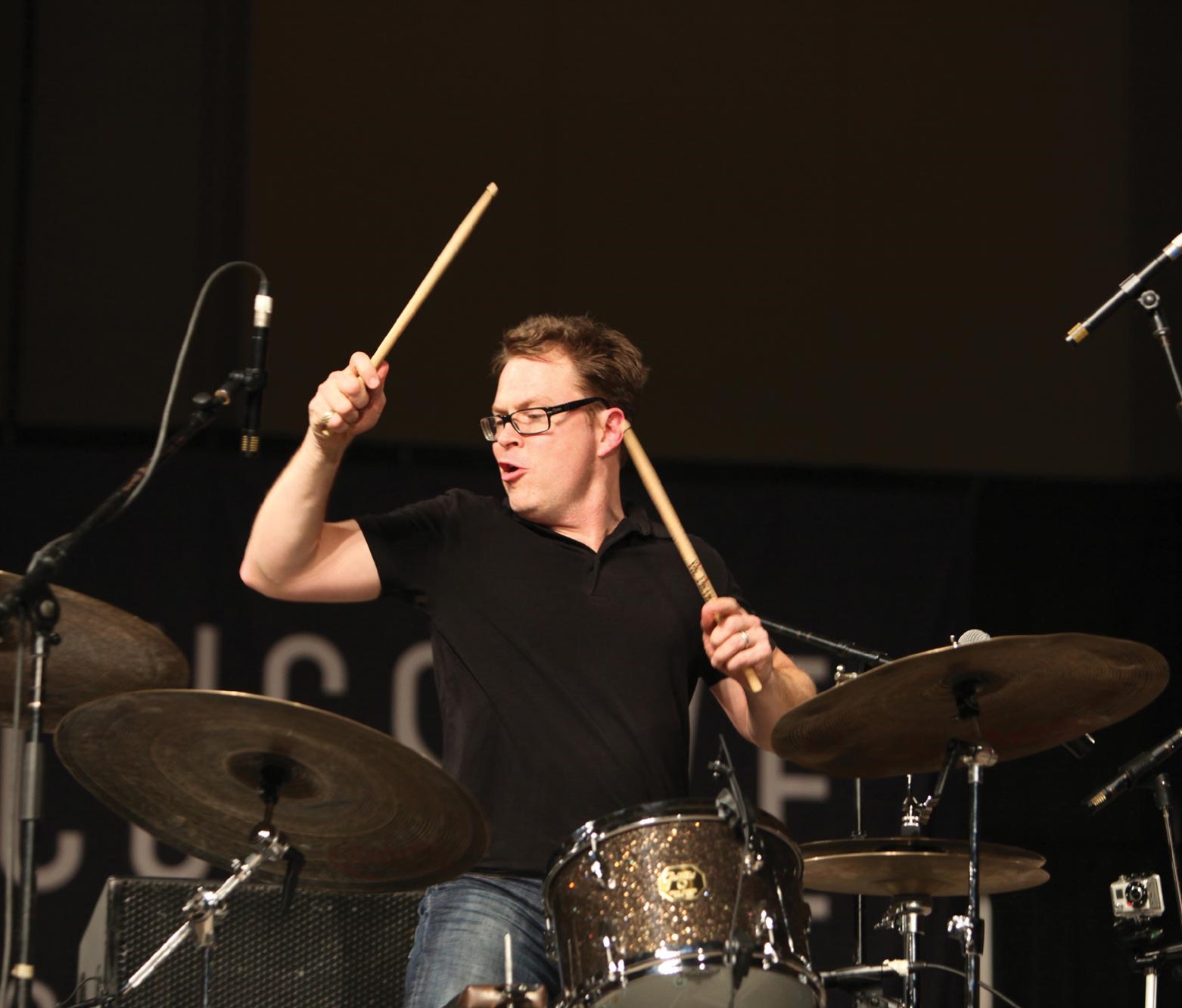 The idea of guest on particular tracks was the obvious musical path to travel after Torkanowsky invited the first guest vocalist, Jolynda Kiki Chapman, best known in New Orleans for singing with her mother, Topsy Chapman.  The collaboration with a variety of artists created an album that captures teh spirit of New Orleans and the magic of Toussaint’s work.

With You in Mind: The Songs of Allen Toussaint is built on the livest grooves the trio could deliver. It was a bittersweet project for all concerned, celebrating the memory of someone whose living presence was so important. “I didn’t get to work with Allen as often as I’d have liked to,” Moore says, “but I did get to.” Their friendship went back twenty years. “Through the years we crossed paths a few times. The first time he played with us was also the first time we played the Saenger Theater,” referring to the 2,600-seat New Orleans landmark.

“Allen Toussaint wrote the soundtrack to New Orleans,” says Moore. He came out of an environment that no longer exists.

The level of talent and ability and artistry that he embodied – we won’t see this again.” 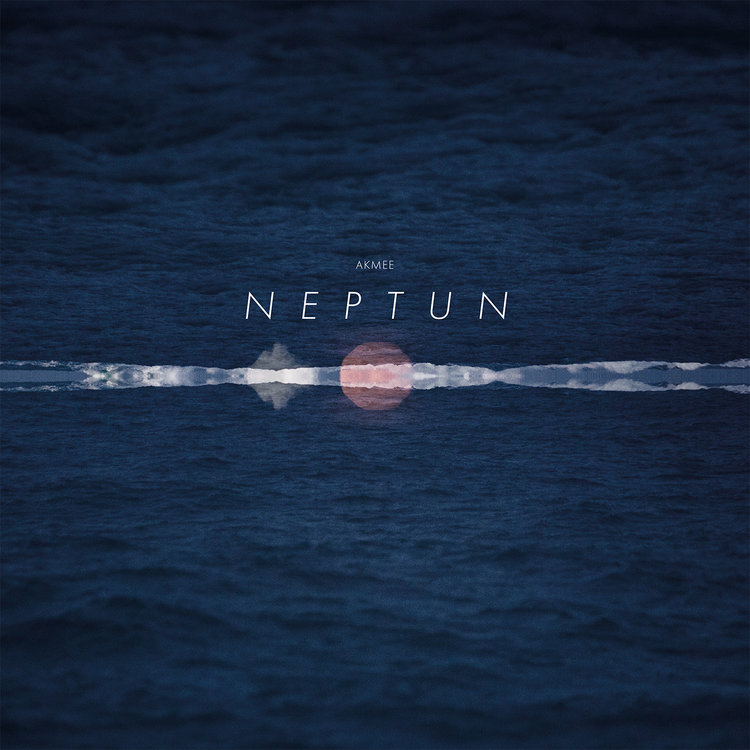 Neptune. A planet invisible to the naked eye, it was originally discovered through mathematical deduction after scientists noticed unexpected changes in the course of Uranus. It was named after the Roman god of the sea. In addition to being ruler of the liquid element, he was said to have tremendous power over our subconsciousness and emotions, which we ourselves still today have little understanding of. The title represents the unknown, ranging from the depths of the human mind and the oceans out to the vastness and mysteries of space.

The music itself is a rubbery mass of composed and improvised ideas stirred and distilled into a concrete pellet with a unique flavor: It is dark like the deep sea, astral as the sky and uncategorizable as our very own subconscious – and it grooves in a minimalistic, awkwardly satisfactory Akmee-kind of way. The album is partly inspired by Jens Bjørneboe’s novel Haiene (The Sharks) and the music of John Coltrane's later period.

1. Summoning
2. Dance of the Maniae
3. Wavelengths
4. Tides in Space 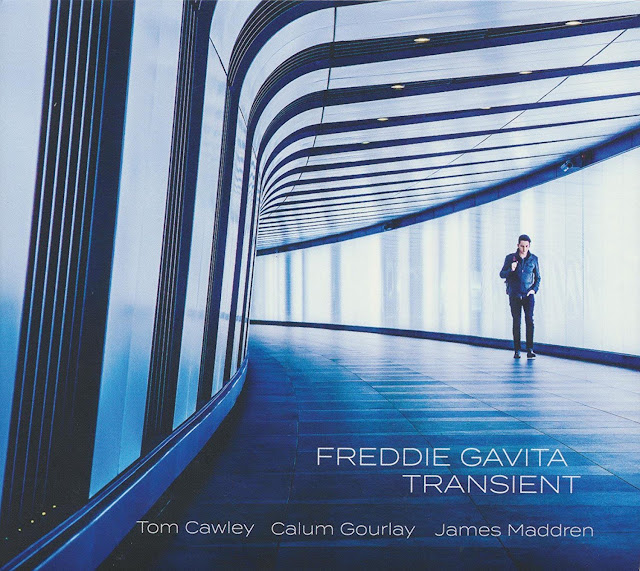 British trumpet star Freddie Gavita is now a respectable married man in his thirties, and since this is his debut album, you might think the ‘transient’ quality of the title was about how the man himself feels as he enters his early maturity. In fact, as he explains in his LondonJazz News podcast interview (link below) it’s more to do with the way jazz dips into the moment, and tunes played one way on Monday might sound very different on Tuesday.

His career to date could hardly look more auspicious: he’s a member of and writer for Ronnie Scott's late-show fixture Fletch’s Brew, as well as a member of the Scott’s house band (currently led by James Pearson) and the Ronnie Scott’s Jazz Orchestra. This well-overdue album features his own quartet, which has been together for ten years – more than enough time to record an album and get it released. Gavita raised the cash (£5,429) from crowdfunding website Kickstarter – an increasingly popular method of getting music into the wider world. It’s just a shame no individual pledged £1,000, for which you could have got the whole band to come round and play a bespoke gig in your house.

Gavita is known as an exponent of the groove in jazz and an open, fluid Freddie Hubbard tone, both of these qualities exemplified by the album’s sandwich-oriented opener Strimming the Ham, a pleasantly lumbering waltz whose rhythmic figure is laid down by Tom Cawley on piano. Turneround, the tune that follows, is another groover, this one dedicated to Gavita’s trumpeter friend, the late Richard Turner. There’s warmth and variety here too, as on the ballad Beloved, originally written for trombonist Callum Au, or the coolly swinging Pull Your Socks.

Playing with this band Gavita describes as comfortable yet risky – like ‘being wrapped up in a nice warm sleeping bag and then being chucked off a cliff’. This inherent danger does not extend to the listener, thankfully. Instead we can indulge ourselves in some fine, relaxed playing and extended playing times: most tracks are around the six-minute mark, and one or two considerably longer.

Gavita doesn’t find it necessary to grandstand, either by brandishing his chops or by sidelining his fellow band-members, all of whom have ample space to solo: Lion-O, for example, is a showcase for James Maddren, beginning with his tinkling cymbal work, and pausing throughout for a number of mini drum solos. And on Iverson Oddity, Calum Gourlay is given a chance to stretch out on bass. 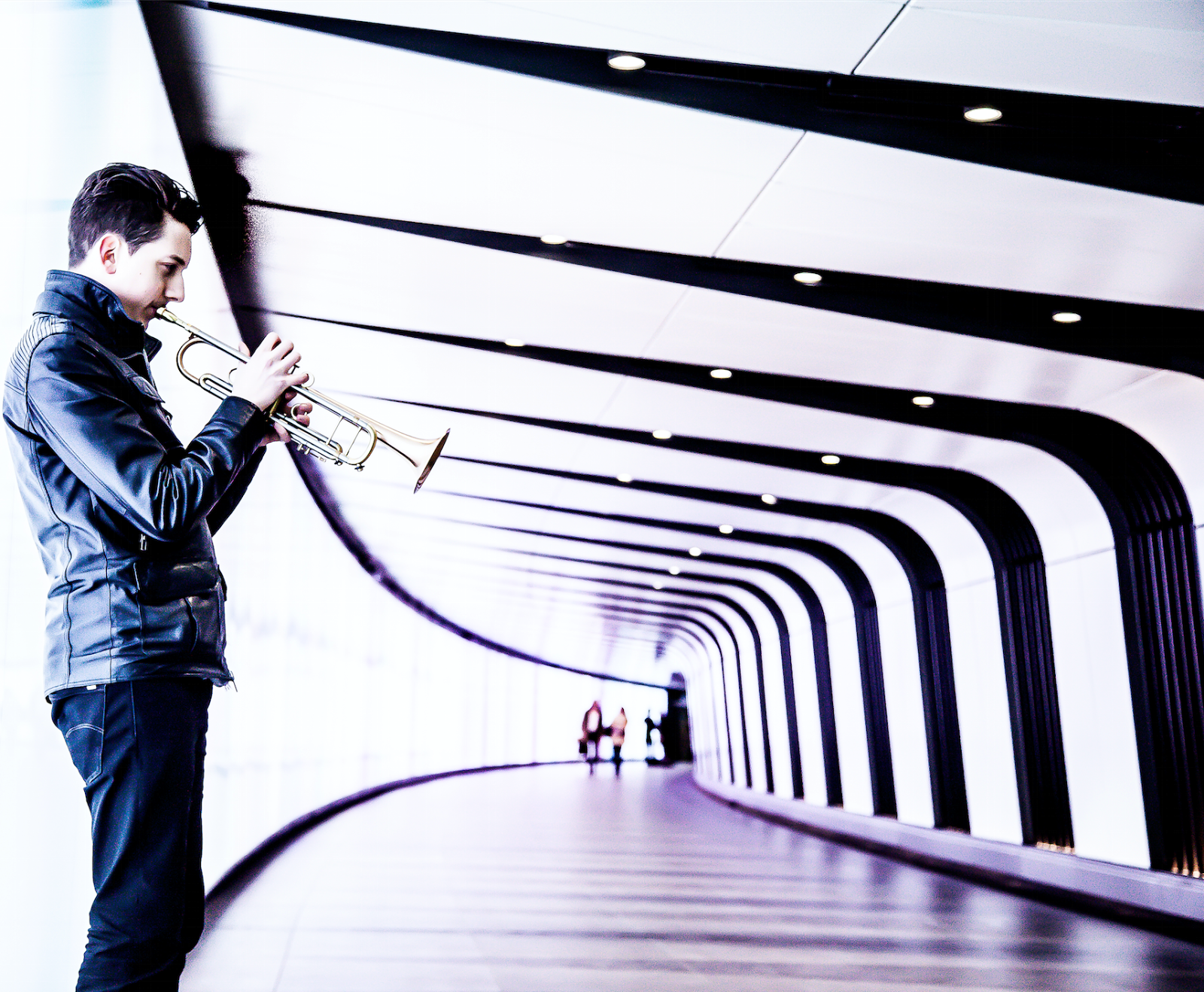