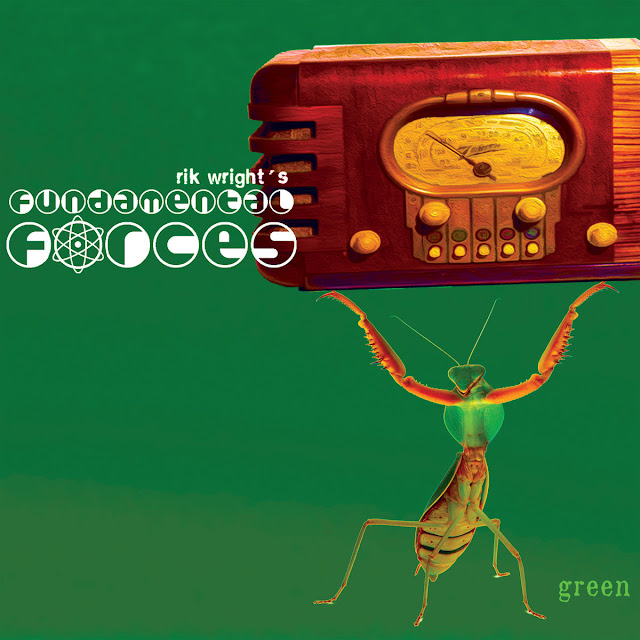 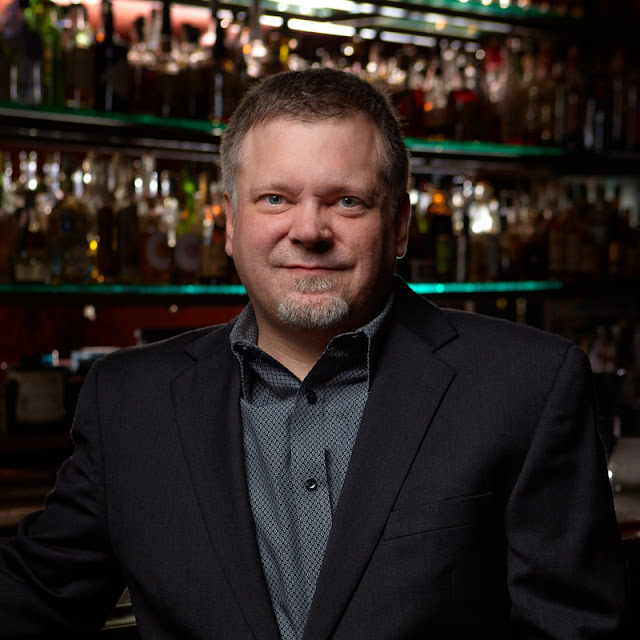 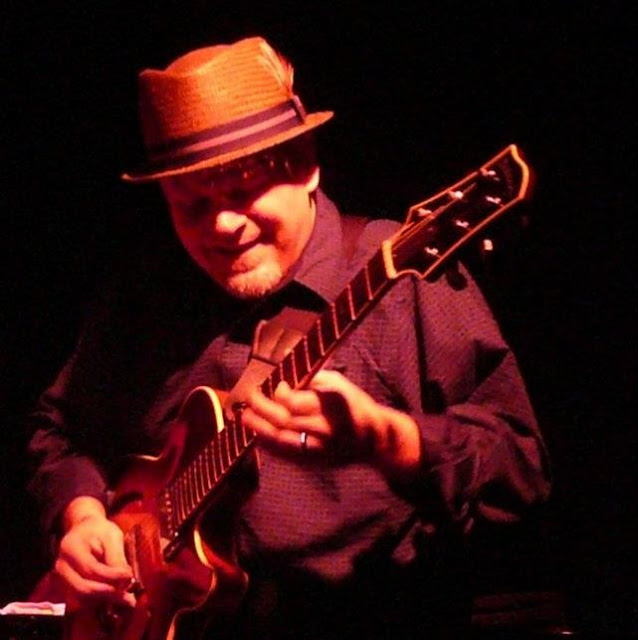 With the release of Green, Seattle-based guitarist and bandleader Rik Wright has reached the highest point of his career thus far. In completing the additive colors trilogy begun by Blue and Red (released 2013 and 2014, respectively), this album takes the unity shared with bandmates James DeJoie (reeds and flute), bassist Geoff Harper, and drummer-percussionist Greg Campbell, to its most intense levels of focus yet. As Fundamental Forces, the uncategorizable quartet continues to not only push the envelope, but also fill that envelope with a truly original songbook—signed, sealed, and delivered to the discerning listener. If Blue introduced the voice and Red gave that voice a stage, then Green is the mind that shapes its every note, signaling a giant cognitive leap into the future of an artist who breaks as many barriers as he brings together. 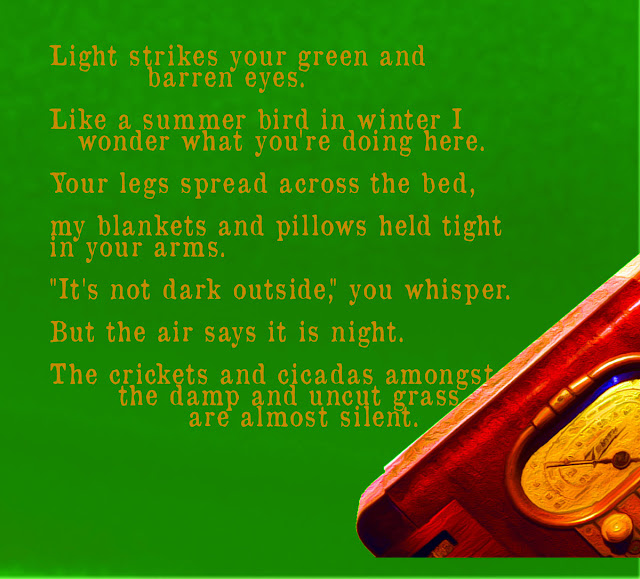 If there’s one thing you can count on in Rik Wright’s music, it’s a balance of abandon and meticulous control. Enchantingly, this fine line blurs even more for the third round, even as it comes across more boldly than ever. And in the track “Harmonic Tremor,” one can see just how far the band has come in that very regard. This tune follows the compositional formula that works so well for Wright, twining melodic reed work and bright drums around a core groove of guitar and bass, but takes it to unexpected places via DeJoie’s gritty baritonism, Wright’s elastic commentary, and Campbell’s artful shuffling. Such is the band’s commitment to equality, which through the vital contributions of its members forms a distinct whole. One hears it in DeJoie’s acrobatic alto playing (“Contradiction”) and in the lilting flute of his own “Alicia’s Waltz” (the only track of the set not from Wright’s pen). One hears it, too, in the rhythm section’s evocative pacing throughout “Patience” and “Sugar Crash.” Regardless of which musician you focus on, every contribution is more lucid than the last. 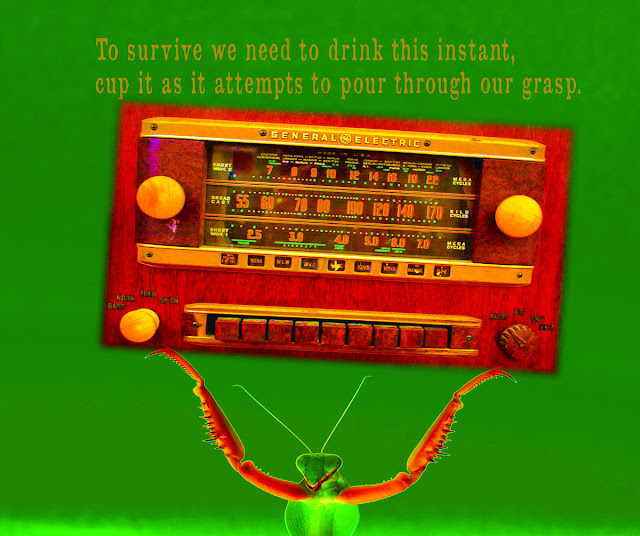 Wright’s music has always been characterized by its immediacy, and on Green, perhaps more than any other album, immediacy gilds the niche that Fundamental Forces has already carved. Be it relatively brief, as the emblematic guitar solo “Sunrise Pixels” and the concluding “Overcast” (in which Wright and DeJoie strengthen the sunbeams of their harmonic relationship), or expansive, as the 10-minute “Wanderous,” the quartet brings full, cinematic charge to its playing. The latter tune is a landmark achievement, unfolding patiently and featuring a beautiful color shift to clarinet. Here, as throughout the album, Wright’s guitar reveals its phases like the moon, taking on the light of a hidden sun and turning it into song. Despite, if not because of, the hefty length of this track, it pushes through space and time with the quiet grace of a comet. 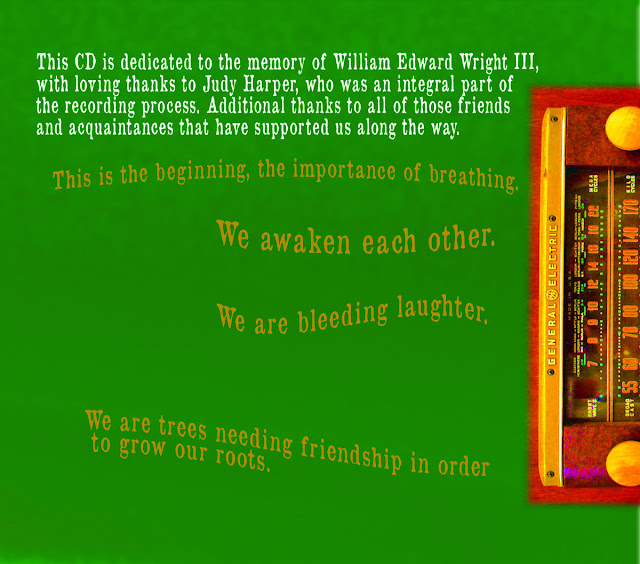 Although this album completes a broader project, it stands on its own feet as an example of a pure love of music making. And from this vantage point, the future looks bright for Wright indeed. 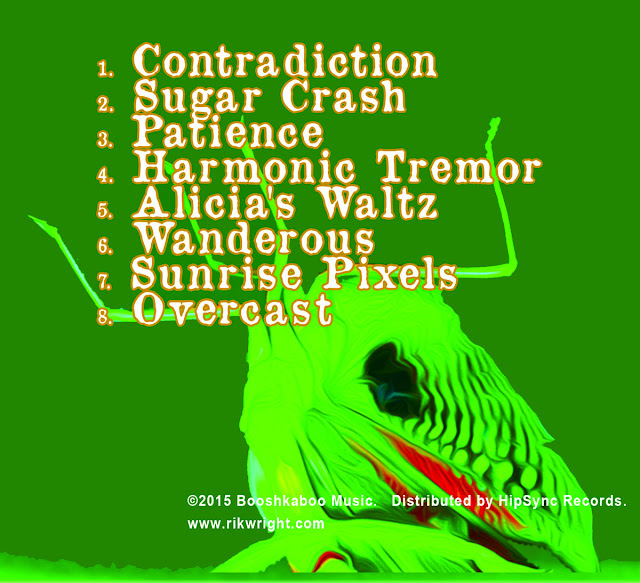 All songs written by Rik Wright
© 2015 Booshkaboo Music, distributed by HipSync Records, LLC
except for "Alicia's Waltz" written by James DeJoie and © 2015 Joiemusic.

This CD is dedicated to the memory of William E. Wright III, with loving thanks to Judy Harper, who was an integral part of the recording process. Additional thanks to all of those friends and acquaintances that have supported us along the way.

Arthur Vint & Associates - Through The Badlands (2016) 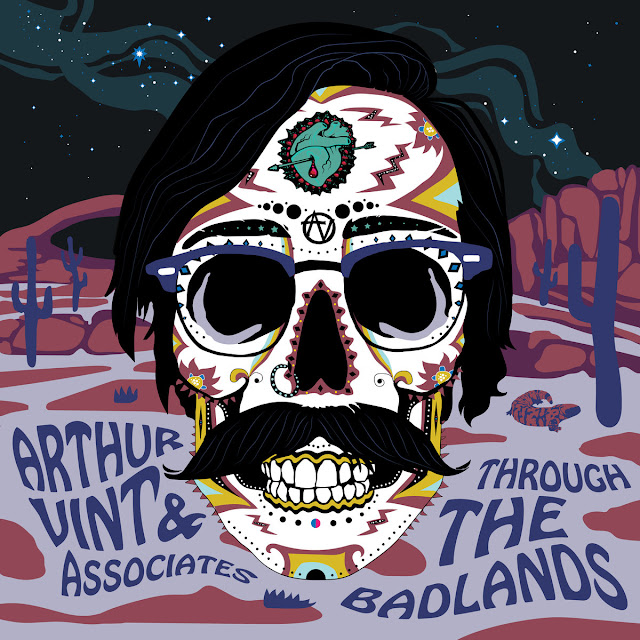 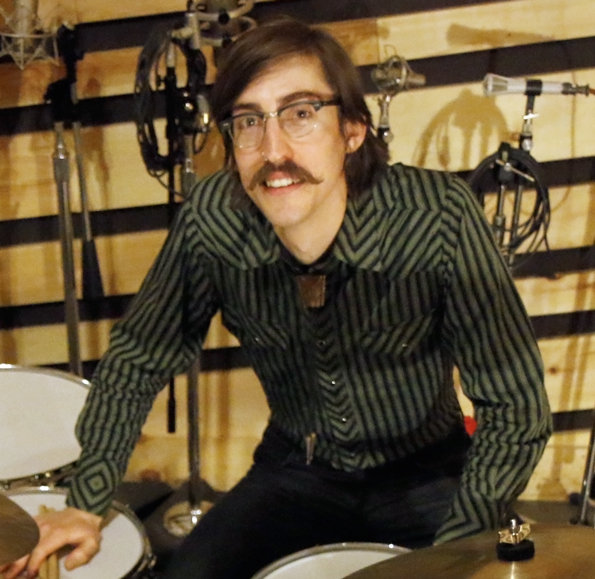 Arthur Vint & Associates - Through The Badlands

Arthur Vint & Associates went in to record "Through The Badlands" at the Bunker Studio in Brooklyn, NY on February 11th, 2015 and the album was mixed and mastered at Bass Hit Studio in Manhattan in April. Now the album is done. Es completo. C'est fini!  The only thing remaining to be done is to press these soundwaves into grooves and send them out into the world!  Once I reach my goal and manufacture the product, Ropeadope Records will add the album to their catalog and release, distribute and promote the album worldwide in January of 2016!  Ropeadope Records has been around since 1999 and is a progressive, artist driven record label that has released albums by Antibalas Afrobeat Orchestra, Tin Hat Trio, MMW, Sex Mob, Snarky Puppy, and Christian Scott.  I'm thrilled to be in such good company!

So far, I have invested 100% of my own funds into this project, but am now looking for some help. By pre-ordering a copy of "Through The Badlands" on CD or vinyl you can help finish finance this project - and be one of the first people to hear it!  I am aiming to raise $2,500, which will help cover the expenses of manufacturing the physical CDs and LPs.  If I'm able to raise more money than this, than I may be able to cover all the manufacturing expenses...

That's it!  I've already paid for everything else myself in cash, so this is the final frontier. 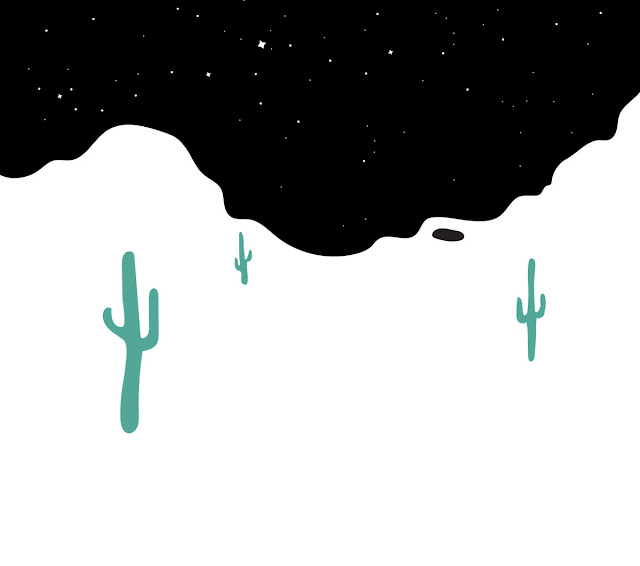 My "rewards" are pretty straightforward: I'm basically using this campaign as a pre-order method for the album in different formats.  However, there will be a few extra "perks" as well.  The album artwork is currently being designed by my brother in-law Eric W Palmer and the drafts that he's sent me look uh-maz-ing, so I'm going to print a limited number of posters with the artwork (and maybe some T-shirts) that can be ordered here as well.  Also, If you live in the New York City area and donate $150, you will be invited to a private cocktail/listening party!  Not only will you get to imbibe fancy cocktails made by yours truly whilst listening to my new album, but you will get to HANG OUT WITH MY BABY SON HENRY!!!!  You can even hold him if you want and change his diapers for no extra cost!!  (For those of you that don't know, I'm a bartender at the world famous Village Vanguard jazz club...my drinks are LEGIT.)

I'm extremely proud of how this record turned out and am still blown away by the sounds and performances that were captured in the studio. I'm already at work planning what's next for this band, but first thing's first - getting this record out.  They say no one buys music anymore - prove them wrong and pre-order my album!

(In addition to pre-ordering a copy of "Through The Badlands," please consider spreading the word to those you may think would be interested in this music - or buy an extra copy for a friend!!)

Originally from Tucson, AZ, drummer Arthur Vint has lived in the New York area for eight years where he has established himself as an in demand session musician for projects spanning jazz, latin, country and rock genres. His debut album as a leader, "Through The Badlands" draws upon all these influences and is the culmination of several years of composing and arranging for his unique ensemble that features violin, harmonica, tenor saxophone, bass clarinet as the lead voices, with accompaniment by the more traditional rhythm section of guitar, piano, bass and drums.  The songs conjure images of his native southwest mixed with the hustle of New York City...

Although he has played drums on over 25 albums, this marks Arthur's first official release as a leader. The band he assembled, Arthur Vint & Associates, includes Rich Perry on tenor saxophone, who was a teacher of Arthur's at both William Paterson University and the Manhattan School of Music and has one of the most distinctive and recocnizable voices on the instrument today. Tony Scherr, perhaps better known for his bass work with Bill Frisell, plays guitar on the album and Jon Cowherd, of the Brian Blade Fellowship, plays piano and Hammond B3. Blanca Cecelia Gonzalez brings her beautiful style and interpretation on the violin and Yvonnick Prene plays some truly inspirational chromatic harmonica. Fellow Tucsonans Andrew Halchak and Ian Stapp join on bass clarinet and upright bass respectively, both of whom have been musical collaborators with Arthur since their high school days.

This stellar lineup gives life to seven of Vint's original compositions and two of Ian Stapp's, as well as Vint's arrangements of songs by Neil Young and The Sons of the Pioneers.  To some, these songs will surely fall into the "jazz" category as they are instrumental and prominently feature improvisation, but the album taken as a whole is truly un-categorizable.  We hope you enjoy the music! 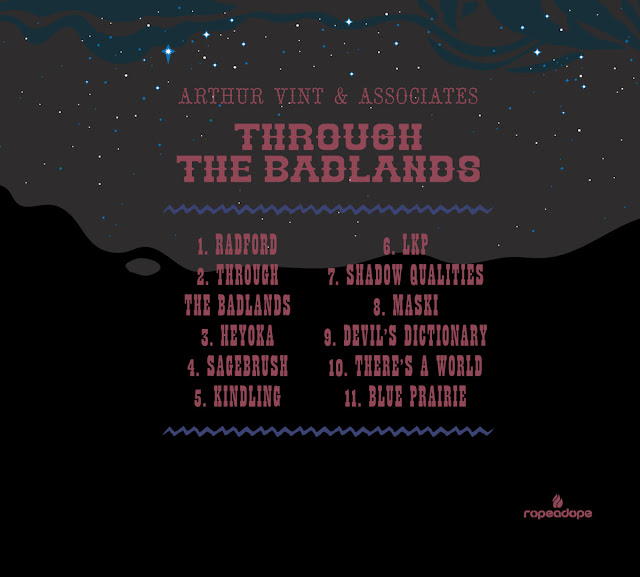 Arthur Vint & Associates’ debut album “Through The Badlands” evokes visions of the western American landscape, with its vast open expanses and rocky terrain.  Rooted in the great American traditions of jazz and rock ‘n’ roll, the album weaves contemporary influences with vintage country as well as traditional Native American spiritual music, drawing on the images and sounds of Vint’s childhood growing up in Tucson, Arizona. Vint’s diverse influences on this album range from Neil Young to Thelonious Monk, Marty Robbins to John Coltrane and beyond. 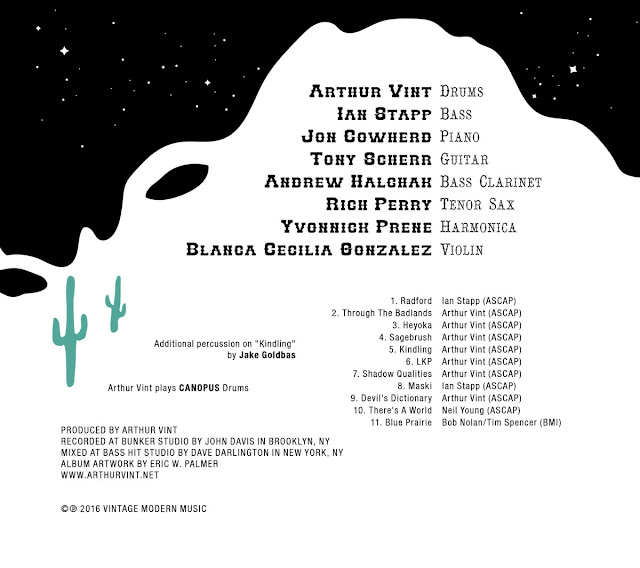