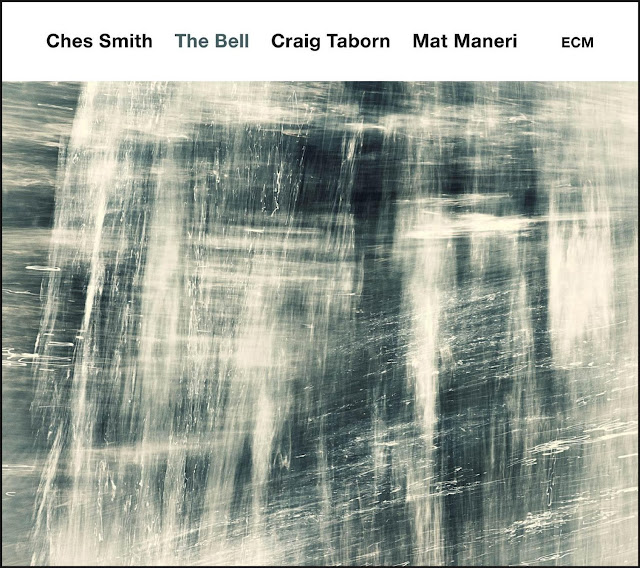 Ches Smith is best known to indie rock liner-note devotees as a percussionist who has appeared on over half a dozen Xiu Xiu releases (going all the way back to Knife Play). In recent years, he’s been consistently active on the contemporary jazz circuit—lending his talents to a series of celebrated albums by artists such as guitarist Mary Halvorson and saxophonist Tim Berne. The music of both those composers occasionally strays close to avant-rock, which helps explain Smith’s in-demand status around jazz’s cutting-edge galleries. But he also led those bands through quieter, softer passages, proving his depth and range.

For his first album as a composer and bandleader on Germany’s iconic ECM label, Smith has chosen a subtlety that seems influenced by his most recent bandmates and peers. It’s a stylistic course that will be broadly familiar to fans of Manfred Eicher’s jazz-and-classical imprint, and less so to fans of Women as Lovers. But The Bell isn't placid, either: In the company of pianist Craig Taborn and violist Mat Maneri—an experienced pair of collaborators—Smith forges a quiet intensity. There’s heat here, even if it takes some time to feel it. 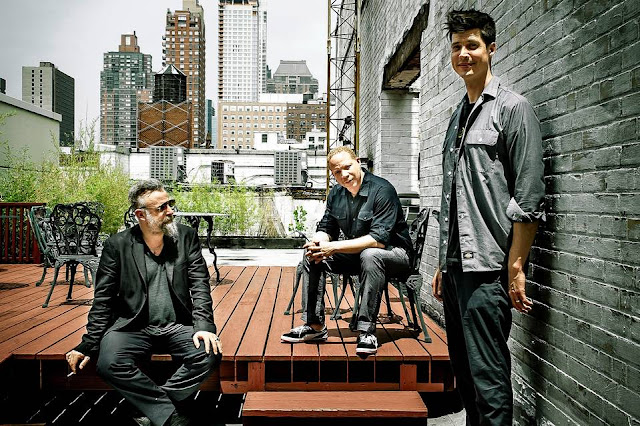 Things begin calmly. The album’s title-track opener announces itself with a lone, delicate smack of pitched percussion, before the other players enter. Though the nine-minute piece never strays very far from a static and spacious feel, there’s often something new happening: Smith moves from the bell-like elements in his kit to some vibraphone shimmers, or thrumming timpani playing. Maneri moves from a low drone on his viola to high-pitch wisps of brief, almost-scratchy timbre. Collectively, the group’s sound is constantly tempting you into a false sense of ease that individual players delight in subverting with little tics—adding extra notes to minimalist phrases before they become too predictable.

While all The Bell’s tracks were composed by Smith, the group’s status as "an improvising trio" is clear during "Barely Intervallic," a cut where Smith indulges skittering, freer playing. "I’ll See You on the Dark Side of the Earth" and "I Think" follow the big-canvas, pensive-but-driven feeling of "Isn’t It Over?" In the album's final third, "Wacken Open Air" gives up its theme right away, the better to let us hear the group work the spare material into a potent acoustic riff. Maneri deals in some lyrical soloing toward the end of "It’s Always Winter Somewhere." And the finale, "For Days," re-establishes the set’s quiet equilibrium.

The largely hypnotic, not-quite-repetitive quality of the music will, for some listeners, call to mind Taborn’s own Junk Magic, an early-21st century triumph of electrified chamber jazz (and an album that also featured Maneri). But The Bell isn’t just some less kinetic, acoustic redo of that project, with Smith holding down the percussion chair. Despite the album’s restricted range, it suggests a malleable aesthetic, likely the result of the year and a half these improvisers put in together before recording their debut outing. You can imagine this band doing a wide variety of impressive work, in the very near future: perhaps adding in some electronics, or including compositions from all members. But for now, it’s persuasive enough as a demonstration of Smith’s continued career shift into contemporary jazz. 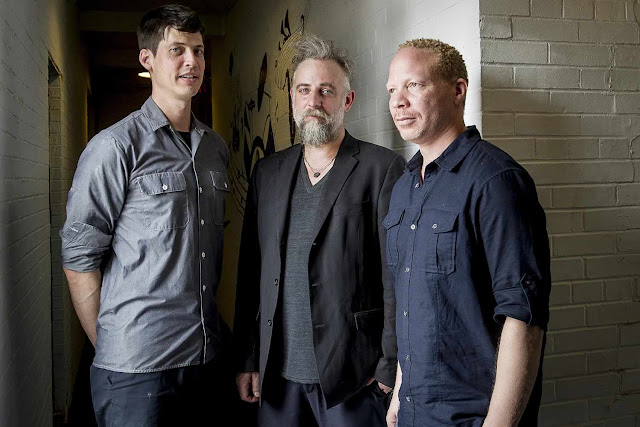 The Bell
Barely Intervallic
Isn't It Over?
I'll See You On The Dark Side Of The Earth
I Think; Wacken
Open Air
It's Always Winter Somewhere
For Days 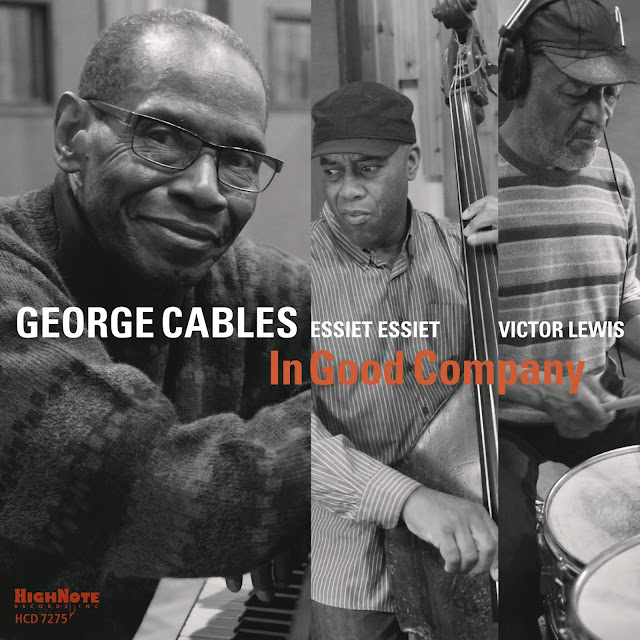 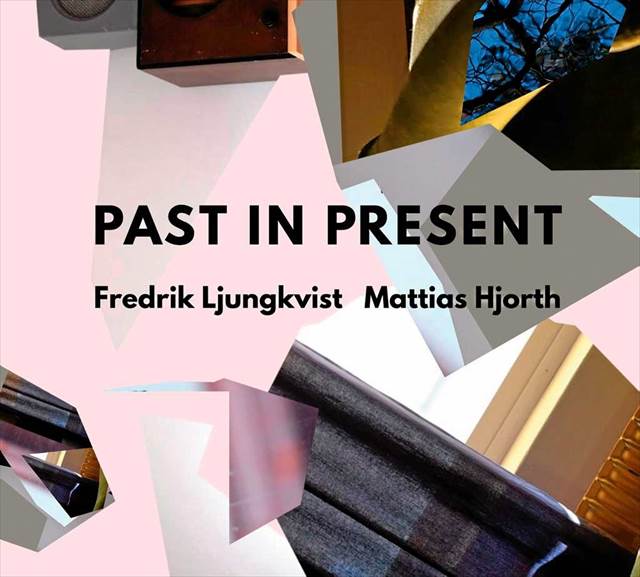 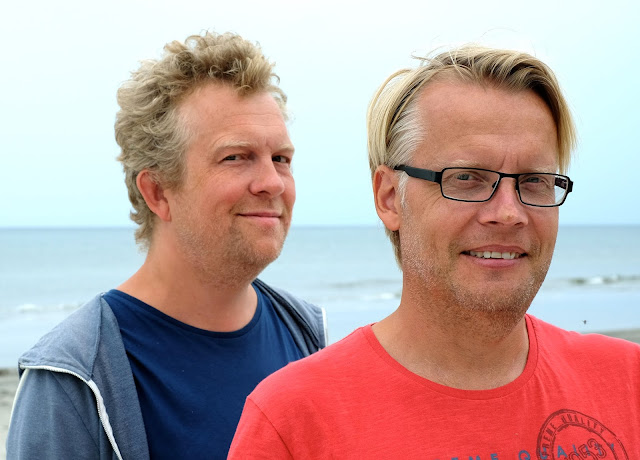 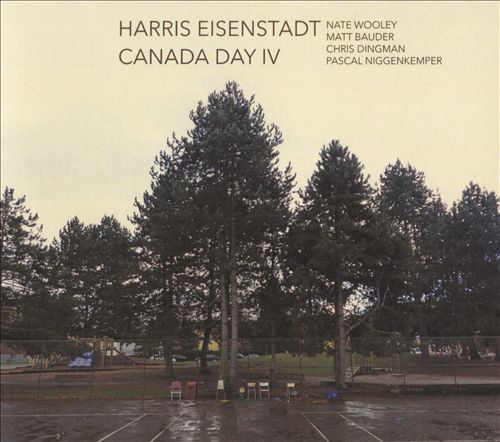 Canada Day III made many best of 2012 lists. In the meantime, award-winning drummer Harris Eisenstadt launched a new group, Golden State (with two releases on Songlines). Now his longest-running band returns with its most accomplished album yet, a thoroughly entertaining, provocative program of original compositions that blends swinging modern jazz and spikier, off-center avant-jazz styles. The band’s idionsyncratic sound world features close percussive/textural interplay between gorgeous vibist Dingman and Eisenstadt, who leads from the kit almost like a modern-day Art Blakey. Frontline soloists Wooley (whom Dave Douglas has called “one of the most interesting and unusual trumpeters living today”) and Bauder (who recently toured for a year with Arcade Fire) play the whole jazz/improv tradition with great verve and character. Pascal Niggenkemper has taken over the bass chair, and the arrangements allow for many more small groupings than before. This eager, quick-witted bunch (highly respected bandleaders all) take full advantage of their opportunities with playing that frequently elicits smiles for its daring and abundant good humor. As Harris says, “I do think we’re at our best when there’s a palpable sense of high-wire negotiation of written and improvised materials happening. There’s a congeniality amongst us that is also palpable. I value that looseness and trust within the group very much. If you’re not enjoying yourselves together, why bother?”

Harris recaps the band’s history and current direction: “Canada Day’s first gig was at Jim Carney’s Konceptions series in Brooklyn on July 1, 2007 ­– Canada Day. My original intention – really, what motivated me to move back to New York in 2005/2006 (I lived in New York from 1998-99 before moving to California for seven years) ­– was to have a working band. I wanted to find the folks who would work together well, stick with it and develop a group concept incrementally. The group concept has changed over time as I’ve changed over time, but the core principle has remained basically the same: a quintet of standard instrumentation (with vibraphone slightly less traditional than piano would be) that could be a long-term vehicle for a variety of compositional structures and improvisational strategies. For Canada Day IV I wanted to go deeper into the possibilities of solo, duo, trio and quartet spaces within the ensemble. And rather than have stand-alone small group pieces, I decided to incorporate these different pieces into larger wholes, to keep shifting amounts of sonic information, weight and scope. As for my drumming, I continue to draw inspiration from non-drumset rhythm concepts, polyrhythmic traditions of Africa and the Diaspora, and particularly Cuban batá drumming these last five years.” 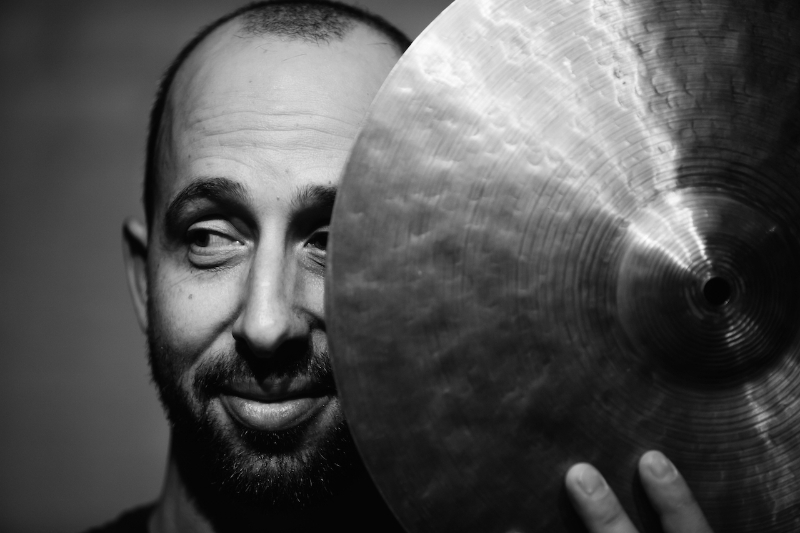 About Pascal Niggenkemper Harris has this to say: “Pascal is a fantastic interpreter, reader, creative pattern varier, and a very adventurous improviser. Playing grooves with him feels great, as does improvising textures. I would say his playing probably incorporates more extended techniques than the other Canada Day bassists. So he has this really far-reaching creativity plus that intangible thing which everybody loves about a great bass player: he makes the music feel good.”

A few notes on some of the pieces and their titles: “I started writing “After Several Snowstorms” one morning during the winter of 2014 when New York was getting dumped on. The opening bass line (which quickly morphs during the opening tenor solo and returns briefly at the beginning of the full ensemble material) has three groups of two notes… a series of one-two punches. “Sometimes It’s Hard to Get Dressed in the Morning” and “Let’s Say it Comes in Waves” both reference our son Owen, and the challenges of parenting. “Life’s Hurtling Passage Onward,” What Can be the Set to the Side” and “What’s Equal to What” all come from the same Richard Ford passage that “The Arrangement of Unequal Things,” the first track on Golden State II, came from. “Meli Melo” is actually the French name for a Canadian snack mix called (in English) “Bits and Bites.” I started writing the book for Canada Day IV with a bunch of short pieces – some of which became duet pieces within longer structures, and two that ended up making up this last piece on the record – and they all had the title “Bits and Bites” with numbers assigned to them.

As I tried to find a title for these last two parts that came together as one piece, for some reason an image of the red bag with “Bits and Bites” on one side and “Meli Melo” on the other came into my mind. Shreddies, peanuts, pretzels, and cheese crackers all mixed up together and over-salted. A little Canadian nostalgia, I guess.”

Canada Day IV will next perform as part of Eisenstadt’s residency at The Stone from September 1-6. For more information: www.harriseisenstadt.com. The interview is linked from the Songlines release page. 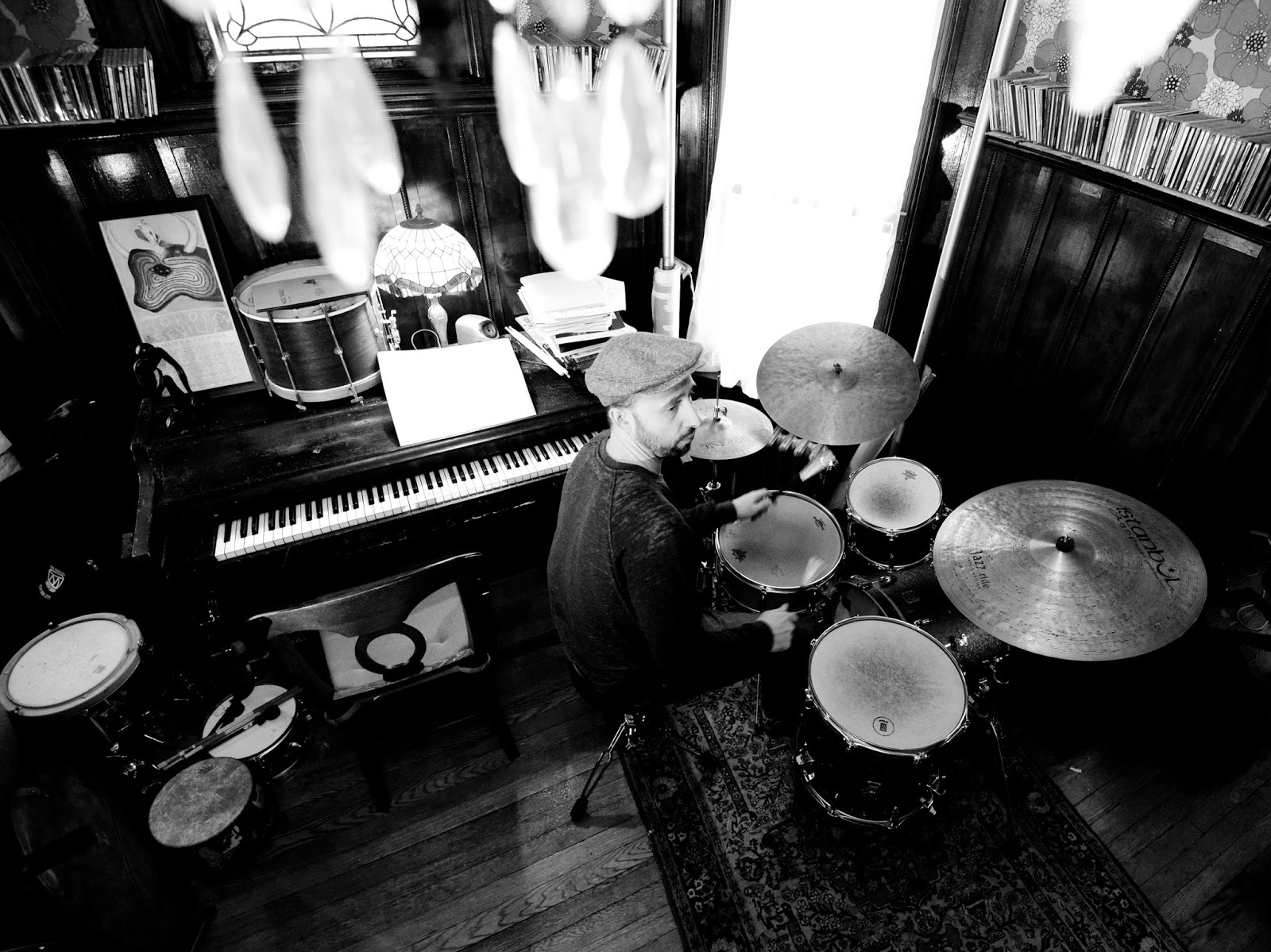 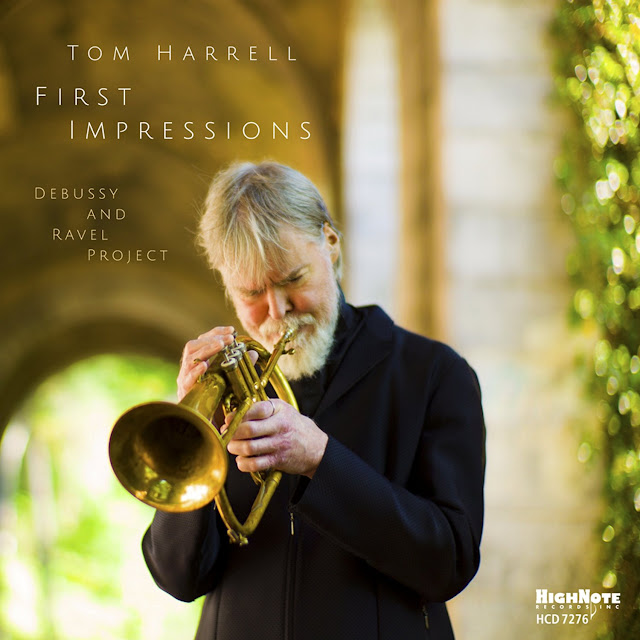 "Both Debussy and Ravel transformed the world of music by creating a new sensibility of beauty of sound," says trumpeter/composer, Tom Harrell, who himself is known for his superb lyricism and poetry in his playing and writing. "I am attracted to their music because of their use of Afro-Hispanic and Afro-Cuban rhythms and melodies. I am also deeply influenced by tone poems, so writing arrangements for a project that explicitly celebrates two of my favorite French composers, Debussy and Ravel, makes complete sense to me. I was thrilled to write extended forms that are rich in modal harmonies."

For Harrell, this project is a natural progression in his musical odyssey. His affinity for the European classical tradition is apparent in some of his previously recorded works. 'Majesty" (LABYRINTH, RCA 1996) "Baroque Steps," and "Morning Prayer, Part 1" (PARADISE, Bluebird/BMG 2000) and "Snow," (WISE CHILDREN, Arista/BMG 2003) are some of the pieces inspired by European classical music. 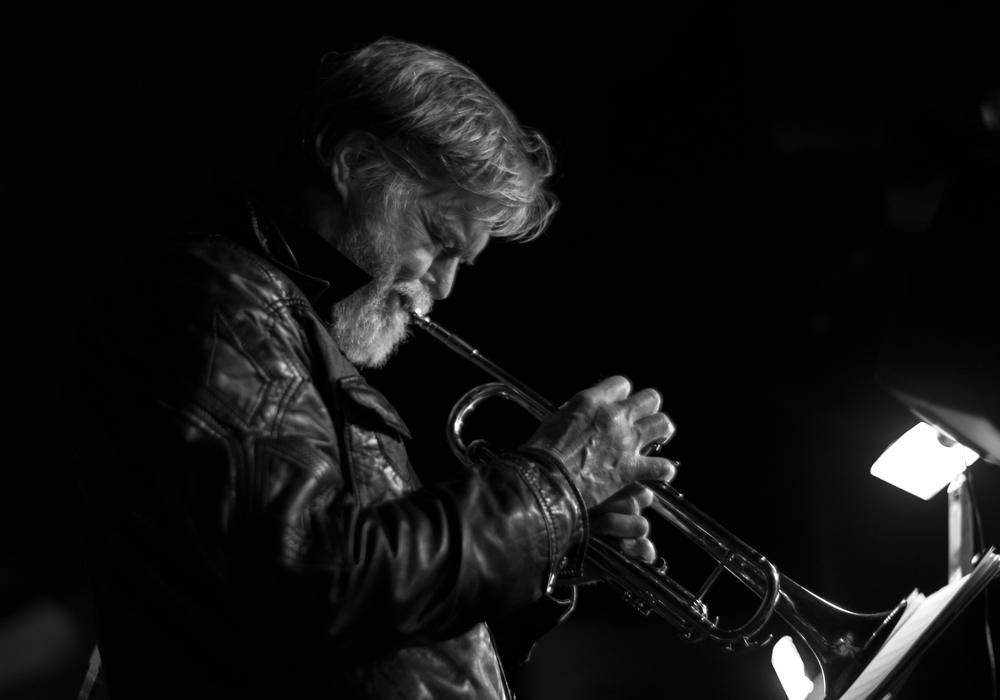