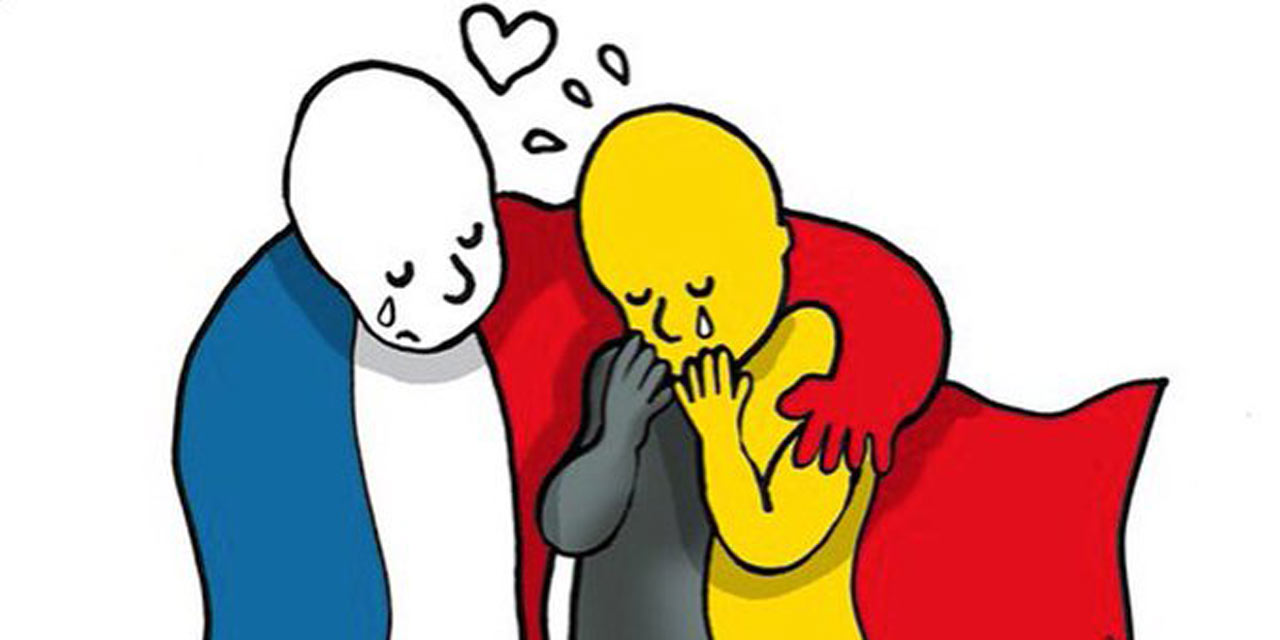 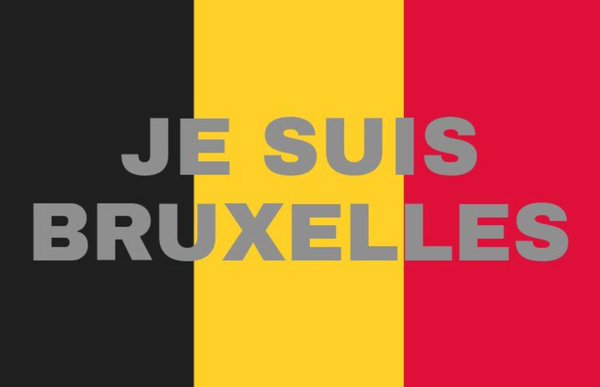 Posted by Republic of Jazz a la dirección 9:43 PM 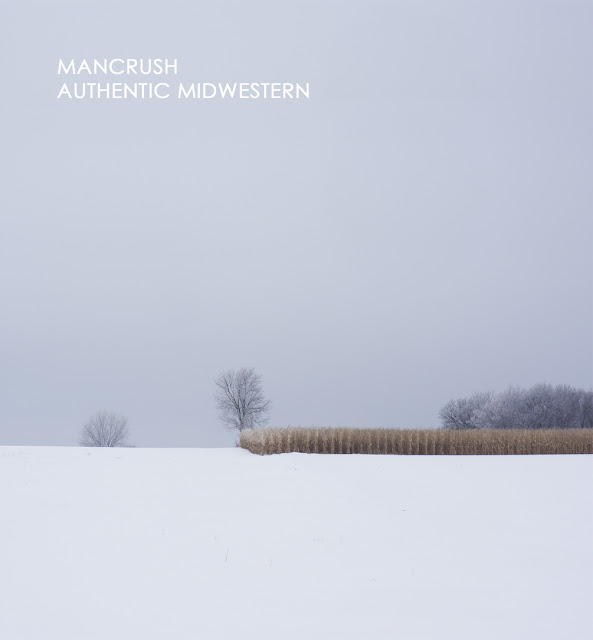 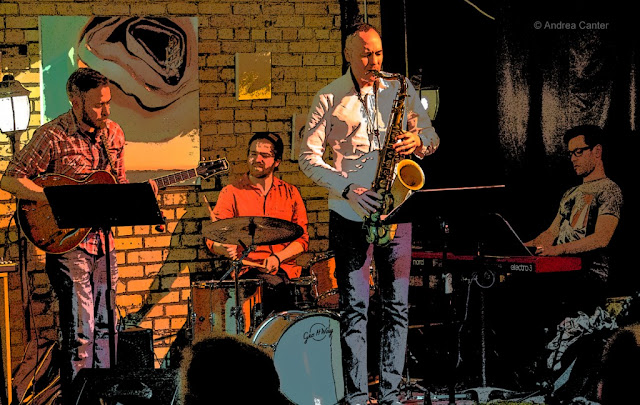 Launched just a few years ago under the leadership of drummer/composer Lars-Erik Larson, Mancrush has become a popular and formidable ensemble on the Twin Cities jazz scene, playing everything from folk tunes to Bartok, as well as Larson’s eclectic original compositions. With Bryan Nichols on keyboard, Brandon Wozniak on tenor saxophone, Zacc Harris on guitar, Mancrush will release its debut recording on Friday, March 18, at Vieux Carré. Authentic Midwestern boasts Larson’s penchant for melding the influences of folk music and modern minimalism with 21st century jazz improvisation–engaging melodies atop simple harmonies with a strong sense of ensemble collaboration. 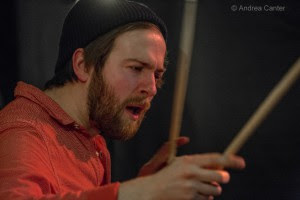 Larson notes that Mancrush originated as a one-off at the Jazz at Studio Z Winter Jazz Festival in 2014. Still relatively new in town, Lars was approached by Jazz at Studio Z curator Zacc Harris, “to put together a set of Young Lions’ music…he asked me who I wanted for the band, and he set it up.” The chemistry and the music propelled this one-night stand into an ongoing, popular ensemble that has performed at Studio Z, the Black Dog, Nicollet, Icehouse and more.

Lars-Erik Larson is a drummer and composer based in St. Paul. Larson earned his Master’s Degree in Jazz Studies from the University of Illinois (Champaign-Urbana), where he studied with renowned drummer Dana Hall. After completing his degree in 2012, he moved to the Twin Cities where he has played with many local bands, including the No Coast Quintet, Zacc Harris Trio, the Thomas Nordlund Group, and recently in Bryan Nichols’ Trio with bassist Cody McKinney . About a year ago, he opened an evening at the Black Dog with the debut of Ramtrack, a trio with guitarist Nordlund and trumpeter Jake Baldwin. The new Mancrush album features compositions Lars has written over the past two years, and he is busy writing new material for the band. 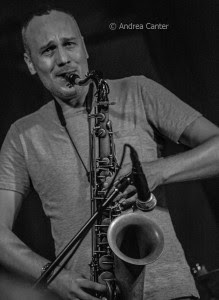 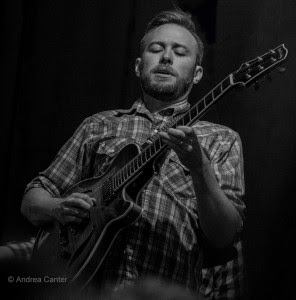 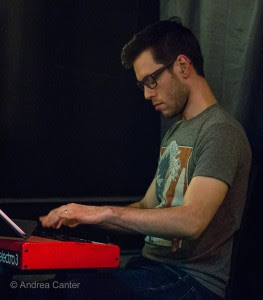 Pianist Bryan Nichols returned to his native Minnesota after studies at Iowa State and gigging in Chicago. A member of the 2004 edition of Betty Carter’s Jazz Ahead (“Jazz Stars of Tomorrow”), he performed at Kennedy Center in Washington, DC. He’s played with Ari Brown, Maurice Brown, Von Freeman, and more, and has taught at the MacPhail Center for Music and University of Wisconsin-Eau Claire. Locally Bryan is heard with his own trios, quintet and large ensemble, We Are Many; and has performed with the Zacc Harris Group, Bates/Nichols/Bates, vocalist Nancy Harms, drummer Dave King, Todd Clouser’s Love Electric, and other cutting-edge artists. He’s a frequent duo performer on weekends at the Icehouse. Bryan was a 2010 recipient of a McKnight grant and released Bright Places in 2011. A new solo recording is due for release this summer.

For the Mancrush debut album, leader Lars-Erik Larson selected 10 original compositions and an arrangement of Bartok’s “Five Hungarian Folk Tunes, No. 1.” The influence of Bartok as well as world and American folk melodies–roots of the American Midwest– can be heard throughout the set, along with the vibe of modern rock, pop and improvised musics. The opening track (“Ghosthunter”) sets the stage, starting out with driving drums pushing the keyboard as if the start of a circus soundtrack that soon shifts into engaging, dream-like passages that echo Debussy or Ravel, ultimately moved into the 21st century by Wozniak’s wandering, soaring tenor. The closing “Don’t Be So Sure” completes the dream. In between we’re given strong melodies that could support pop lyrics (“High Off the Hog,” “Your Green Thumb Is Showing”) or cartoon features via head-bobbing folky rhythms (“Heg”). The arrangement of Bartok’s “Hungarian Dance No.1” offers a whirling dervish of East Euorpean harmonies, with Larson’s assertive punctuations particularly effective.  The sweet melodies and lazy motion of American folk and country inform “They Call Me a Friend of the Golden Dogs” and “Love Now,” the latter with Wozniak at his most melodic and soulful, while the saxophonist’s slippery sweet tenor complements Nichols’ elegant keys on “Late Nights NE.” The tenth of the eleven tracks, “Pink House” seems to draw on many of the elements of the previous tunes, from soft rock to folky Americana and another showcase for Wozniak. 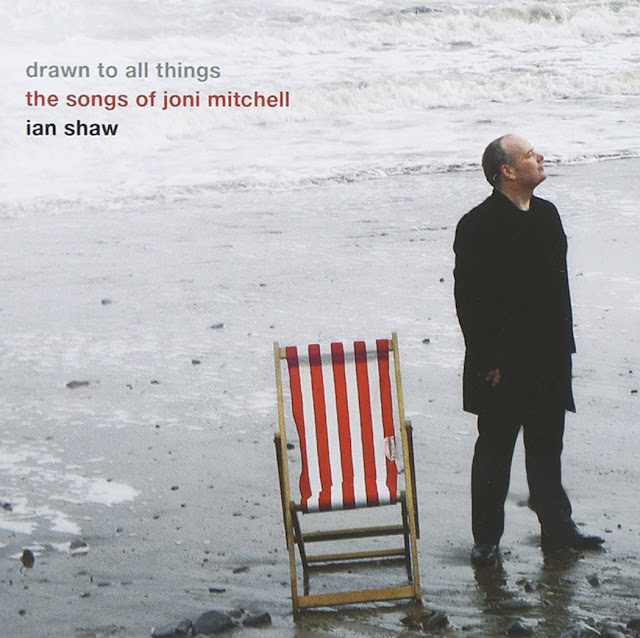 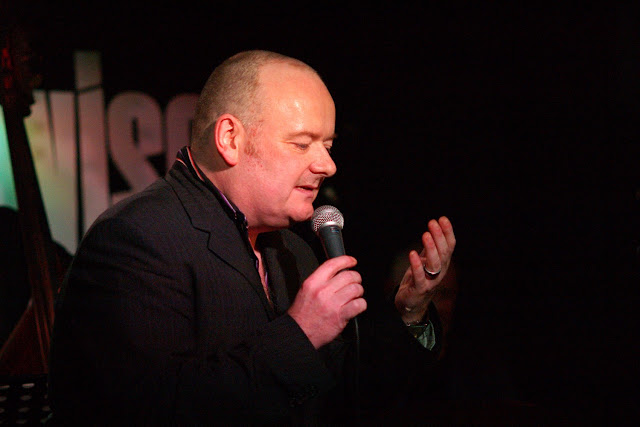 Sometimes an album just comes out right: an artist on top of his game, at one with material he loves but doesn't let seduce him, aided and abetted by a producer able to go lush or intimate, guests who are really close friends and a "band that plays so sneaky you can't help how you feel". As Joni might say. "Drawn to All Things", Ian Shaw's first UK recorded album for a decade is just one of those releases. A celebration of the Joni Mitchell songbook, this isn't Mitchell "done" jazz any more than it's Shaw gone West Coast rock; it's just (just!) a gloriously musical album, with Shaw particularly drawn to Mitchell the story teller; listen to how Shaw teases out the scurrilous tale of Harlem in Havana, with Shaw the actor (and comic) able to dramatically recreate the song, not just sing it. And his band are dramatic players in the story too, with Lea De Laria as the scatting MC or Guy Barker's trumpet shouting out loud as, um, a fairground barker.

Shaw also opens out the vulnerability and the joys in Mitchell songs; A Case of You here is as naked as the original "Blue" version, while by contrast Chelsea Morning brims butterscotch full of joy. Indeed, although both Mitchell and Shaw have (undeserved) reputations as gloomy folk, one of the glories of this album is how even in the darkest moments there's a note of beauty to be found, like the moon at the window. The thieves can't take that away. Whether "Drawn to All Things" can do "a Norah Jones" for Shaw is neither here nor there. But if you want an album that's about touching souls, then look no further. A fine album. 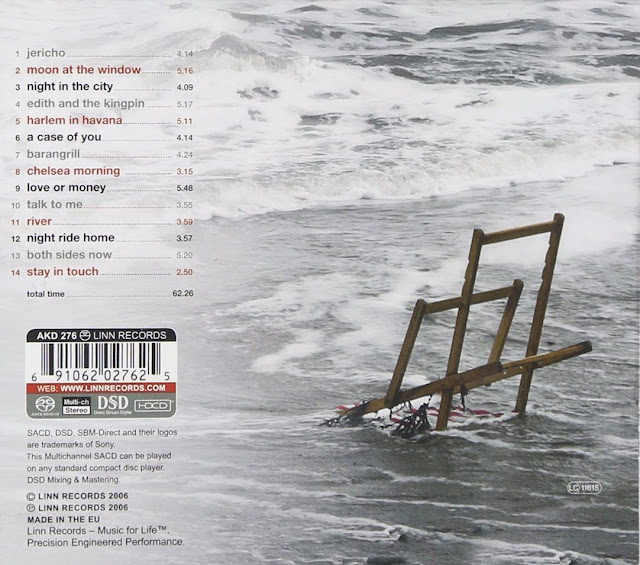 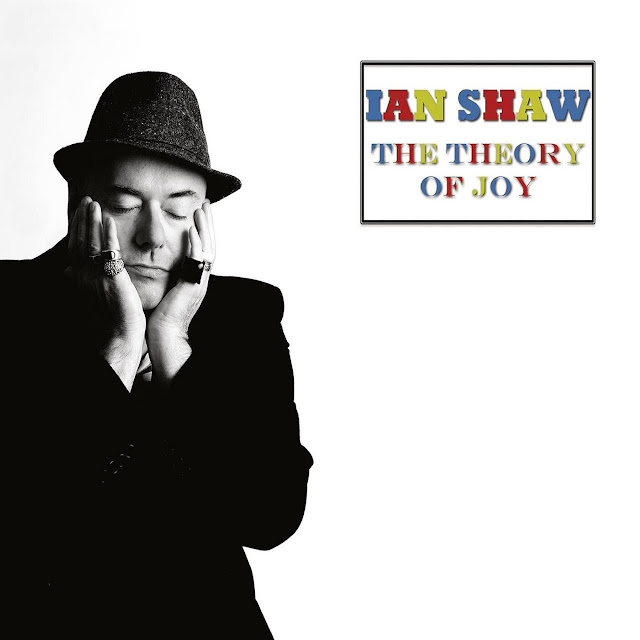 This CD finds Ian Shaw not sitting in his apparently natural habitat at a piano, but having replaced his own accompaniment with an excellent trio. There is no doubt that Shaw is a good pianist, but this format seems to free him upto really focus on his vocal performance - which he does with accuracy and aplomb.

The 12 tracks on the CD version show an excellent mix of material from Bart to Bowie, plus three Shaw originals. The opening Small Day Tomorrow (a useful concept for the jazz enthusiast, staying up late as you only have a small day tomorrow) quickly opens up to allow Barry Green to sparkle on piano. Shaw's voice seems to have something of the light touch and agility of Joni Mitchell about it, and this becomes even more clear on the Canadian artist's own In France They Kiss On Main Street. The section in which Shaw sings over Mick Hutton's round-sounding bass and Dave Ohm's tight-yet-dynamic brushes is a particular delight.

The Bowie song is Where Are We Now, from 2013's The Next Day album. This is a wistful song, looking back with a little regret, and Shaw turns in an impassioned performance. The album was recorded in summer 2015 before the shock recent news of Bowie's death, and the number makes a very fitting tribute. Mick Hutton must surely produce the most sonorous double bass tone in London, and he uses it to great effect here and throughout the album. This reflective mood carries on into Legrand/Bergman/Bergman's How Do You Keep The Music Playing, a song of love an uncertainty looking into a long-term relationship which Shaw renders beautifully -tears in this listener's eyes at any rate.

The three original songs come grouped together towards the end of the album. My Brother, about Shaw's brother Gareth who died before Ian was born, is catchy and meaningful. It's been rightly receiving radio plays - check out the video link below, which ties it in to Ian's work with refugees in Calais. All This And Betty Too is a jazz-filled romp with Shaw remembering listening to Betty Carter in Ronnie Scott's with Claire Martin, a long-term friend who also produced this album. A trio reworking of Somewhere Towards Love (chosen in its solo version as a Desert Island Disc by both Molly Parkin and Julian Clary) sees the song moving with a little more urgency, and it's great to get another way to hear it. As if to stress Shaw's versatility, we move from a pointed You've Got To Pick A Pocket Or Two (sung with social comment in mind, surely) to a closing If You Go Away/Ne Me Quitte Pas, in Brel-ish style over Green's solo accompaniment.

This collection has great variety, yet is defined at its core by four top-class musicians on their own terms. If, like me, you have enjoyed Ian Shaw's live performances but never yet taken the plunge with an album, this is a wonderful place to start. It's also available on double vinyl with three bonus tracks including Clive Gregson's Last Man Alive and Mel Tormé's Born To Be Blue. Cracking. 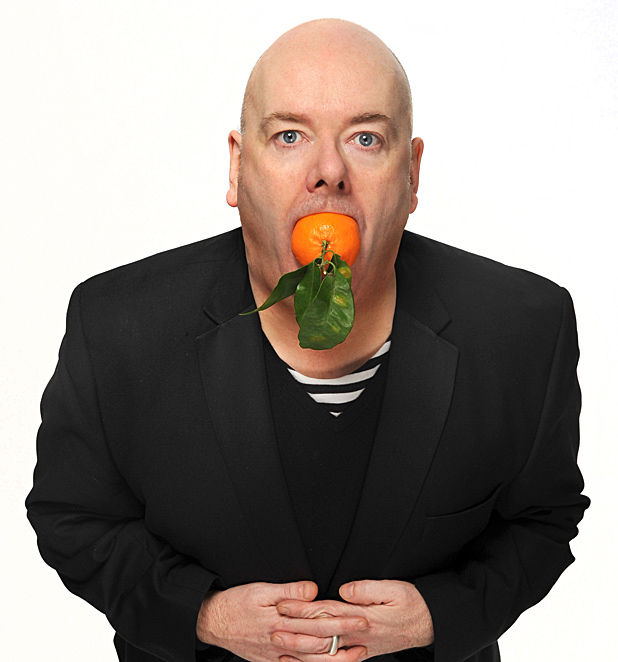