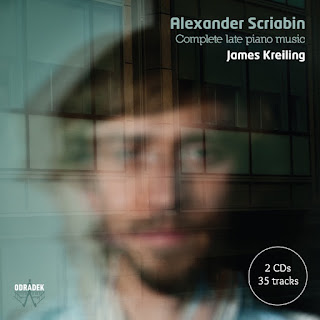 When I first became enamoured with Scriabin' s music, 18 years ago, his late works were still dismissed by many students and teachers (in the UK at least) as mere curiosities. Audiences would look back at me, perplexed. Some would even scoff when I explained his ideas regarding art and existence. Of course, this was not everyone’s reaction, but it has been a regular experience. I find this perception of his music unfair: for me, Scriabin’s late works are some of the most extraordinary, original, and beautiful music I know, and demand to be taken seriously...It is art’s transformative capacity which Scriabin develops. He wanted his art to unite people, to break down the barrier between audience and performer, just as music is able to cross social and cultural divides. 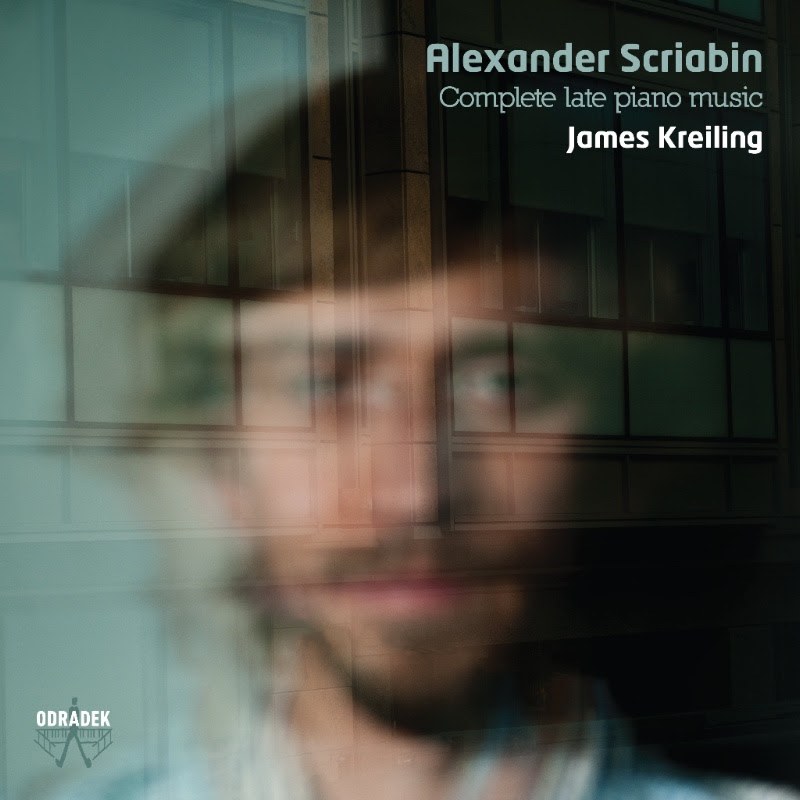 Scriabin was a master of the miniature, and these short works make up the majority of his musical output. To listen to Scriabin’s late music is to enter a different world, a realm of suggestion, seduction, delirium, dance, beauty, even terror. Within 20 years, his music had developed from the romantic miniature, influenced by Chopin, Schumann, and Liszt, to music which extended tonality to its limitations.

The late miniatures heard on this release are perhaps the best place to start if approaching this music for the first time. More than just musical experiments in preparation for the longer sonatas, they are perfectly contained musical worlds, each entirely different and unique from the others. They range from more extended works such as the dream-like, half-lit world of the Poème-Nocturne, to rarely-heard gems such as the Feuillet d’album, the Quatre Pièces, and Scriabin’s exploration of the intervals of the 9th, 7th, and 5th, in the Trois Études, Op. 65. Most of Scriabin’s miniatures were published in contrasting pairs, emphasising a key element of his late style: opposites and contrast. The concept of opposing forces is found throughout Scriabin’s thinking, taking on many forms: impulsive, energised and fiery, versus languorous, beautiful, seductive; or as contrasting states – purity and terror, material and spiritual, good and evil, light and dark.

James Kreiling, who specialised in this repertoire for his Doctorate, brings a rare level of insight and inspiration to his performances of Scriabin’s late music. Every nuance is understood and communicated with subtlety and sensuality, the kaleidoscope of Scriabin’s palette of colours drawn out in Kreiling’s outstanding interpretations. 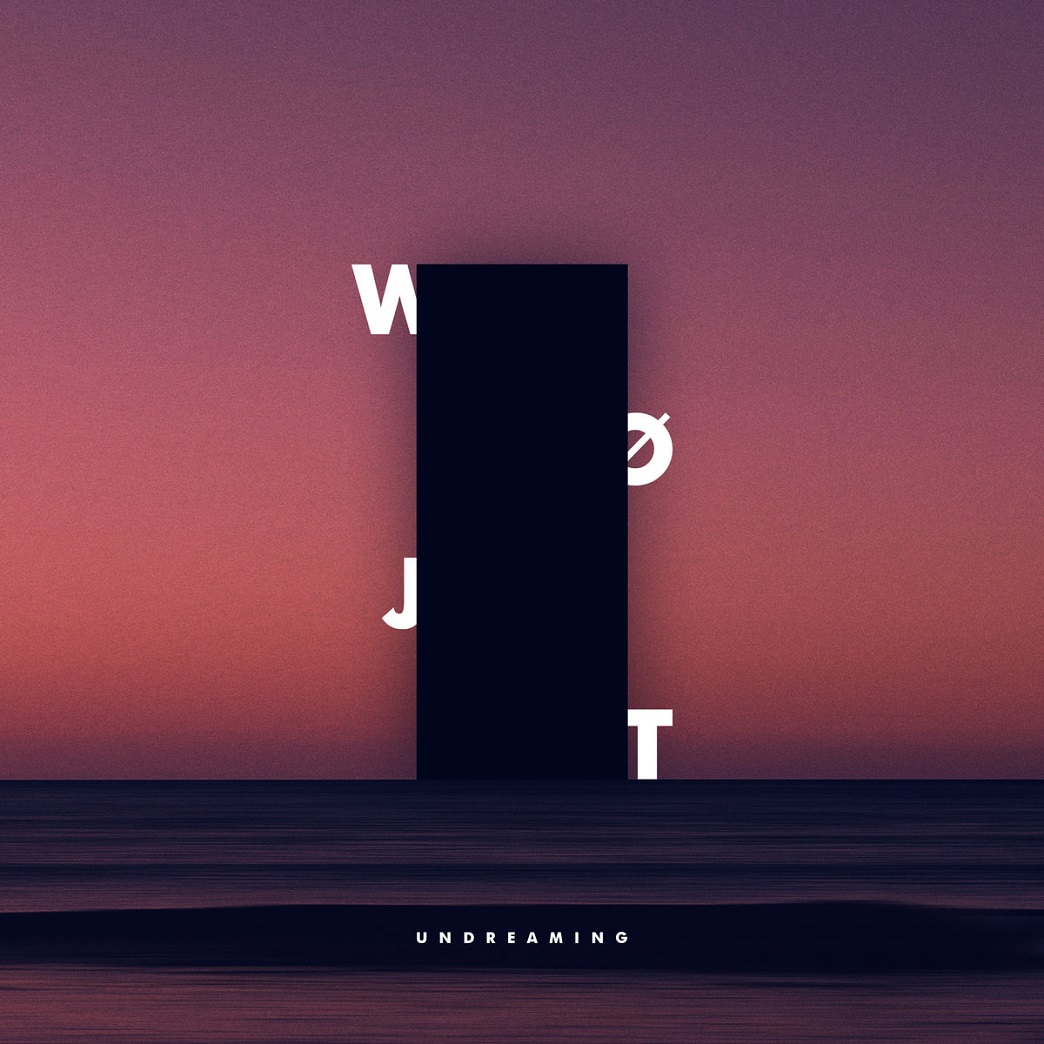 Another mind-boggling release from the small Swedish-Norwegian Bandcamp-based label Simlas produksjoner. This time we serve you six tracks from two old friends; oboist Jan Wiese and guitarist Tellef Øgrim. These Oslo based musicians first met in the jazz band Bitihorn in 1976.

The tracks the album were played live in studio April 19th and August 22nd 2018. Guitar, oboe, softsynths and effects were performed in real time and recorded directly to file in Ableton Live.

In the mix, some minutes of the original takes were cut and left out. Apart from stereo panning and some volume adjustments, nothing was added.

WØJT honours the many great programmers of software, builders of instruments, coffee growers, bakers, vegetable farmers, philosophers and art operators who have made Undreaming possible. 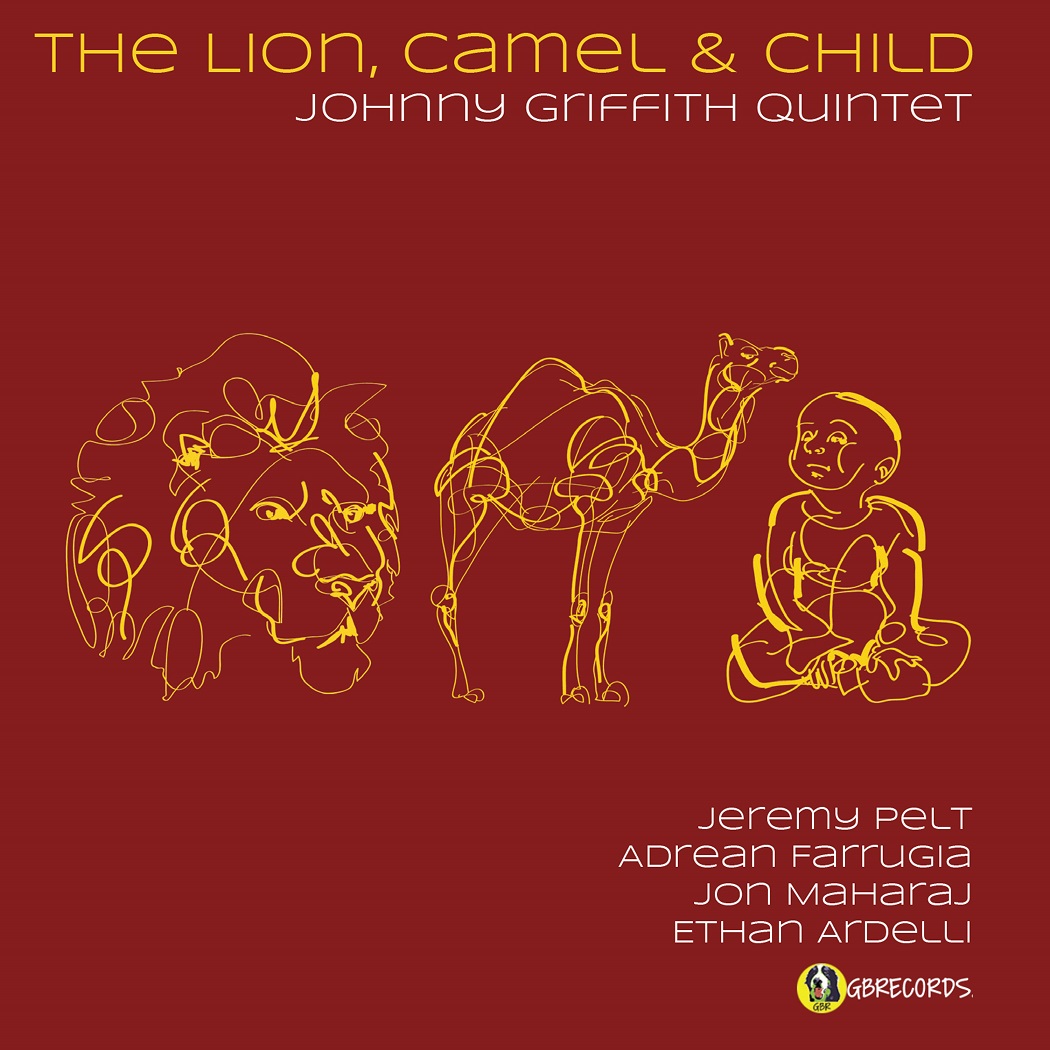 Wonderful new modern jazz album from Toronto saxophonist Johnny Griffith and his quintet, entitled The Lion, Camel & Child.  It's the second release from  Griffith’s all-star quintet - a band made up of of four of Toronto’s leading jazz lights, along with the legendary New York trumpeter Jeremy Pelt.

For this release, Griffith drew inspiration from the writings of Friedrich Nietzsche - speci cally his book Three Metamorphoses. As Griffith explains, “Metamorphoses is concerned with what propels each new phase of human growth, so it seemed fitting to frame this as a suite – each track individual unto itself, yet when listened to as a whole representing the arc of the personal struggle to know more and be more.”

Central to the album is the suite that illustrates these phases and the qualities that define them: The Lion, virtuous and rebelious; The Camel, courageous and dutiful; and The Child, playful and free of spirit. 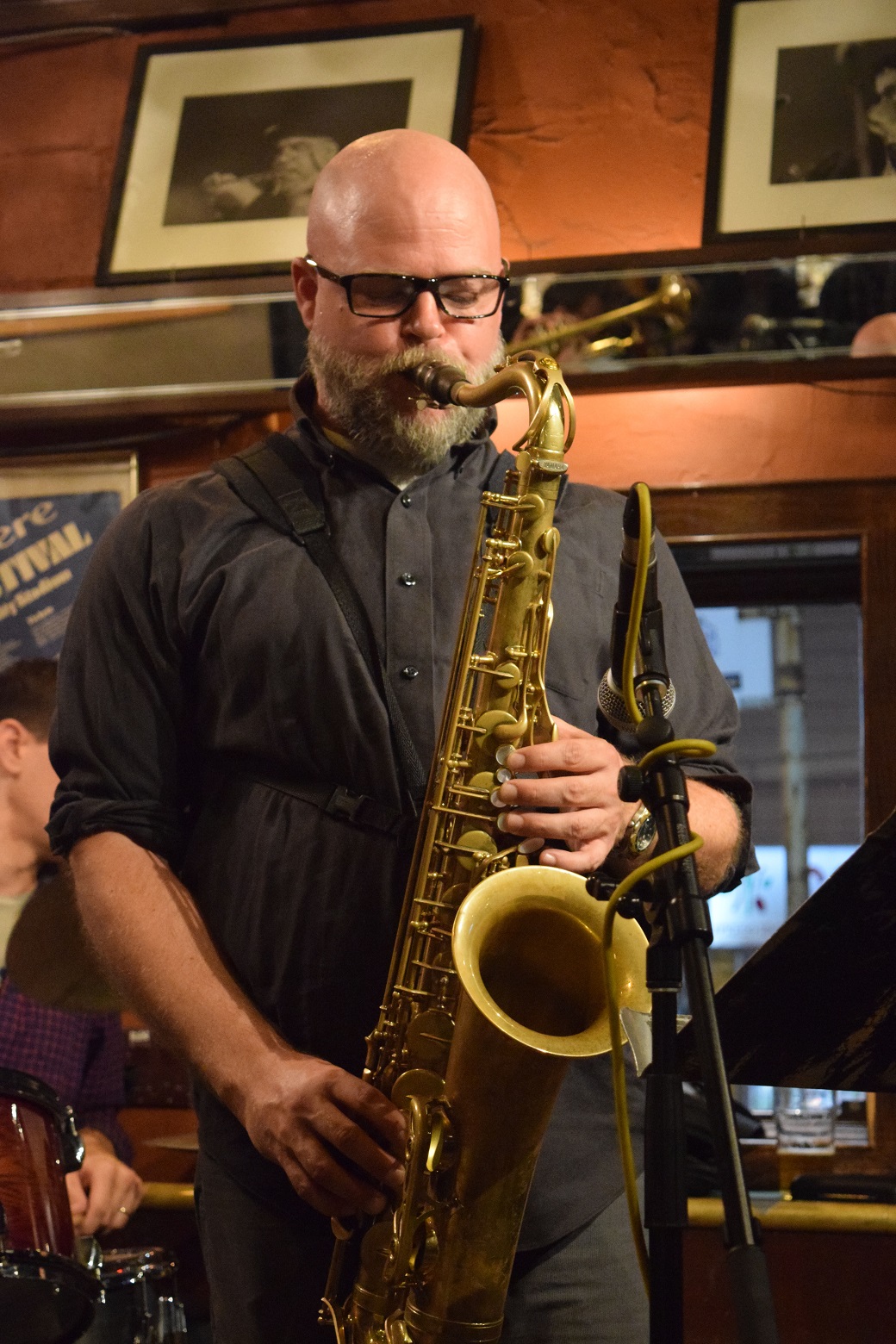 Johnny Griffith is a multi-Juno Award nominated saxophonist, composer and producer who has played and recorded with numerous artists including Don Thompson, Hawksley Workman, Jeremy Pelt, Charlie Hunter, The Wailers, Alex Dean, Laila Biali, Al Henderson Quintet, Brandi Disterheft and Terra Hazelton to name a few, and is a member of the popular Canadian funk/hip hop group, the Pocket Dwellers. He has toured extensively across Canada, the United States, and Europe performing at all the major Canadian music festivals as well as several international venues including the Montreaux Jazz Festival in Switzerland.

The Johnny Griffith Quintet is the artist’s first solo venture and launched with “Dance with the Lady” in 2015. Featuring NYC’s Jeremy Pelt on trumpet, the album was the featured release on WBGO Jazz radio New Jersey. Johnny continues with the soon to be released “The Lion, Camel and Child”, again with Pelt, previewing at the TD Toronto Jazz Festival 2018.


Johnny Griffith  will be releasing The Lion, Camel & Child on Friday, December 7th, 2018 on GB Records. 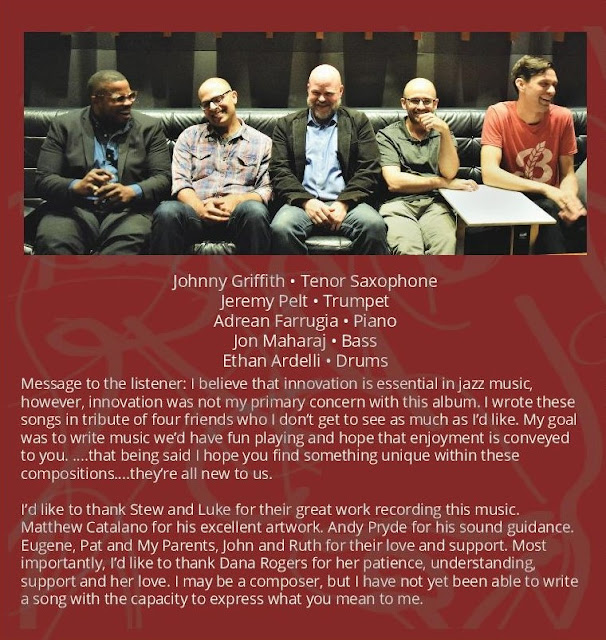 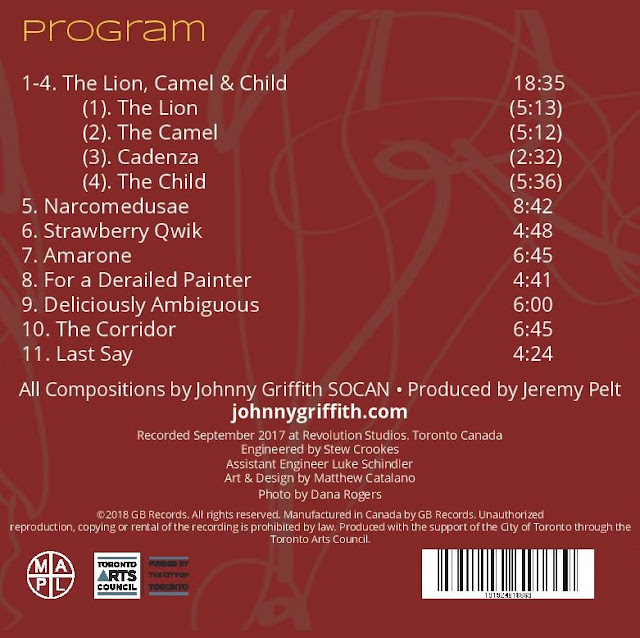 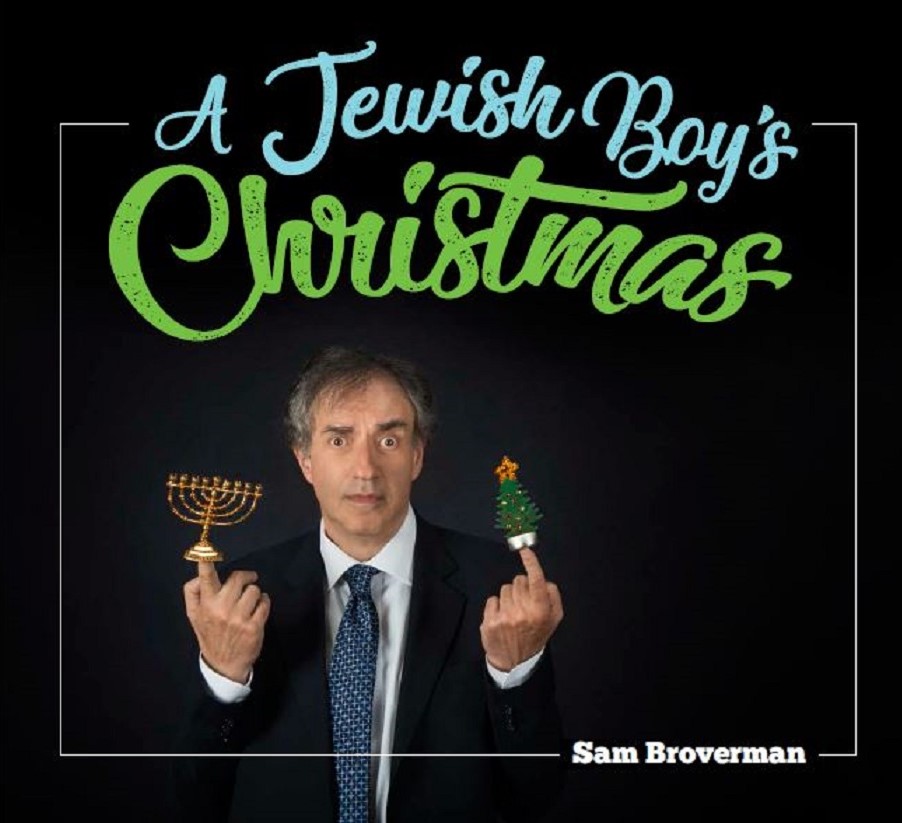 For almost ten years now, Winnipeg born, Toronto based singer Sam Broverman has been presenting his cabaret show A Jewish Boy’s Christmas every holiday season. Initially inspired by the fact that many of the best known Christmas songs were written by Jewish songwriters, the show has evolved into a well loved holiday revue driven by Sam’s love for comedy and novelty song. After almost ten years - and countless requests - it was time to record an album.

For A Jewish Boy’s Christmas - his fourth full length album - Sam enlisted the help of several of Toronto’s best musicians, including his working band with Peter Hill and Jordan O’Connor.  Featured as a guest soloist is Broverman’s regular special guest, Whitney Ross-Barris, the Toronto jazz and theatre scene stalwart whose wit is widely known. Ken Whitely - the multiple award-winning Canadian music legend- was invited onboard to produce the whole affair after his involvement in the inaugural show.

Having celebrated the work of great songwriters like Johnny Mercer and Jimmy Van Heusen on his previous recordings, it was time for Sam to return to one of his first loves: parody songwriting.  In addition to working as a singer, Sam is also a professor of actuarial mathematics at the University of Toronto - he put himself through school singing, and has delivered his book of math based parody songs at academic conferences for years.  A Jewish Boy’s Christmas is a hilarious and irreverent take on the holiday season.

Sam Broverman is a Winnipeg-born, Toronto based jazz singer and songwriter. He has performed in venues across Canada, the US, Europe  and Asia. He began his professional singing career in Winnipeg as a teenager, appearing in theatre and cabaret productions and also on the nationally televised shows "Hymn Sing" and "The Doug Crosley Show". Sam regularly performs in the Summer Entertainment Series at Winnipeg’s Lyric Theatre. Sam has PhD in mathematics from the University of Manitoba. He supported his studies by working as a professional singer throughout his university years. After graduating, he moved to Toronto, where he continues to be a professor of actuarial mathematics at U of Toronto, and continues singing.

Sam has sung with the Toronto Mendelssohn Choir for many years. In 2008 he recorded a five song EP, “Five Standards” and in the spring of 2011 he released his first full jazz album, “Dream Maker, Heartbreaker: Sam Broverman sings Johnny Mercer”. Sam's second jazz album, “Leftover Dreams”, was released in the fall of 2013. It is a collection of the songs of Sammy Cahn and Jimmy Van Heusen on the occasion of their 100th birthday year.  His most recent album is “Feelings of Affection”, released in 2016.

Sam performs regularly in jazz venues around Toronto, including the Home Smith Bar, Jazz Bistro, Lula Lounge, The Rex, 120 Diner, Hart House at the University of Toronto and The Reservoir Lounge. In 2012 Sam created the popular show “A Jewish Boy’s Christmas”, which he has performed to sold out audiences every December since. In 2013 he appeared on the TVO show The Agenda, hosted by Steve Paikin, where he talked about and sang songs of Johnny Mercer.

One of Sam's favorite activities is songwriting, particularly parody and novelty songs. He has had the opportunity to perform some of his math-related parody songs for several math research conferences. In the summer of 2015 he was the local organizer for a conference in actuarial mathematics attended by about 250 people. Sam wrote several parody songs for that conference and recorded a CD of eight songs that conference participants received. Sam has performed these songs at various math conferences.


Sam Broverman will be releasing A Jewish Boy's Christmas on Friday, November 30th, 2018. 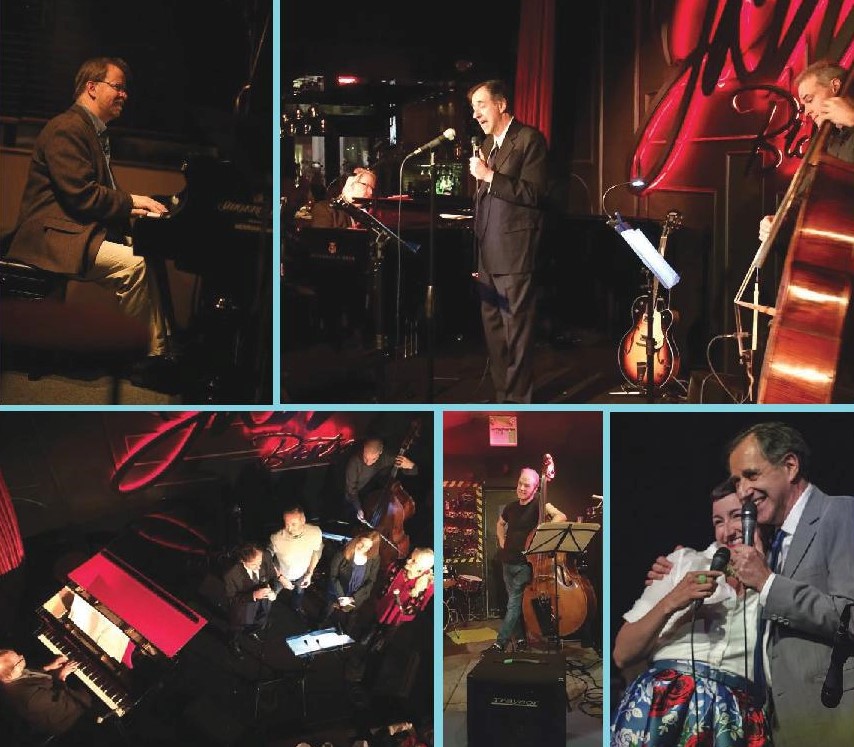 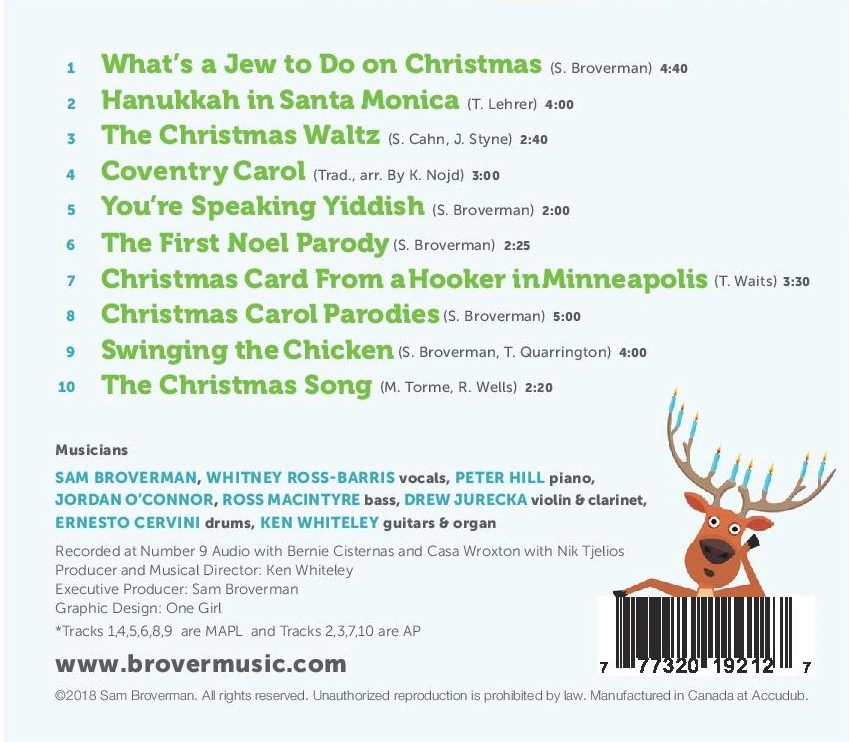 Posted by Republic of Jazz a la dirección 4:30 AM