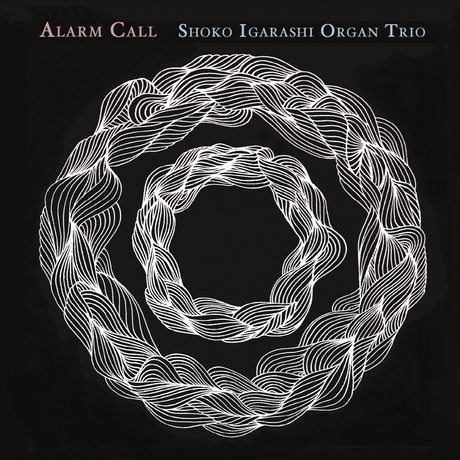 
Irresistibly smooth “Alarm Call” shows off the Shoko Igarashi Organ Trio’s impressive chops. From the nimble drumming of Kazuhiro Odagiri to the playful work of Takafumi Suenaga on organ, everything comes together. By far the heart and soul of the album pours out of Shoko Igarashi’s tenor saxophone. Remarkably expressive Shoko Igarashi’s work on the tenor saxophone is an absolute thrill. Throughout the album all three have ample space in which to display their ample talent whether it is showing off the drumming flourishes on “Afro Centric” or the gleaming organ work on the title track. Impeccable fidelity helps capture all of this as the songs feel so positively intimate.
On the aptly named “Tune One” things begin with crystal clarity. Shoko Igarashi’s saxophone effortlessly blends with the light brushes of the drum and the shimmering melodies that emanate from the organ. Going for a more mysterious and shadowy approach is the subdued work of “All of You”. Here the light night vibe works wonders as the mellowed groove guides the song along. Slowly but surely the entire band plays the song as if waking from a dream as the song becomes increasingly more active towards the end. With a languid tempo “Vanity” serves as the most introspective song in the album. Ending things on an ambitious note is the album highlight “Pons”. Right from the beginning the whole band comes together to create an sprawling immersive piece.
The Shoko Igarashi Organ Trio’s “Alarm Call” proves that modern jazz can be full of life and vigor. Joyful, elegant, and full of bright colors “Alarm Call” simply astounds. 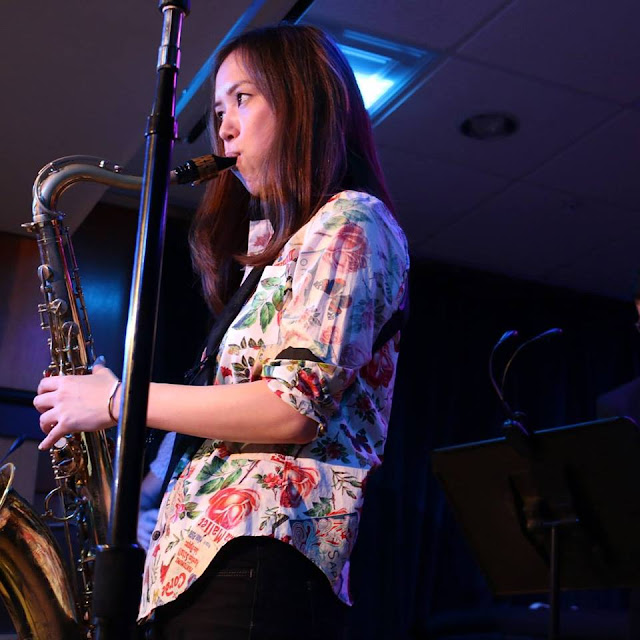 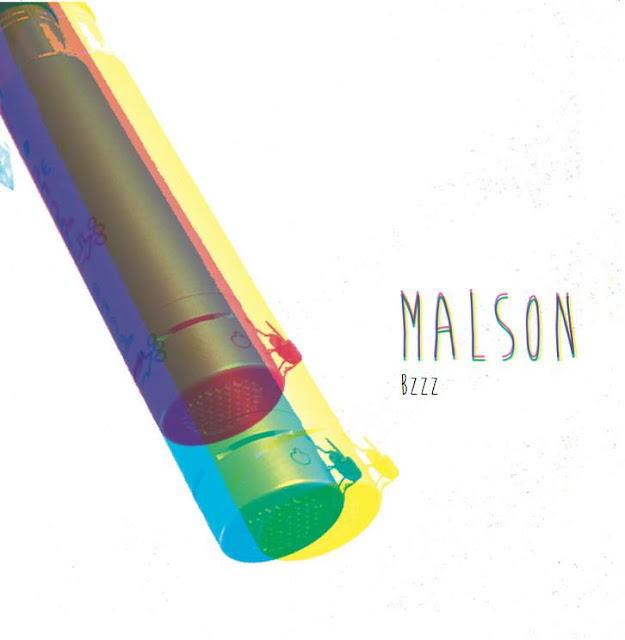 This story begins with a she-weasel saving and suckling three twin brothers abandoned at the edge
of a city in the South.
The four of them spoke different languages.
Very soon they developed a dialogue system based on deep, visceral sounds produced out of heavy,
rusty pipes and rhythms performed on high voltage wires and forsaken industrial silos.
“It is the daily rite of breaching the darkness of the routine with the shiniest of the blades:
creativity” said once the weasel during a press conference, in Portuguese, “it is the shaker of the
finest cocktails like dreams and nightmares”.
“Creativity” is the key-word to walk in and out the music of Malson, whose roots dig deep in a
hundred years of jazz history to provide sap to the new-colored, exploding buds.
With a symmetrical feeling of sound, two dark tenor saxophone voices melt in unison, interlace
melodies and state shapes of harmonic intervals, in the complete freedom allowed by the solid
sustain of the groovy, actively interacting doublebass&drums rhythm section.
It's a game for four players only, whose musical discourse constantly moves in space visiting from
fields of detailed composition to seas of freely improvised music. 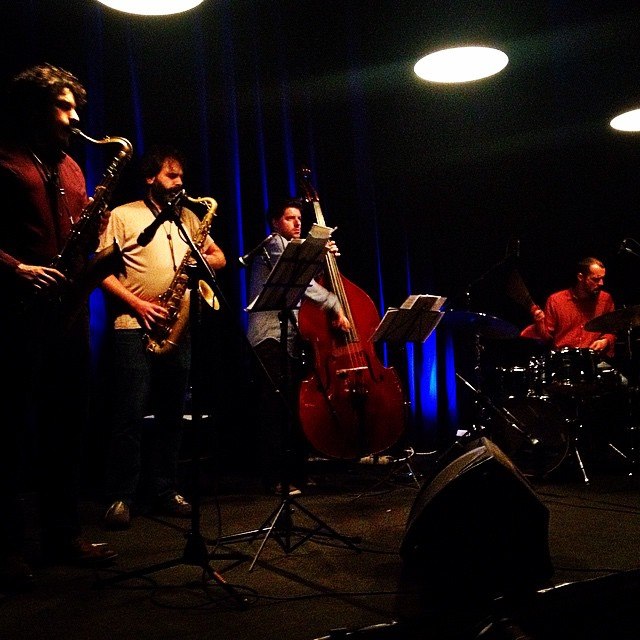 Posted by Djiani a la dirección 9:48 AM 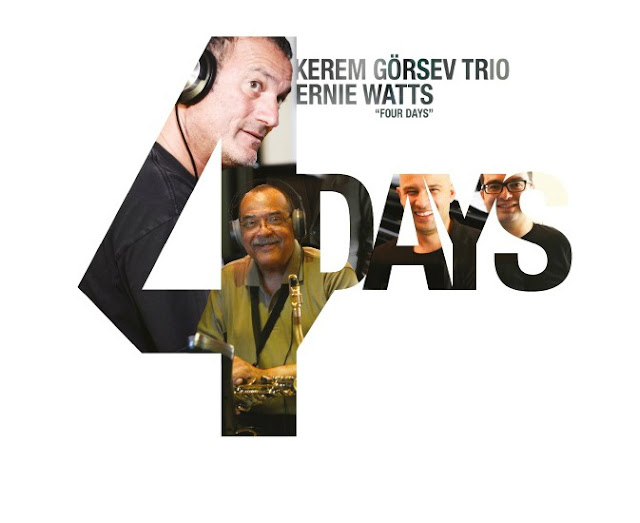 
All the tracks in this album are my originals composed between 1994 - 1997 and have been published in my previous albums in those years. In 2014, we have recorded “Emirgan” with Ernie Watts, Kağan Yıldız and Ferit Odman. Following the release of the album, in May 2015, we had a series of concerts and after the tour, we got into the studio and we recorded a new album, “Four Days” for these selected compositions with a new interpretation. 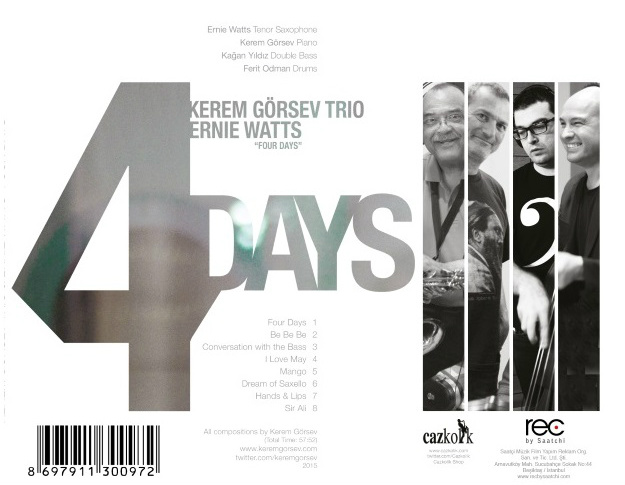 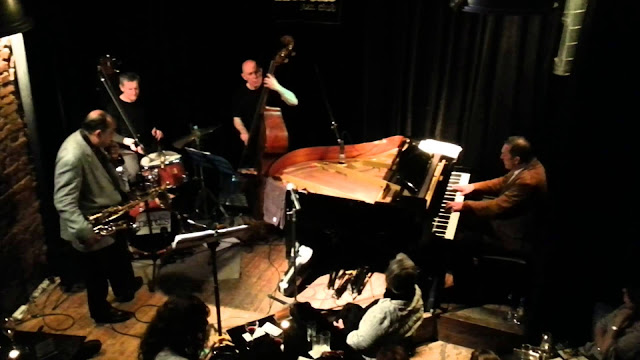 Posted by Djiani a la dirección 9:40 AM 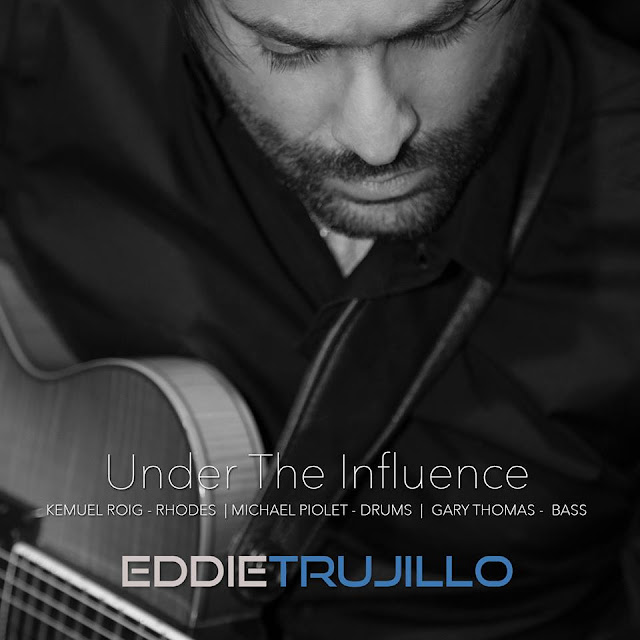 I thank God for the gift of music and for this great opportunity i had to record this album not only with friends but with talented musicians. Under The Influence was recorded live in Miami with Kemuel Roig on rhodes, Michael Piolet on drums, and Gary Thomas on bass. It is comprised of eight original songs written by myself and influenced by my love for jazz music. The songs are in many different jazz styles and feature outstanding performances by all musicians. Hope you enjoy this album as much as i enjoyed recording it. 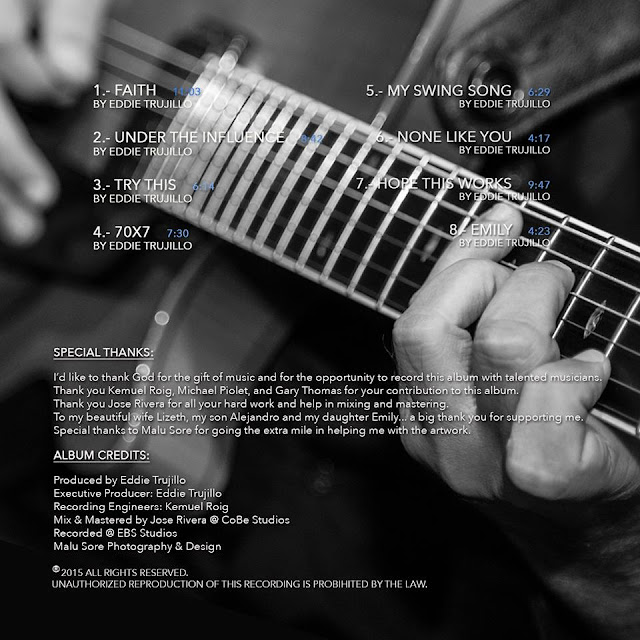 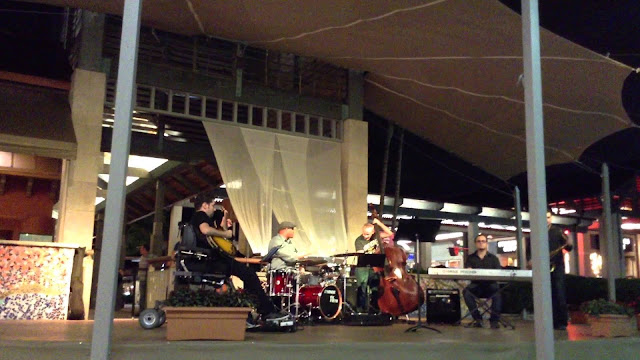 Posted by Djiani a la dirección 9:30 AM 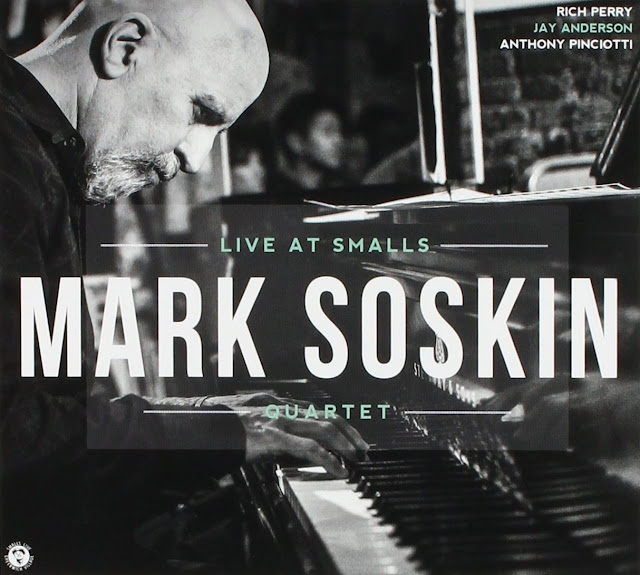 Pianist Mark Soskin's been making music for the past few decades, but emerges here with a wonderfully fresh sound in the setting of the Live At Smalls series – working in this open, unbridled way that seems to bring forth some of his best solos in years, and show off some wonderful group energy too! Mark balances between lyrical, introspective passages and some more dynamic flights on the piano – and works here with a combo that features Jay Anderson on bass and Anthony Pinciotti on drums, plus some bolder tenor from Rich Perry, whose presence really gives the album a deeper current of soul! The choice of material is compelling, too – tunes by Monk, Stanley Cowell, Wayne Shorter, and Miles Davis – often introduced by Soskin in this gentle way, then set fire by the rest of the group. Titles include "Lonely Town", "Cal Massey", "Blackberry Winter", "In A Silent Way", "Miyako", and "Think Of One". 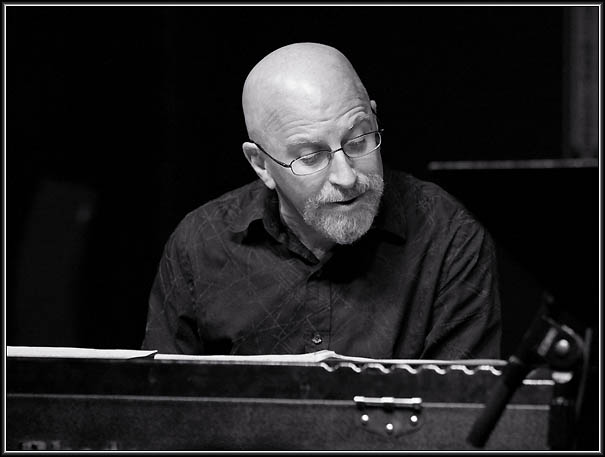 Posted by Djiani a la dirección 9:09 AM 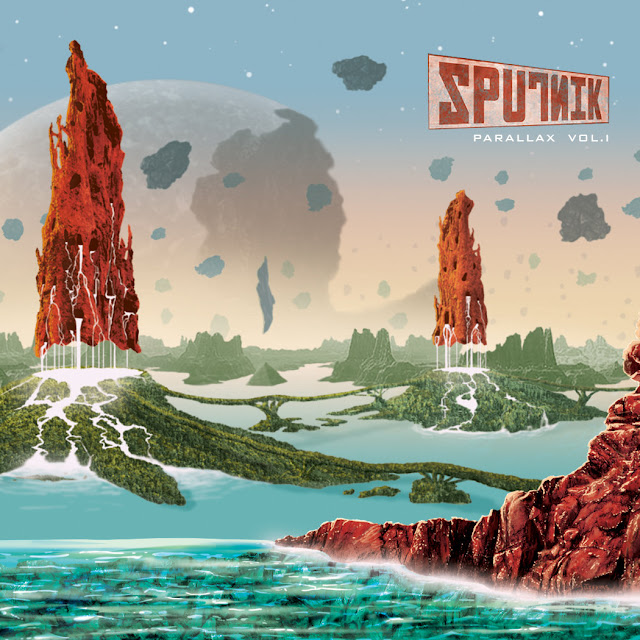 Sputnik is a fusion jazz project which brings the talents of Leigh Fischer (Bass), Doug Northcott (Drums), Barry G. Player (Guitar), and Tristan Rivers (Guitar) together to create sounds that, though often out of this world, are always highly inventive and very fun to listen to.

Upon the release of its debut album "Space Junk" in 2012 Sputnik would find a strong voice that borrows from the Jazz world but is rooted heavily in funk and fusion. The band takes songs such as Billy Cobham's Red Barron, or Herbie Hancock's Watermelon man and plays them with passion and intensity while remaining honest and paying homage to the originals. On the flip side they can also take tunes like Stratus, and The Theme from fletch and send them spinning into sonic cascades that will leaving you reeling for more.

The band is also focused on creating a repertoire of original pieces that really showcase the talent level of these Winnipeg artists. While creating music that creates a very pleasing aura for the audience is key, they clearly also strive to push themselves as players. As amazing to watch in a small club or bistro as on a large stage, Sputnik puts on a show that simply must be seen!

Sputnik's new album, Parallax Vol. I, is comprised of all original material and set to be released Jan 09, 2016. 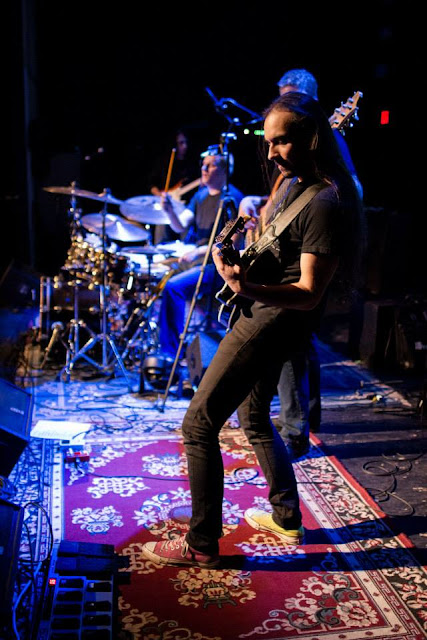 Posted by Djiani a la dirección 9:03 AM 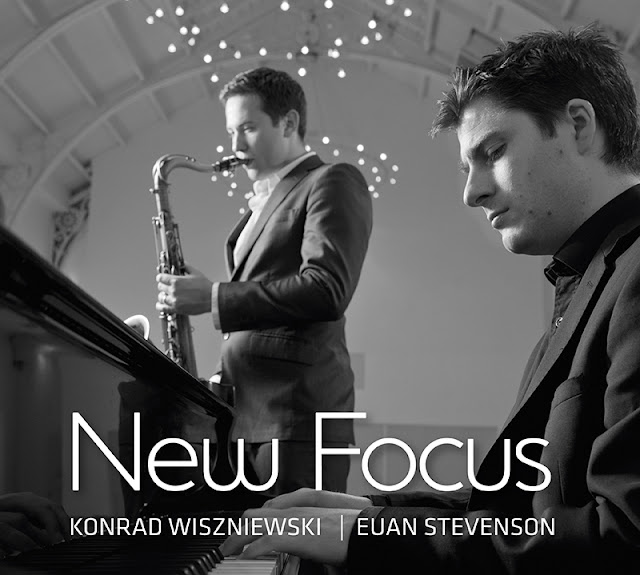 This nine-piece ensemble features The Glasgow String Quartet (comprising some of the finest virtuosos from The Royal Scottish National Orchestra, and Scotland's leading string quartet), alongside Stevenson on piano fronting the first call drum and bass team of Alyn Cosker (drums) and Michael Janisch (bass), Wiszniewski at the helm on saxophones and Alina Bzhezhinska on harp.

Stevenson's tight knit arrangements offer concise, pleasing trajectories, preserving the original sentiment of each composition, enriching them with ever changing soundscapes of strings and harp. Wiszniewski's tone tells parables of Polish ancestry while the arranger's own crystalline piano laments for pit closures in a northern mining town. A powerhouse rhythm team provides a counterfoil, never allowing the music to become sentimental.

This is music at its resourceful best; borrowing the harmonies and sonorities of the classical world, the tone poetry of Scottish Folk, the directness of pop and all mixed with the bustling edginess of jazz rhythms and improvisation. Duke Ellington famously quipped that there were only two categories of music - good and bad. New Focus most definitely belongs to the former.

"The most memorable concert of the 2011 Edinburgh International Jazz Festival. A real triumph." Jazzwise 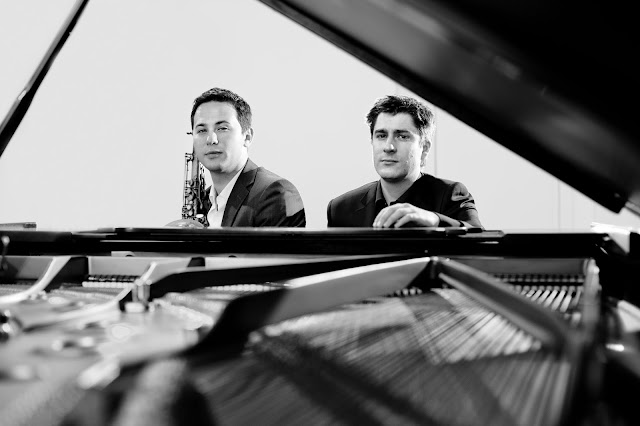 Posted by Djiani a la dirección 8:56 AM 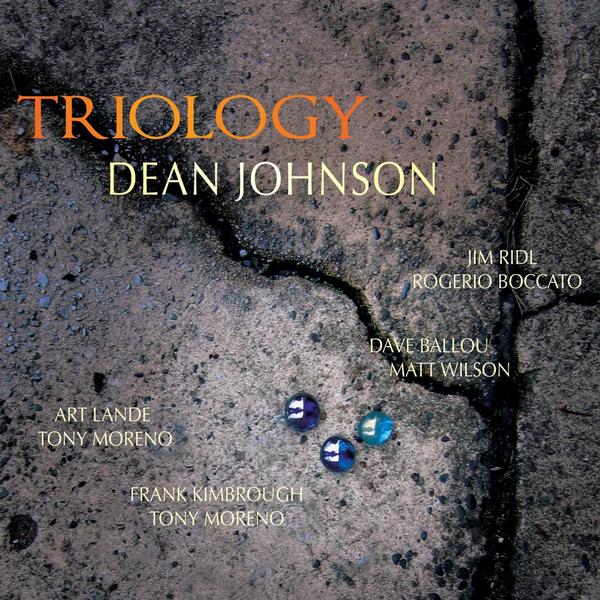 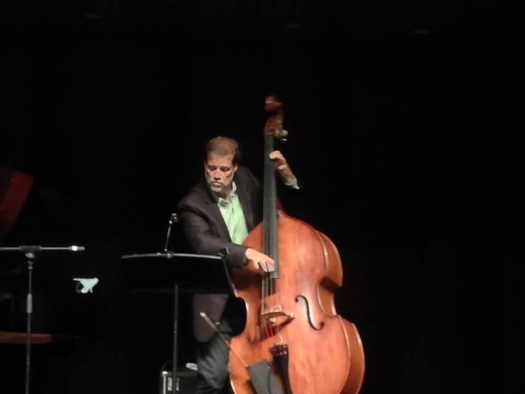 In the last few years Dean has performed with numerous groups including the New York Voices, and in special concerts with jazz artists Fred Hirsch, Jane Ira Bloom and Art Lande. He also performs regularly with pipa virtuoso Min Xioa-Fen and guitarist Steve Salerno in the Blue Pipa Trio, performing their eclectic combination of jazz, bluegrass and Chinese folk songs. As bassist for vocalist Roseanna Vitro, Dean has performed as a U.S. Jazz Ambassador in the Balkans, Kazahkstan and Kyrgystan, as well as a live recording at the Kennedy Center featuring pianist Kenny Werner, and a recording project celebrating the music of Randy Newman featuring Mark Soskin. He has performed, recorded and toured for over six years with vibraphonist Mark Sherman and a quartet including drummer Tim Horner and pianist Allen Farnham. Dean performed over the last eleven years with vocalist Kendra Shank along with pianist Frank Kimbrough and drummer Tony Moreno. Dean has an ongoing collaborative relationship with saxophonists Bob Kindred & Hayes Greenfield, guitarists Jay Azzolina & Bruce Arnold.

Born in Seattle, Washington, in 1956, Dean studied Bass Violin with a number of bassists, including the renowned Gary Peacock. Dean also studied piano and composition at the Cornish Institute, in Seattle, with James Knapp and from 1974 to 1976, attended the Berklee College of Music, in Boston, studying with bassists Rich Appleman, John Neves, and studying theory, composition, and arranging with John LaPorta and Herb Pomeroy.

Gerry Mulligan however is Dean's most prominent association. Dean spent over 10 years with Mr. Mulligan until his passing in 1996 in a variety of musical situations including the Quartet, Nonet, Big Band, and with symphony orchestras, including the Israel Philharmonic, New York Philharmonic and the Cincinnati Symphony Orchestra. Dean performed in these Mulligan ensembles in concerts and jazz festivals all over the world as well as numerous recordings along with a number of well-known pianists that were in the group over that time including Harold Danko, Bill Mays, Bill Charlap, and Ted Rosenthal.

Dean has also taught privately for years and has conducted clinics at the Berklee College of Music, New York University, New Mexico State University, University of Northern Colorado, Ithaca College, and at the Rotterdam Conservatory of Music. 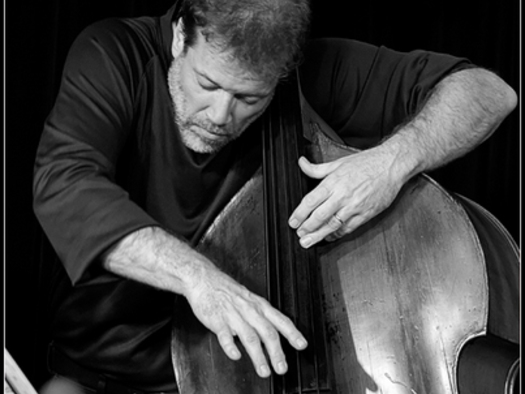