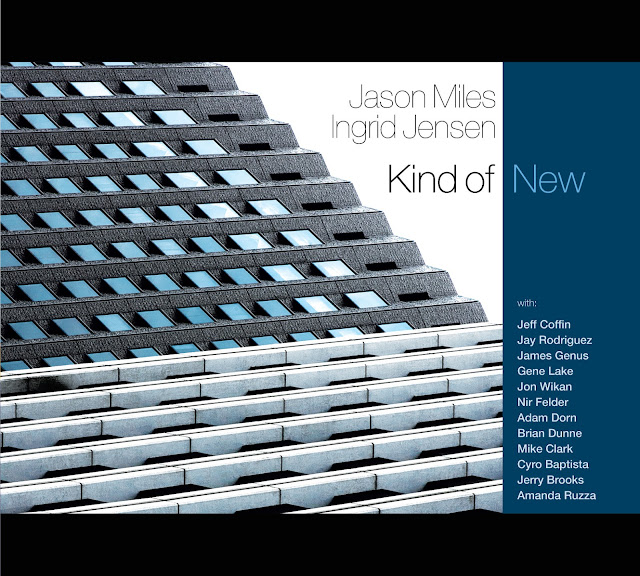 It’s one thing to make a Miles Davis tribute album; lots of good musicians have done this. It’s quite another to pay homage to Miles by exploring his most mysterious, impenetrable period — the classic fusion era of the early 70s — and create entirely new compositions inspired by this period.

Jason Miles has successfully done this…twice, now. While such a concept has been attempted before — the Wadada Leo Smith/Henry Kaiser venture Yo Miles! comes most immediately to mind — the award-winning producer, keyboardist, arranger and composer Miles approaches this task not by aping his old friend whose first name matches Jason’s last one, but bottling his aura and pouring it out on contemporary grooves. 2005’s start-studded Miles to Miles: In the Spirit of Miles Davis was just that.

Similarly, that’s why Kind Of New (out now by Whaling City Sound Records) is more than just a play on words with Davis’ best known masterwork; it, too, is fundamentally different from the Yo Miles! records in that it doesn’t strive to “go retro” in the sonic sense. At the same time, New is positioned much closer to those Bitches Brew and A Tribute To Jack Johnson opuses than Miles to Miles and that is due in large part to adding a key partner for this project: Canadian-born trumpet player Ingrid Jensen. Berklee product Jensen has made her mark since the 90s primarily as a post-bop trumpet and flugelhorn specialist but before all that she was jamming to Bitches Brew. The Kind Of New provided her an opportunity to go all in returning to one of her earliest influences.

So yes, Jensen plays the crucial “Miles Davis” role in this endeavor, but that doesn’t mean she plays her trumpet just like Davis. Adopting the Prince of Darkness’ moody sense of melodicism, she plays mostly contemplative, which makes the occasional outburst of notes more impactful. On “The Faction of Cool,” she responds to the cool, easy strut but allowing the melody come to her and maneuvers pretty easily around a rhythm section constructed by Amanda Ruzza’s fat bass line and a crisp snare stroll by Jensen’s husband Jon Wikan.

Nearly every song in this collection, in fact, has some variation of a cocky strut to it and a woodwind foil (usually provided by Jay Rodriguez), but beyond these strong Davis signifiers, Jason Miles and Ingrid Jensen rely on their own instincts. Thus, if they wanted a baritone sax to counter Jensen’s lines as they did in the chugging, uptempo funk of “Super City,” what does it matter that Davis preferred tenor and soprano sax foils? It works, and works great. 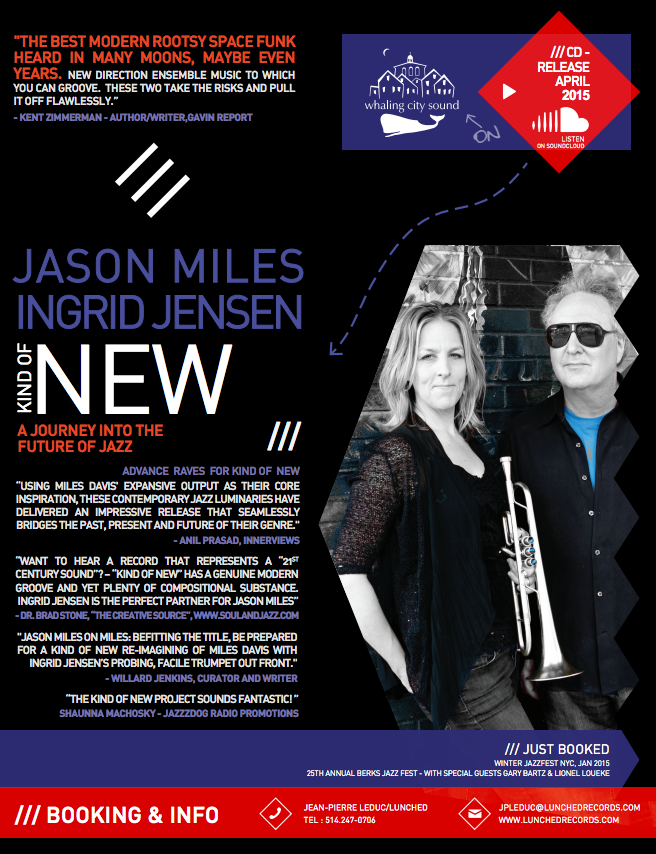 “Shirley,” named after favored Davis vocalist Shirley Horn, slows down the groove for a moment for this fetching ballad that actually would have been a nice fit inside of Tutu or Amandla, two Davis albums Jason Miles was involved with. Each of Jensen’s notes seem to hover a bit before dissolving, phrasing herself like a veteran singing. “Seeing Through The Rain” is another strain rendered delicately by Miles’ flowing electric piano with a soprano sax counterpart this time, from Jeff Coffin, and a mildly African vibe.

“Close To The Action” is a harder, jungle groove that finds Jensen conversing with tenor sax, soprano sax and bass clarinet all coming from Jay Rodriguez. “Kats Eye” is a Sly and Robbie type Afro-Caribbean groove that features Jensen’s sensitive muted trumpet skills.

Three live tracks were sprinkled throughout this mostly studio creation, which didn’t disturb the vibe of the album at all, revealing that the years Miles and Jensen spent trying out material on the bandstand before committing them to tape paid off with crisp, consistent performances no matter the setting. “Ferrari,” a tune Miles co-wrote with Michael Brecker, actually leads off the Miles to Miles album but this rendition is rawer (in a good way) as Miles’ dirty Rhodes conjures up Jarrett’s boss Cellar Door Sessions performances from 1970. “Street Vibe” is tough, rubbery bass-driven funk fueled by a James Brown break beat. And then there’s (officially) the one Miles Davis cover: a sublime reading of “Sanctuary,” that captures the free spirit of the original Bitches Brew track perfectly, especially the splotches of color Miles adds with his electric piano. Following that after some silence is an Easter egg, a concert performance of “Jean-Pierre.”

With fusion jazz having strayed so far from the roots laid down by Miles Davis, a record like Kind of New is a refreshing reconnect with the innovations he introduced some forty-five years ago. Jason Miles and Ingrid Jensen show us the genius of Davis with pointed musicianship but also didn’t leave out Davis’ most critical ingredient: his attitude. 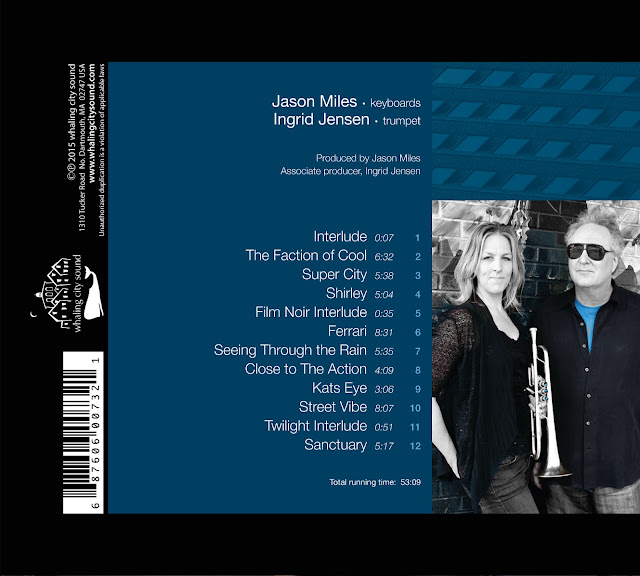 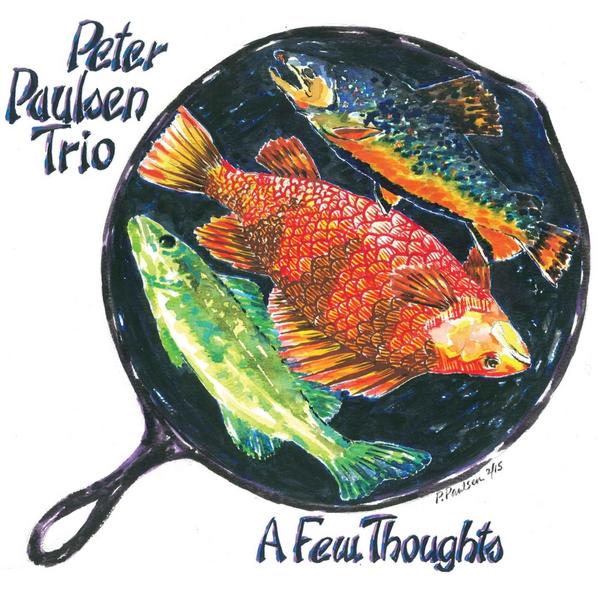 1. Time Remembered 5:18 Bill Evans arr. Peter Paulsen
supported bass solo 2 min supported drum solo
is an intriguing and challenging piece in a few ways. It is a 26-bar form
(16+10) expanded by opening up the last two bars of Cm9 to function as an
interlude between choruses. The melodic line covers a range of not quite two
octaves consisting of a beautiful balanced combination of diatonic scale
passages, arpeggios and larger intervals of a 5th and maj.7th reminiscent of a
modern classical art song melody. The harmonic progression is made up of
predominantly m9 chords contrasted with five maj.7th#11 chords used for one
bar each.

2. Slow Poke 8:17 Peter Paulsen
was inspired by a staunchly independent but selfishly inflexible 76 year-old
man driving his 1964 Chevy Impala in no hurry to get where he is going.
Originally written for solo piano, I’ve done both a septet arrangement (3 horns,
guitar and rhythm section), as well as this trio version.

3. So In Love 5:54 Cole Porter arr. Peter Paulsen
supported bass solo
is a beautiful and provocatively emotional Cole Porter ballad with an
unusually long AABA form…arranged in a mixed meter with an insistent
bass/left hand piano counter-melody, beginning with two funky waltz A sections
using strategically placed 4/4 measures, eventually leading into a 4/4 straighteighth
B section, returning to the funky waltz A section, then ending in a 5/4
interlude before the solo section.

4. Beneath a Weeping Willow’s Shade 8:36 Francis Hopkinson arr. Peter Paulsen
Francis Hopkinson, U.S. Statesman and signer of the Declaration of
Independence, as well as organist at Christ Church, Philadelphia, composed this
third of eight songs for voice and harpsichord in 1788, dedicated to George
Washington. This arrangement converts the original 6/8 meter to a jazz waltz
and I re-harmonized the original G major to a mix of E minor/G major, making
use of slash chords, polychords and altered chords throughout.

5. Waltz for Dave 6:58 Chick Corea arr. Peter Paulsen
is Chick Corea’s dedication to Dave Brubeck…I’ve always been intrigued
by the unusual intervallic quality of the melodic line in relationship to the
uniquely challenging, and at times very chromatic chord progression over an
“epic” 64-bar AABC form! We experimented in the studio with a number of
approaches to how we would solo over such a long form and settled on this
interactively loose improvised trading scheme.

6. Comrade Conrad 4:49 Bill Evans arr. Peter Paulsen
Maracas tap dance bright fun up maracas solo near end
became a regular part of my practice routine for about 6 months before this
session in order to fully absorb the two octave melody, 32-bar form and
frequently modulating harmonic progression, but without intentions of recording
this Bill Evans’ composition. When Francois agreed to join the trio on
percussion I wanted to feature his extraordinary maraca playing and
immediately thought of this piece as a vehicle. The resulting approach of 16-bar
latin/samba contrasted with 16-bar 9/8 is an especially intimate trio interaction
that was a joy to play!

7. Third Time 5:28 Peter Paulsen
was first composed for a larger ensemble of two horns and rhythm section,
including a countermelody in the second horn that is not present in this trio
version.

All compositions by Peter Paulsen SquarePegWorks BMI
Except Tracks 1, 3, 4, 5, 6 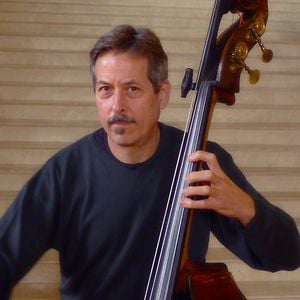 Peter Paulsen is currently Instructor of Double Bass/Jazz Studies at West Chester University and is an active member of the Harrisburg Symphony Orchestra, principal bass of the Allentown Symphony Orchestra and has been principal bass with the Spoleto Festival Orchestra in Spoleto, Italy. He is also busy as a free-lance jazz bassist in the tri-state area and performs regularly with his own quintet and trio as well as many of Philadelphia’s top jazz performers. Mr. Paulsen is very committed to the education of young, up-coming musicians and has participated in master classes with Francois Rabbath, Hal Robinson, Mark Morton, Donald Palma and as a clinician with Jimmy Knepper, George Young, Clark Terry, Dennis DiBlasio, Valery Ponamerov, Ed Soph and Gunnar Mossblad.

He is a member of the International Society of Bassists and an active composer of works for his instrument, receiving two prestigious Pennsylvania Council on the Arts composition grants and a residency at the Banff Centre for the Arts in Alberta, Canada. He has released his first CD as a leader on R&L Records, “Three-Stranded Cord”, for jazz quintet, receiving national airplay and high reports on Jazzweek and CJM(college radio) charts. As a member of the MPH Trio, with Gunnar Mossblad on saxophones and Chris Hanning on percussion, he has released “Curves” on GPCrecordings which is also getting national airplay and reviews. Peter can be heard on the 2005 Wahbo Records release, “Useful Music” by the Jeff Baumeister Quartet and Mr. Paulsen’s CD release on Wahbo Records, “Tri-cycle”, for jazz trio featuring compositions that won him a third PCA composition grant. His recent activity as a composer was recognized by the PEW Charitable Trust as a recipient of the PEW Fellowship in Music Composition for 2007 and has led to the most recent CD release, Peter Paulsen “Change of Scenery” Sextet, also on Wahbo Records.

“My background as a visual arts student has given me a significant sense of the value of observation, and the challenge of developing that which is observed into a vital and expressive statement. In jazz, this manifests itself through improvising with the spontaneity and interaction of a conversation; while in composing; it has more to do with framing an idea (seed) into a rhythmic, lyric and harmonic ‘personality’. The expression of this process can best be illustrated by the parable of the mustard seed; ‘The kingdom of heaven is like a mustard seed…, which indeed is the least of all the seeds; but when it is grown it is greater than the herbs and becomes a tree…’” Matt. 13: 31-32
Peter Paulsen, bassist/composer/arranger/educater has put together a new quintet specifically for a series of new compositions he has been working on since recently receiving a PEW Fellowship in Music Composition. While this band, at first glance, might be considered a jazz quintet, there are many other influences at play here in the compositions and interpretation that mix elements of classical composition with interactive improvisation; folk song with art song; as well as an ensemble dynamic that continues to develop and evolve with each performance. 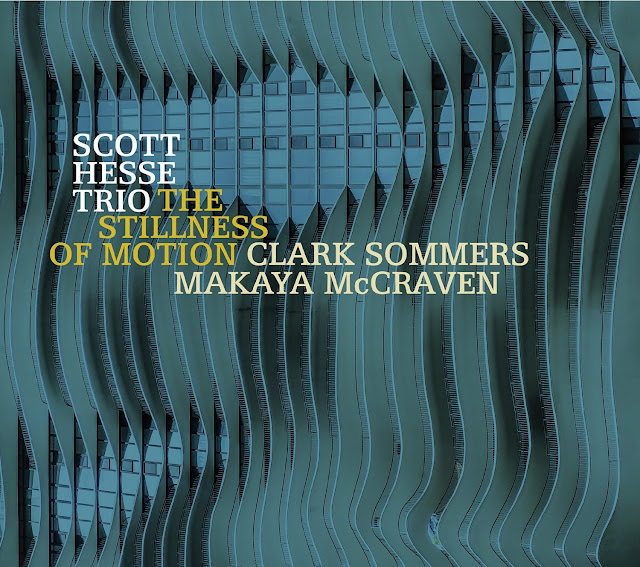 The Stillness of Motion brings together a riveting trio of Chicago's finest for a wide-ranging set of originals by guitarist Scott Hesse. Along with bandmates Clark Sommers on bass and drummer Makaya McCraven, they use this intimate setting to weave their highly individual voices together in a rich tapestry of group improvisation and composition. 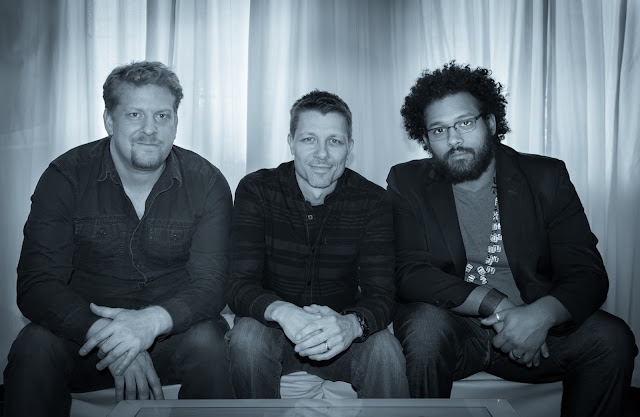