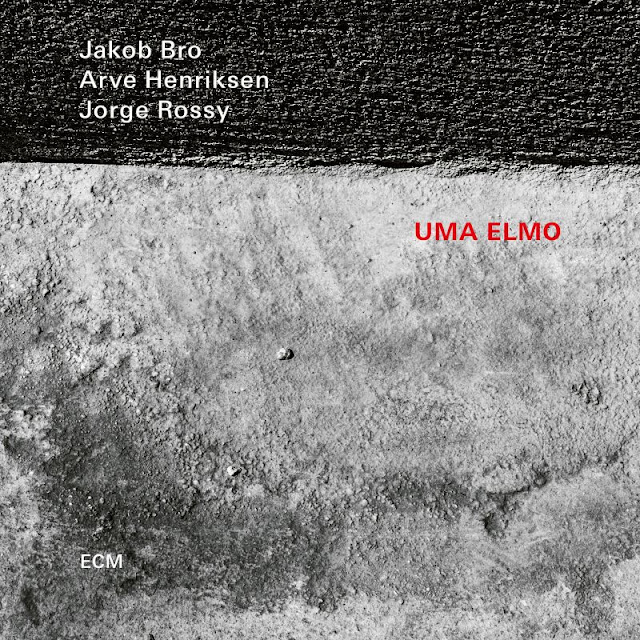 With Uma Elmo, his fifth album as a leader for ECM, Danish guitarist Jakob Bro presents a new trio featuring Norwegian trumpeter Arve Henriksen and Spanish drummer Jorge Rossy. Astonishingly, given the trio’s musical synergy, the first time these three musicians ever performed together was for the album’s sessions at the Swiss Radio studio in Lugano, with ECM founder Manfred Eicher producing. Uma Elmo reaffirms the observation about Bro’s work by London Jazz News that “there is no hurry to this music, but there is great depth.” Among the album’s highlights is opener “Reconstructing a Dream,” a darkly lyrical reverie. “To Stanko” is Bro’s hushed tribute to the late, great Polish trumpeter Tomasz Stanko, who featured the guitarist in his quintet for the ECM album Dark Eyes. Another homage to a late elder is “Music for Black Pigeons,” which was given its evocative title by saxophone sage Lee Konitz. Listeners will recognize Henriksen’s whispering, poetic sound from his 2008 ECM album Cartography, as well as his collaborations for the label with Trio Mediaeval and Tigran Hamasyan. Rossy is well known to jazz fans on both sides of the Atlantic, particularly for his decade-plus tenure in Brad Mehldau’s career-making first trio. As for the leader, DownBeat aptly noted in its review of his previous ECM album, Bay of Rainbows, that “Bro’s guitar is luminous… his music both hypnotic and dramatic.” 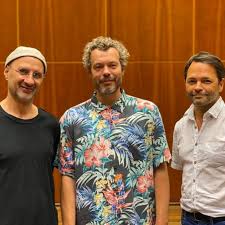 Pre-order
Posted by Republic of Jazz a la dirección 12:08 AM 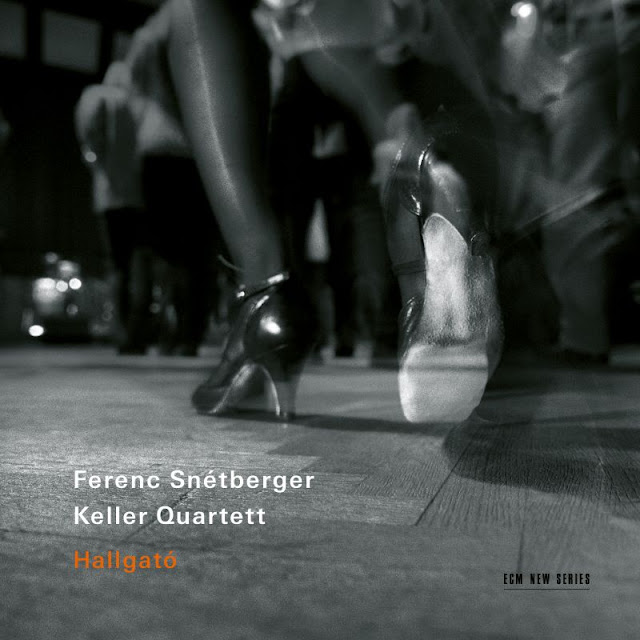 On Hallgató, recorded live in the Grand Hall of Budapest’s Liszt Academy, Ferenc Snétberger and the Keller Quartett, respectively Hungary’s outstanding acoustic guitarist and its foremost string quartet, are heard together and separately in a moving and organically unfolding programme, with compositions by Snétberger, Shostakovich, John Dowland and Samuel Barber. Snétberger’s “In Memory of My People”, dedicated to his Sinti and Roma forebears, is a powerful and spirited piece, both threnody and celebration. Shostakovich’s 8th String Quartet, also dedicated to the victims of war, is played with great sensitivity and feeling by the Keller musicians. Subtle arrangements of John Dowland find Snétberger with the Keller Quartett for “I saw my lady weep” and in duo with cellist László Fenyö for “Flow, my tears”. The Keller Quartett address the yearning quality of Barber’s Molto adagio from his String Quartet op.11, and Snétberger offers a glimmer of hope with the tender solo guitar piece “Your Smile”. The concluding “Rhapsody 1”,with Snetberger and string quintet, is a new arrangement of a radiant theme originally written by Ferenc for a film project about the Roma. In total: a very involving and gripping album. Recorded in December 2018, and produced by Manfred Eicher.

Pre-order
Posted by Republic of Jazz a la dirección 12:07 AM 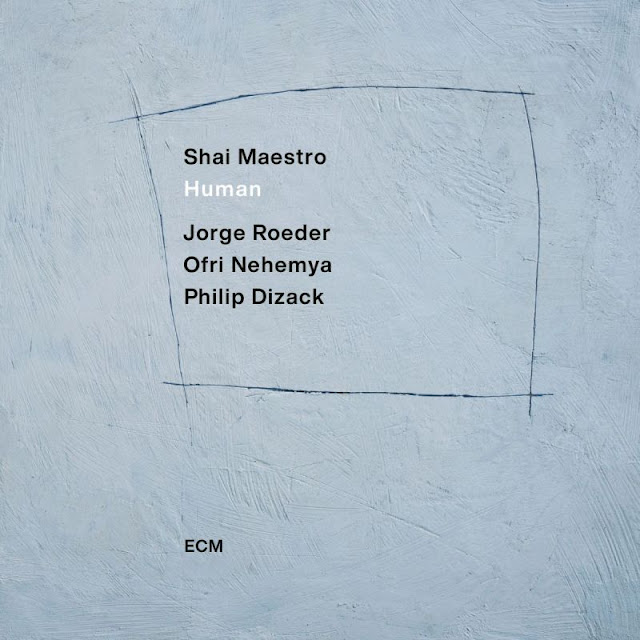 In its review of pianist Shai Maestro’s ECM leader debut The Dream Thief, All About Jazz spoke of “a searching lyrical atmosphere, emotional eloquence and communal virtuosity that serves the music.” All of which also applies to Human, where Maestro’s outgoing, highly-communicative band with fellow Israeli Ofri Nehemya on drums and Peruvian bassist Jorge Roeder becomes a quartet with the inspired addition of US trumpeter Philip Dizack. Shai’s expansive pianism is well-matched by Dizack’s alert, quick-thinking approach to improvising. And, as ever, Maestro is taking the music forward while also respecting its sense of tradition. Near the end of a programme comprised almost entirely of Maestro originals, exploring a range of temperaments, the quartet offers its own take on Duke Ellington’s “In A Sentimental Mood”, while Shai’s tune “Hank and Charlie” pays tribute to the musical empathy shared by the late Hank Jones and Charlie Haden. Human was recorded at Studios la Buissonne in the South of France in February 2020, and produced by Manfred Eicher.

Pre-order
Posted by Republic of Jazz a la dirección 12:06 AM The debut album of Joe Lovano’s Trio Tapestry was one of 2019’s most talked-about releases. The trio’s musical concept – the Boston Globe spoke of “utterances of hushed assurance, lyricism and suspense” - is taken to the next level on its second album, Garden of Expression, a recording distinguished by its intense focus. Lovano, a saxophonist whose reach extends across the history of modern jazz and beyond, plays with exceptional sensitivity in Trio Tapestry. And the music he writes for this group - tenderly melodic or declamatory, harmonically open, rhythmically free, and spiritually involving - encourages subtle and differentiated responses from his creative partners. Joe describes their interaction as “magical”. Carmen Castaldi’s space-conscious approach to drumming further refines an improvisational understanding that he and Lovano have shared since the 1970s. The trio is also a wonderful context for Marilyn Crispell’s solos, counter melodies, and improvisational embellishments, and her feeling for sound-colour helps the chamber music character of the group to flower. The details of the music are beautifully realized in this recording made in the highly responsive acoustics of the Auditorio Stelio Molo RSI in Lugano and produced by Manfred Eicher. 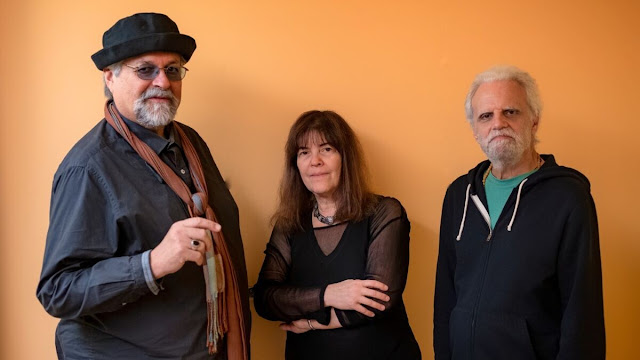 Pre-order
Posted by Republic of Jazz a la dirección 12:05 AM 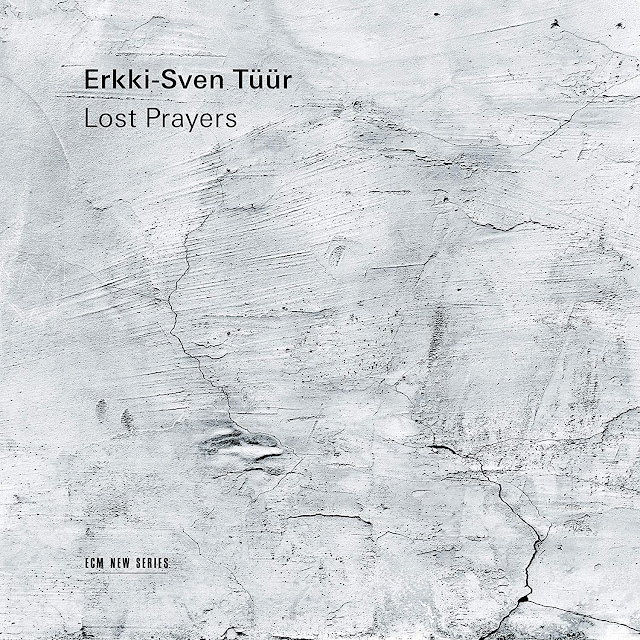 Lost Prayers is the first of Estonian composer Erkki-Sven Tüür’s New Series recordings to be devoted entirely to his chamber music. Scaled-back instrumental forces, however, are no indicator of reduced expressive power, and the volatility of Tüür’s “vectorial” concept emerges forcefully from the first seconds of Fata Morgana which is, with Lichttürme, one of two pieces for violin, violoncello and piano. These pieces are performed by the Estonian trio of Harry Traksmann, Leho Karin and Marrit Gerretz-Traksmann, all of whom have played Tüür’s music extensively and appeared on earlier ECM discs, including Crystallisatio and Oxymoron. The German-based Signum Quartett plays Tüür’s Second String Quartet, Lost Prayers, and Signum violinist Florian Donderer also performs Synergie together with cellist Tanja Tetzlaff. Collectively the musicians underline Erkki-Sven Tüür’s view that “one can build up a really rich and wide palette of sounds with only three or four instruments. You don’t necessarily need a full orchestra to operate with a powerful soundscape. The album was recorded at Bremen’s Sendesaal in April 2019.

Pre-order
Posted by Republic of Jazz a la dirección 12:04 AM 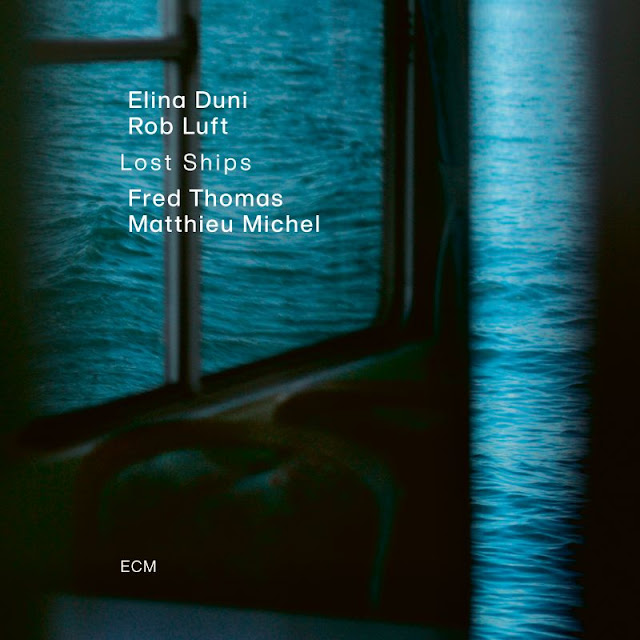 Elina Duni and Rob Luft’s programme of songs of love and exile has been gathering momentum since 2017, when the Albanian-Swiss singer and the British guitarist began their collaboration. Along the way the duo has been augmented by distinguished guests, with Swiss flugelhornist Matthieu Michel and UK pianist/percussionist Fred Thomas here making significant contributions to the overarching concept. The migration crisis, a theme explored on Elina’s Partir album, is again a central issue, so too ecological concerns. Material is drawn from many sources: “There are songs that touch upon past influences, with the sound of Albania and Mediterranean folklore ever-present. We wanted to explore other musical roots, too: timeless jazz ballads, French chanson, American folk song…” The broad range of music addressed runs from traditional pieces to original compositions, via songs made famous by Frank Sinatra and Charles Aznavour. Lost Ships was recorded at Studios la Buissonne in the South of France in February 2020. 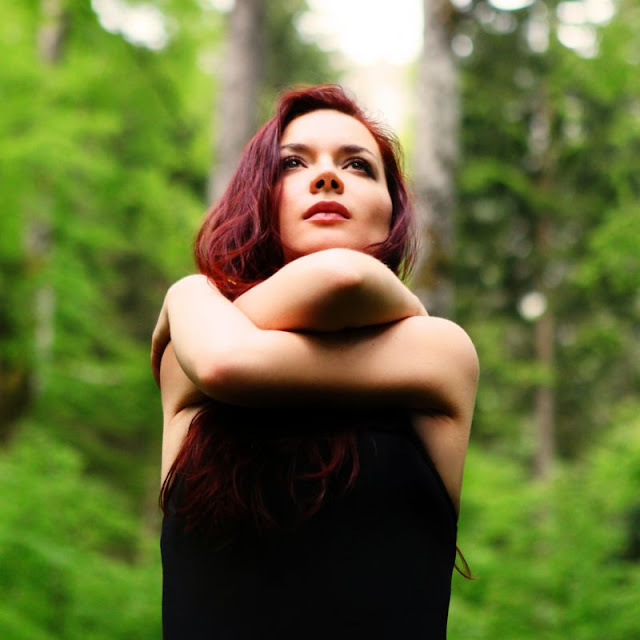 Pre-order
Posted by Republic of Jazz a la dirección 12:03 AM 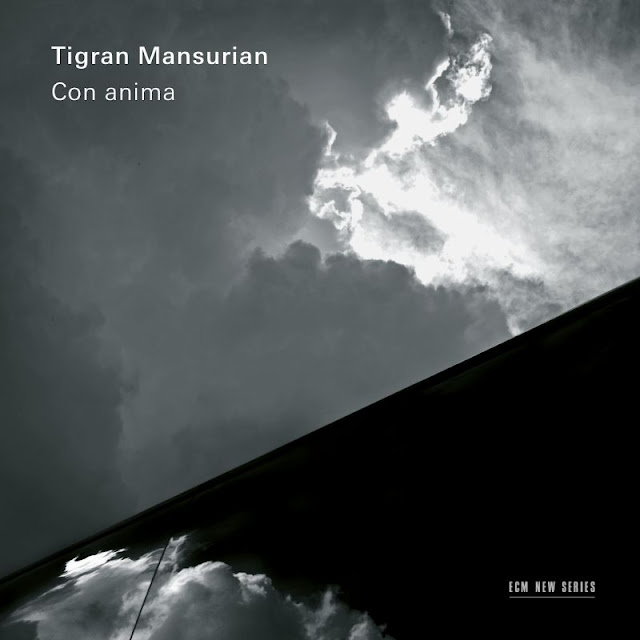 Conceived jointly by violinist Movses Pogossian and violist Kim Kashkashian on the occasion of Tigran Mansurian’s 80th birthday, the Con anima project brings together a dedicated cast of players to perform the Armenian composer’s chamber music. The emphasis is on newer pieces - only the Third String Quartet dates from the 20th century - but there is a timeless quality to Mansurian’s work, all of which resounds with the spirit of his homeland. “His works are full of signifiers that come from Armenian ornaments, paintings or stones, “ writes Elena Dubinets in the CD notes. “His music itself feels as if it was carved out of stone.” Sonata da Chiesa is dedicated to the memory of priest-composer-folklorist Komitas, an enduring inspiration for Mansurian. Agnus Dei is influenced by Armenian sacred music, and Die Tänzerin is based upon an Armenian folk dance. 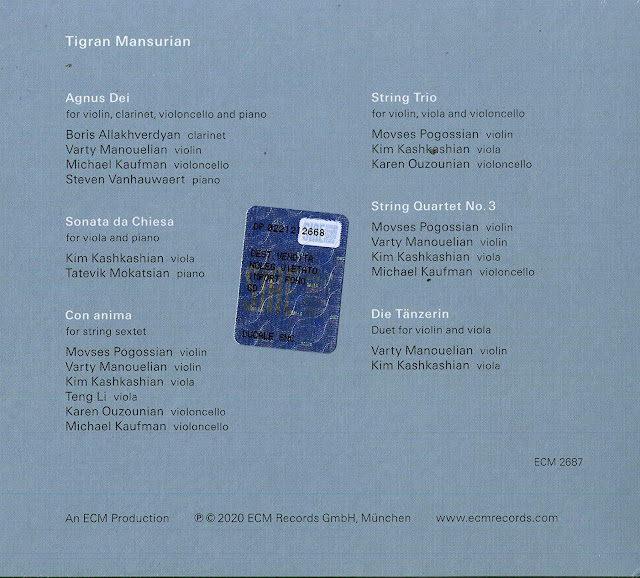 Pre-order
Posted by Republic of Jazz a la dirección 12:02 AM 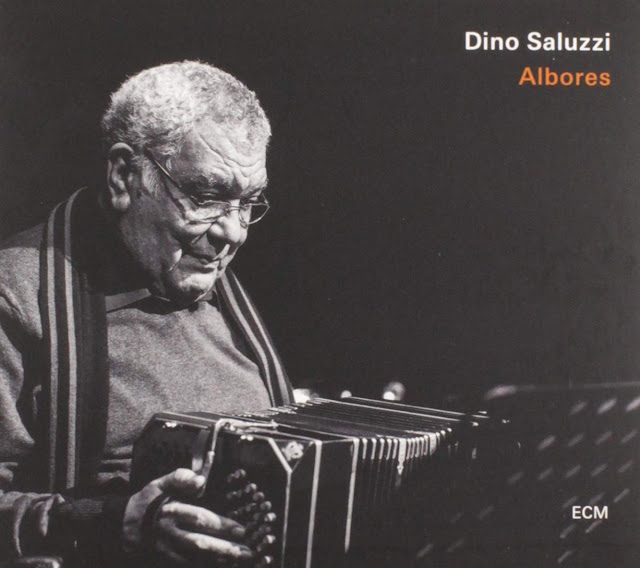 An album of soliloquies from the master.  After highly acclaimed albums in formations from duo and trio to family band and orchestra, here is the great Argentinean bandoneon player Dino Saluzzi in his first purely solo recording in more than 30 years. (The early solo albums Kultrum and Andina established his reputation outside his homeland). Recorded in the Saluzzi Music Studio in Buenos Aires between February and June 2019, it is a powerful reminder of Dino’s gifts as a musical storyteller of great subtlety.  His pieces, in this intimate recording, reach back to early memories; “Don Caye”, subtitled “Variations on the work of Cayetano Saluzzi”, is a most touching dedication to Dino’s  father.  Throughout, the bandoneonist reflects upon the fleeting passage of time, instrument and performer breathing as one.
1. ADIÓS MAESTRO KANCHELI (Dino Saluzzi) 03:56
2. AUSENCIAS (Dino Saluzzi) 04:58
3. SEGÚN ME CUENTA LA VIDA – MILONGA (Dino Saluzzi) 07:01
4. ÍNTIMO (Dino Saluzzi) 05:42
5. LA CRUZ DEL SUR (2DA CADENCIA) (Dino Saluzzi) 07:43
6. ÉCUYÈRE (Dino Saluzzi) 06:19
7. FICCIÓN (Dino Saluzzi) 04:35
8. DON CAYE – VARIACIONES SOBRE OBRA DE CAYETANO SALUZZI (Dino Saluzzi) 09:26
9. OFRENDA – TOCATA (Dino Saluzzi) 11:57
Dino Saluzzi: Bandoneon 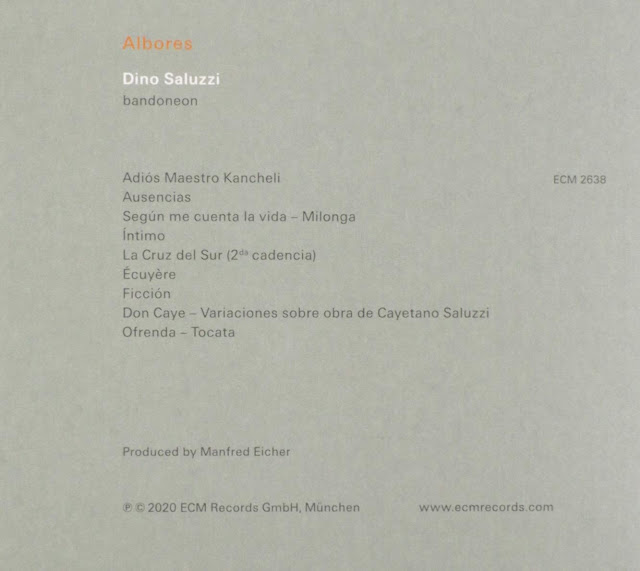 Pre-order
Posted by Republic of Jazz a la dirección 12:01 AM 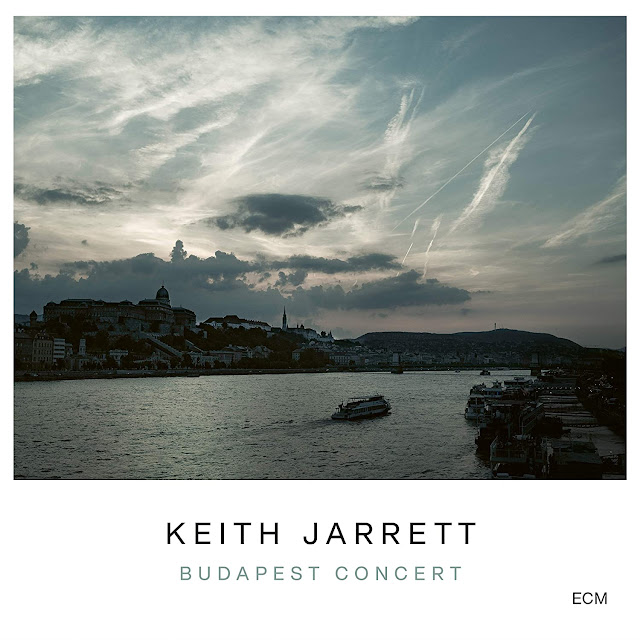 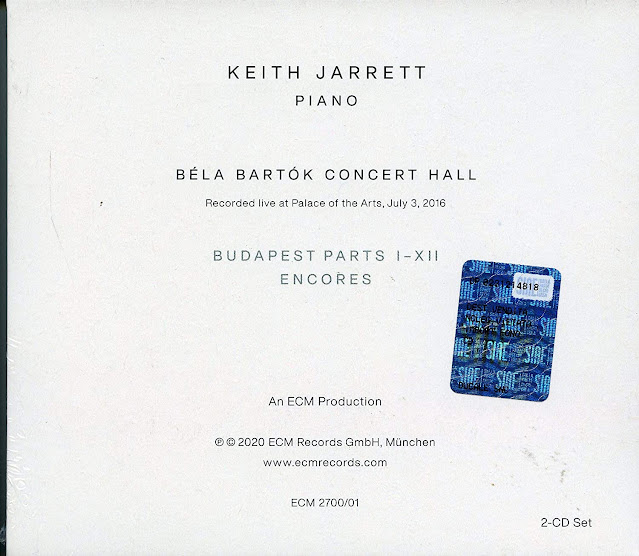 The second complete show to be issued from Keith Jarrett’s 2016 European tour – following on from the widely-acclaimed concert released as Munich 2016 - this double album documents the pianist’s solo performance at the Béla Bartók National Concert Hall in Budapest. Jarrett, whose family roots reach back to Hungary, viewed the Budapest concert as akin to a homecoming, and the context inspired much creative improvisation. Where Jarrett’s early solo concerts shaped a large arc of music over the course of an evening, the later concerts have generated suite-like structures, comprised of independent “movements”, each of them a marvel of spontaneous resourcefulness. Creative energy is applied also to familiar songs given as encores, “It’s A Lonesome Old Town” and “Answer Me”, transformed in the Budapest concert. 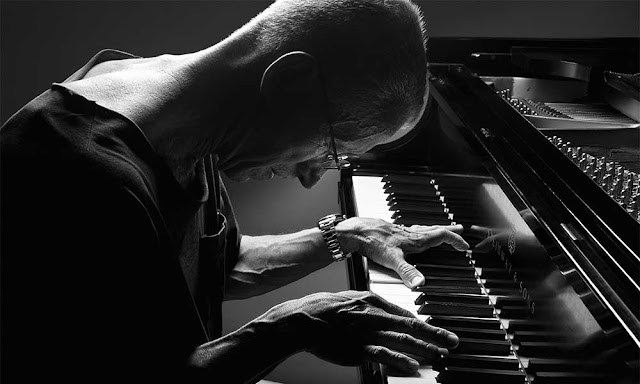