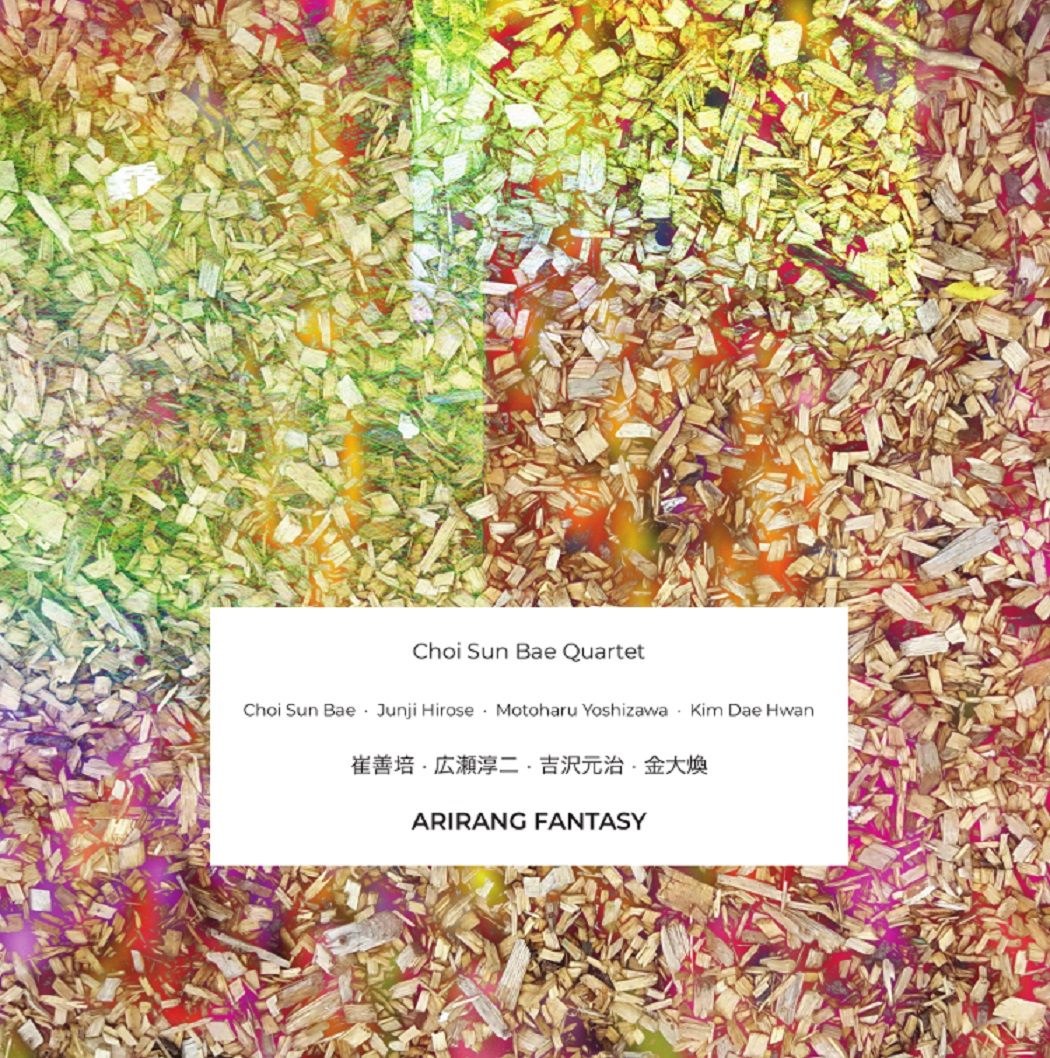 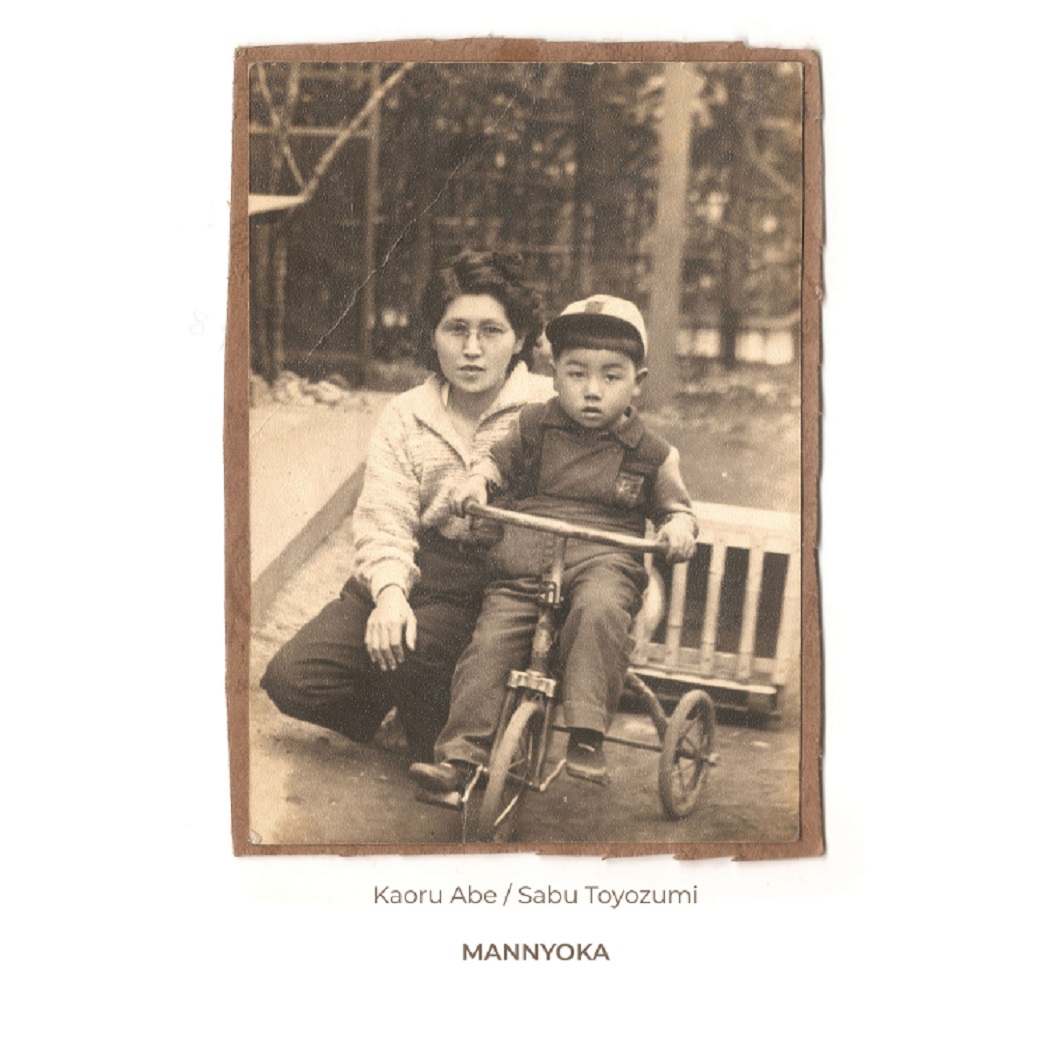 Japanese free/jazz sax legend, Kaoru Abe, dies at the age of only 29 in 1978, living a fast and crazy life and dieing of a drug overdose. His entire music career was only 10 years, from 1968 to 1978. In that short period, he was well recorded with around 30 releases, ten of which are solo sax efforts, duos with guitarist Masayuki Takayanagi, bassist Motoharu Yoshizawaand drummer Sabu Toyozuma. Mr. Abe also toured and recorded with Milford Graves, Derek Bailey and Toshinori Konda in 1977 & 1978. Sadly, nothing by Kaoru Abe has been in print for many years until now…

Many of his rare CD’s & LP’s go for big bucks on the resale market. This disc was recorded at two concerts in Tokyo in January and July of 1978, the year that Mr. Abe passed away. Those in the know, free/jazz freaks worldwide, should know of drummer Sabu Toyozumi from his work with Peter Brotzmann, Derek Bailey, Misha Mengelberg and Haino Keiji. ‘Part 1’ kicks things off with an immense blast with Mr. Abe on alto sax and Mr. Toyozumi on drums. Abe sounds a bit like Albert Ayler, although he plays alto & soprano saxes, bending and twisting every note in his own unique way. This duo recorded a few disc together and they sound just right working together, shadowing each other, tightly connecting no matter where they soar. If you savor what is essentially the beginning of fee/jazz in Japan, then you should really hear this disc. It is some 73 minutes long and it all flows together in powerful waves. So good to finally a disc back in distribution that captures the amazing talent & passion filled music of Kaoru Abe and Sabu Toyozumi. - Bruce Lee Gallanter, DMG 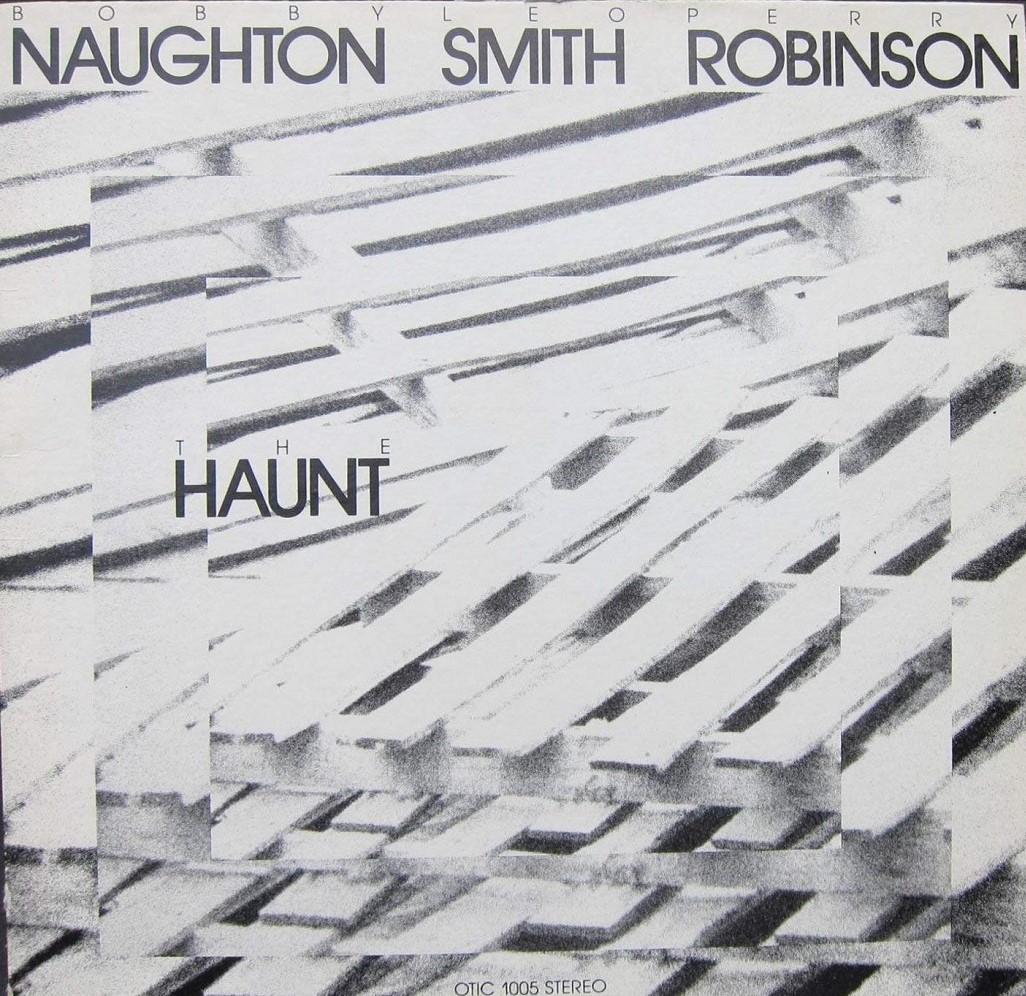 One of the most immediately accessible of all avant-garde jazz sets because it is pervasively lyrical. A continually floating, melodically curving series of conversations which subtly keep changing colors and timbral intensities while a mysterious implied pulse makes it all cohere in a rather dream-like way. But this is a most vivid dream, the kind that lingers in the mind long after the recording has ended. THE HAUNT is a a permanent and dateless addition to jazz discography.. . . . Nat Hentoff Modern Recording

THE HAUNT is a brilliant specimen of textural improvisation at its most concordant. Three masters of the art of spontaneous interaction expertly combine their talents and diverse influences to create music that is dissonant(in terms of conventional tonality, that is) yet euphonious, freely structured yet prudently disciplined. The results should prove accessible to anyone with an ear toward creativity and striking sound combinations, whatever the listener's normal musical preferences. Tom Bingham, AUDIO

THE HAUNT is an album of superb compositions played by a trio of superb musicians. Rather than swinging hard over a firm tempo, the music flows at a slow pace, evoking images that undulate according to the immediate texture of the improvisation. Although it explores the nexus between the New Music and Contemporary Classical Music, THE HAUNT is not pretentious or studied in any way. Its music is abstract without succumbing to the sterility of abstraction. THE HAUNT could very well be one of the most important albums released in 1977. Vernon Frazer, CODA

These calm pieces, with a touch of third-stream sonority to them, represent fast-music dallying quite delightfully with slowness…….

There couldn't be a better instance than this record to show how the true instrumental music is fast however slow it gets, and that it can only be created instantly in the swiftness of perception by which the player maintains the tension, the entire weight of the structure on his shoulders.


Acclaimed saxophonist and composer Miguel Zenón will release the single Milagrosa featuring Zenón and the Chicago-based internationally renowned Spektral Quartet on August 10, 2018. The single will be available on iTunes, Amazon, and CD Baby.


The single - featuring Zenón with Chicago-based Spektral Quartet - is from the upcoming album Yo Soy la Tradición, an ambitious concert-length work for drawing upon the rich cultural-folkloric traditions of Puerto Rico and expressed through the modernist lens of Zenón's compositions.

This track is from the full-length album Yo Soy la Tradición to be released by Miel Music on September 21, 2018. The recording is an ambitious concert-length work for string quartet and saxophone, drawing on cultural-folkloric traditions of Zenón's native Puerto Rico and expressed through the modernist lens of his compositions.

"Milagrosa" begins with an unabashedly futuristic introduction, where nimble melodic shapes played by the strings filter through modern harmonies, before settling into a flowing feature for Zenón's elegant, melodic playing. The inspiration for the work comes from the religious practice of La Promesa-making a promise to a Catholic deity in return for a favor; specifically, the title refers to a promise made to La Virgen de La Milagrosa ("The Miraculous Virgin"), a traditional song upon whose foundations Zenón crafted an entirely new and vital work. The ending is worth the price of admission for the breathless, extended soli passage with saxophone and the entire Spektral Quartet in lockstep-a tour de force of melodic invention that sets the stage for an unadorned statement of a folkloric melody that is frequently related to "La Virgen de La Milagrosa."

Yo Soy la Tradición, Zenón's eleventh release as a leader and fourth for Miel Music, is a work of startling clarity, synthesizing and building upon Puerto Rican folkloric forms through Zenón's unmistakable, multilayered compositional approach. Commissioned by the David and Reva Logan Center for the Arts and the Hyde Park Jazz Festival, Yo Soy la Tradición is a collection of eight works for alto saxophone and string quartet which feature Zenón and the Spektral Quartet. These chamber works reach far beyond the formula of a horn backed by strings, with the Spektral Quartet taking a central role in both driving and navigating the intricate compositional forms that are a trademark of the saxophonist's music.

Zenón set out to compose a series of chamber pieces taking both creative inspiration and formal patterning from his native Puerto Rico's cultural, religious, and musical traditions. The results are thrilling, and defy neat categorization with their emergent contemporary sensibility: structural beauty paired with emotional urgency.

The traditions Zenón takes as his points of departure include some he has explored in depth before such as Jíbaro, a major musical genre of rural Puerto Rico and the namesake of a groundbreaking album by Zenón in 2005. Other inspirations include traditions, both musical and not explicitly musical, that he had not studied in depth previously. 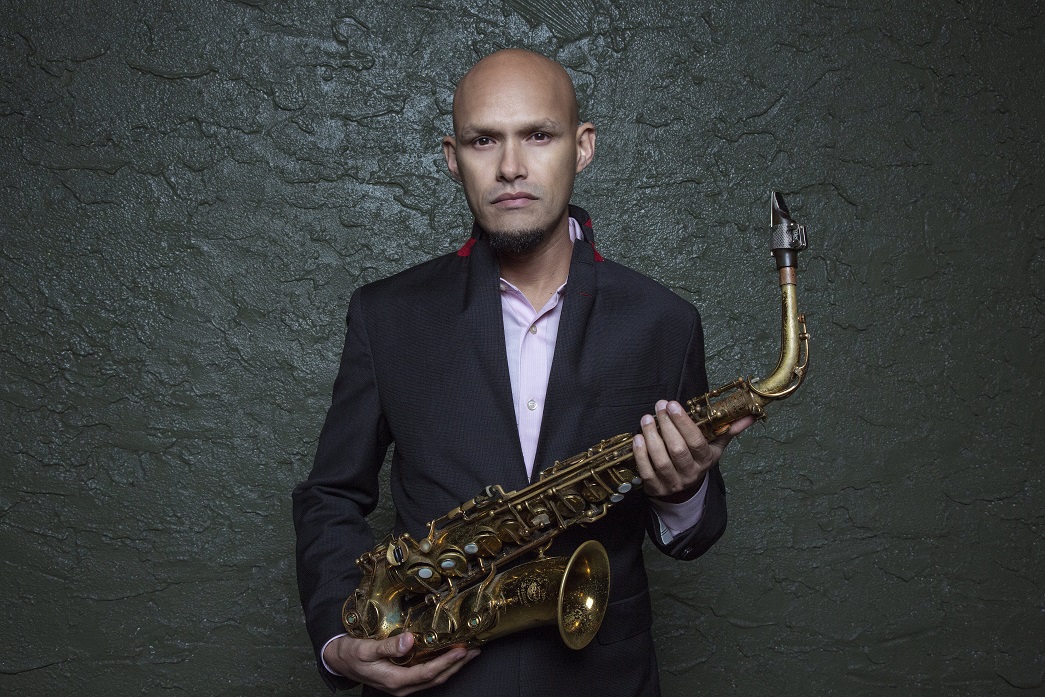 "My goal is to identify the elements that make each tradition unique," says Zenón. "If these elements are musical in nature, I'll extract them and use them as the main seed for a new piece of music-not trying to emulate the original, but using the original source as inspiration."

Another musical tradition informing Yo Soy la Tradición occurred as a result of Zenón's extensive preparation in string quartet writing. Although he has previously written music for string quartet on Awake, his fourth album released a decade ago, this new hour-long work led him to revisit works by the masters of the Western canon.

"I studied many chamber works from various periods," Zenón says, noting the collaborative aspect of working with Spektral as part of his compositional process. "As I was writing and revising, I was also able to integrate feedback from the members of the quartet, whom I would send sections and passages to."

In one sense, Yo Soy la Tradición is a culmination of Zenón's study of the cultural traditions of Puerto Rico. For over a decade, his regular trips to the country and his ongoing field research has granted him uncommon insight into the artistic resources afforded by the culture of the Island-in his words, a "seemingly endless well of information and inspiration," which is continually replenished by the families and communities who carry it forward as it evolves over generations.

With Yo Soy la Tradición, Zenón has attained another milestone in his musical development, music that stands at both the intersection and forefront of the musical traditions that he has studied and now made his own. 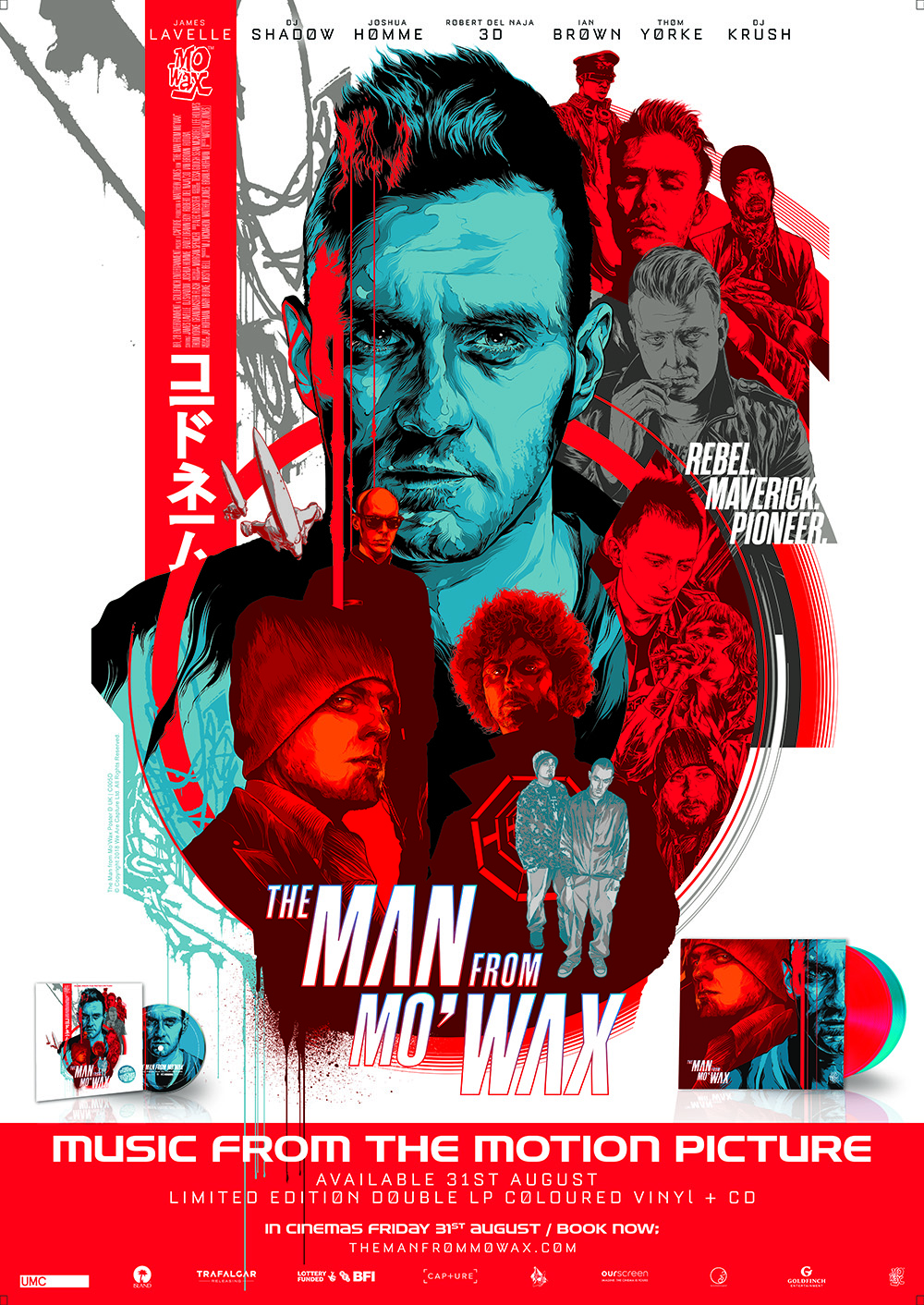 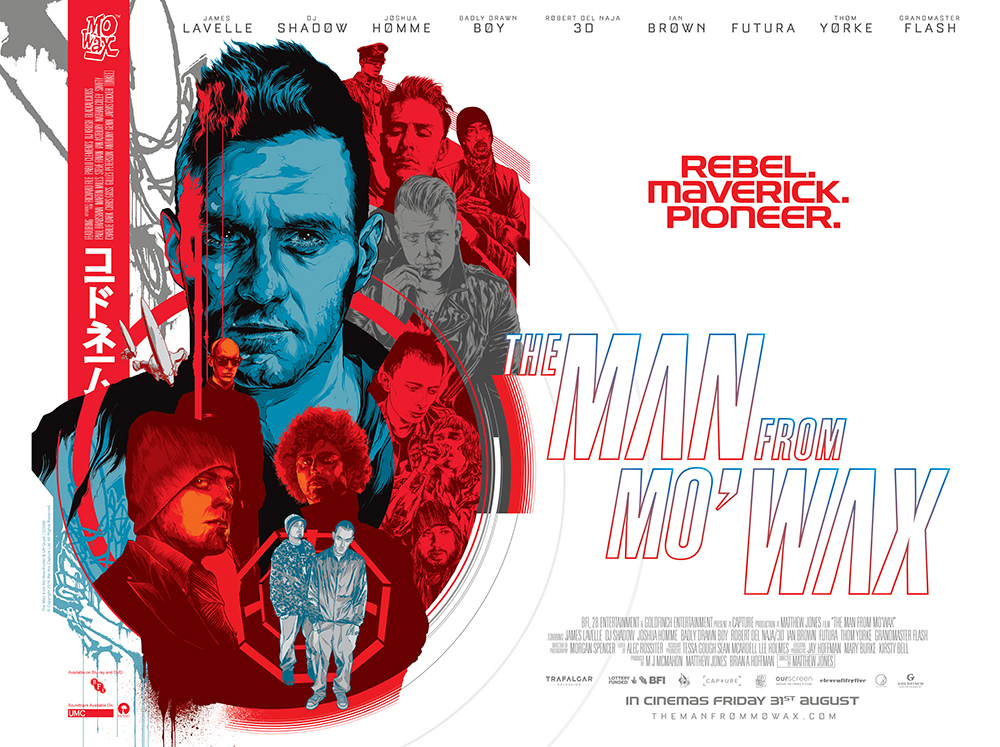 ‘The Man from Mo’Wax’ is an exhilarating, fascinating and insightful insight into the transient nature of creative peaks and music industry success. A puff piece it most definitely is not.

The narrative arc follows a trajectory from the cooler-than-cool golden teenager’s ascension, tough and arid later times, to the beginnings of salvation.

The film is an honest and unflinching portrayal achieved by the protagonist’s brave and candid permission for nothing to be concealed. Musical, familial and romantic relationships are also explored, as is his battle with drugs. 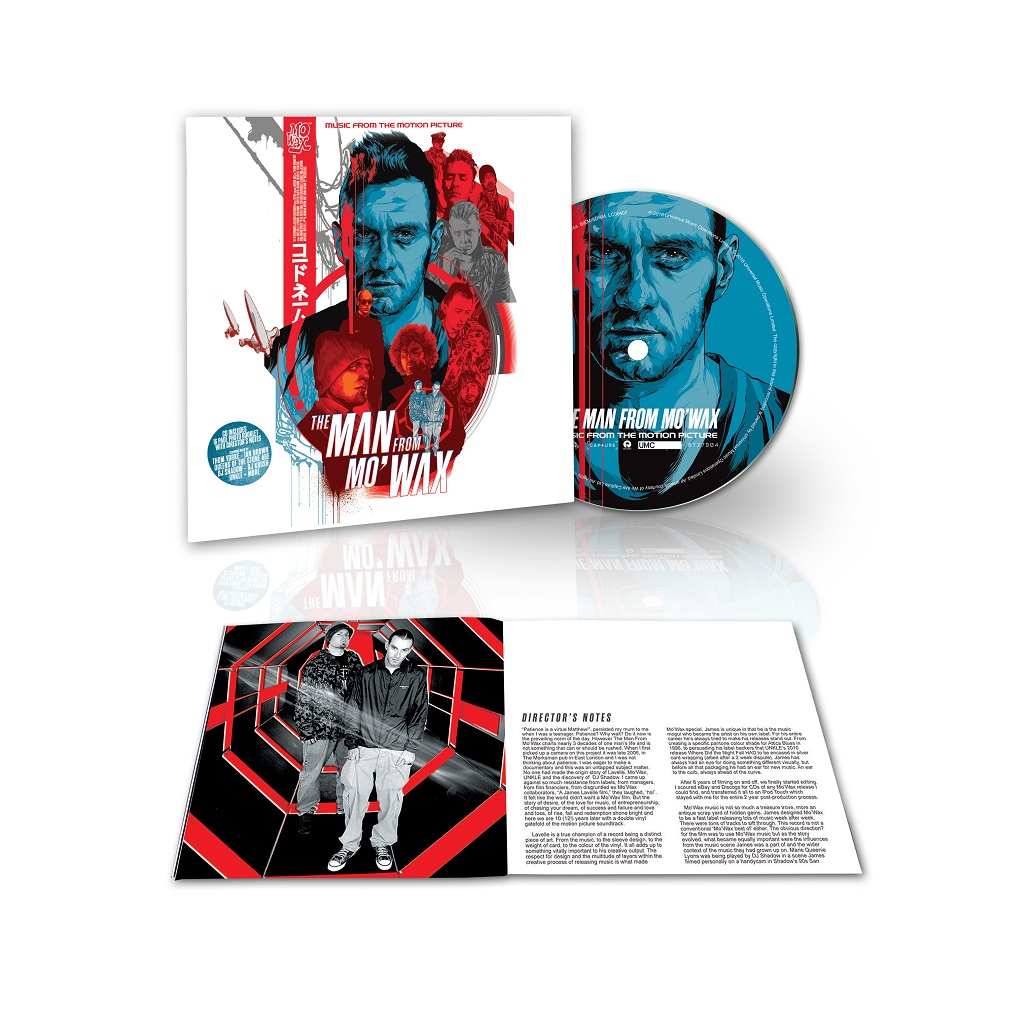 Flourishing in a fertile period alongside fellow iconic labels Metalheadz, Ninja Tune, Warp, Junior Boys Own and Strictly Rhythm, Mo’Wax was most synonymous with trip hop, which culminated in the release of DJ Shadow’s peerless classic ‘Endroducing’ and his first seminal UNKLE album ‘Psyence Fiction’, recorded in collaborative partnership with Lavelle, in August 1998.

The film will be released in selected cinemas nationwide on the 31st August – celebrating the 20th anniversary of ‘Psyence Fiction’’s release. Following that the DVD/Blu Ray will be released September 10th with TV streaming TBA. Motion picture: ‘The Man from Mo’Wax’

Soundtrack: ‘The Man from Mo’Wax (Music From The Motion Picture)’