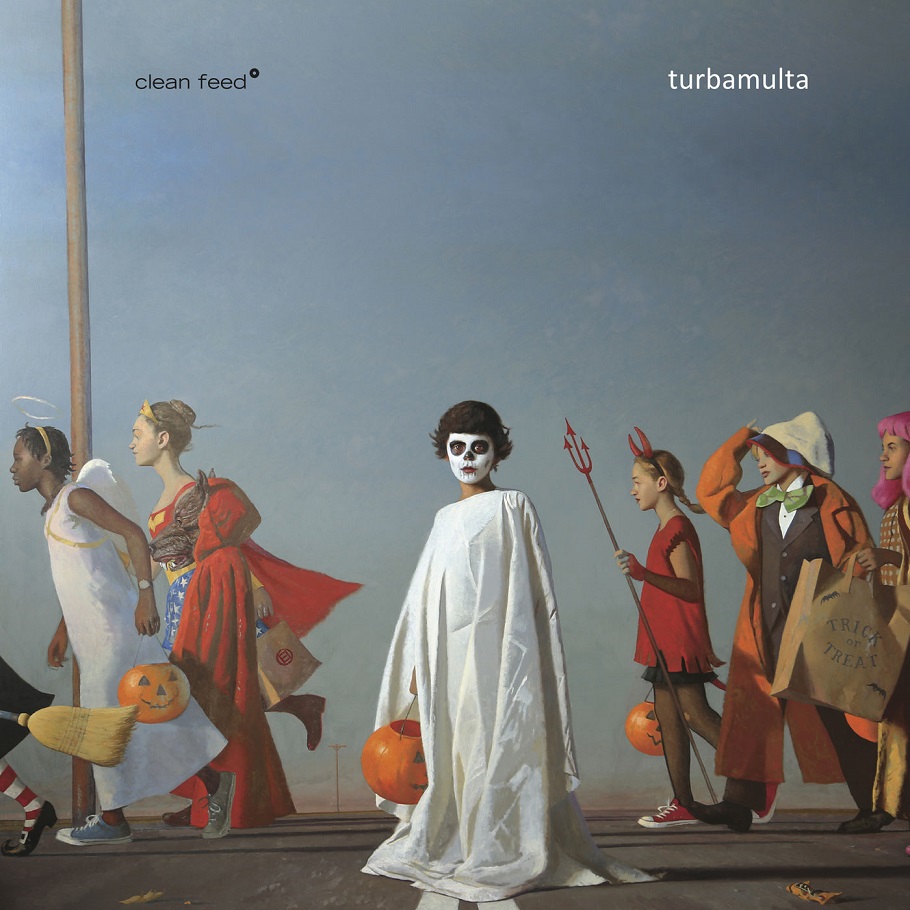 Five musicians came together to create a place where new dynamics of performance and musical creation materialize – the Turbamulta (a Portuguese word we could translate as “rowdy mob”). Each instrument, an original, individual voice magnified by new sound production techniques, existing on the border between interpreter and composer, embodies both beyond the confines of formal contemporary classical music ensembles.

Musical gestures recovered by listening to improvisation sessions lead to new sessions and new gestures, remaining constantly open – be it for the purpose of a recording or a live performance. Open to new convergences, divergences, uproars and romanticisms, each musician wandering in their own thoughts until another one calls out, pulling them by the arm to come out to play, or at something else. If one can be made to feel a bit like Borges’ Averróis, watching children playing in the yard while failing to understand what games they’re playing at, it’s because the union of this turbamulta develops forms of communication that are almost indiscernible (unlike the very well-defined “patterns of relationship” of improvised forms: reiteration, imitation and melodic transposition, or alternating between fixed and free moments), and the music they play is intense and bright, profoundly articulated, enigmatic and endlessly surprising.

This communication has to do with the fact that, in short, the group brings together two new interpreters to the preexisting trio of Eduardo Raon, Joana Sá and Luís Martins (Powertrio), whose granular and glistening clouds of sound the percussionist Nuno Aroso thickens and the cellist Luís André Ferreira makes long notes and lines stand out from. The symbiotic rapport between the quintet becomes quite clear, after the introduction, in the central section of (like a mast, an arm, a head) where the first cluster of bass notes on the piano leads to short and energetic sounds, and the second one leads to fine and delicate textures. Listening more and more intently, one can sense other signs of what happens between them.

That first movement leads to the sound of cow bells’, which all of them play, then to Bartók pizzicatos on the guitar and the cello, to low-pitched attacks from the harp and the piano, finally rising to a series of inverted sounds – a similar mechanism appears during the metamorphosis at the center of in holes, when all the instruments become, for an elongated time, percussive. The romanticism of exagero minúsculo reoccurs on the first section of and they would stumble upon some figure, accompanied by echoes of the harp that progress until the end, in the background, as pulsating chords sounding off the guitar, at first, then the harp, and later the piano and the vibraphone.

As if from the bottom of ocean, the other musicians join these distant pulses briefly, leading us to back away from the metaphor of the restless children and reminding us that music can be founded upon the spontaneous relations between mysterious beings of the abyss, whom we can admire without worrying ourselves with trying to fully understand.