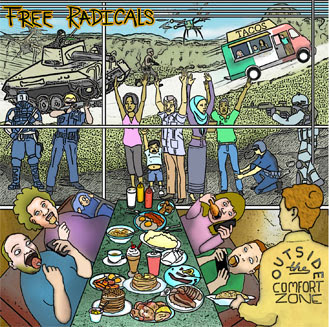 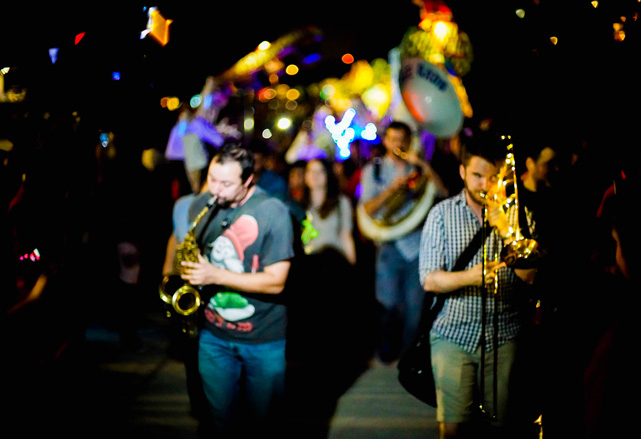 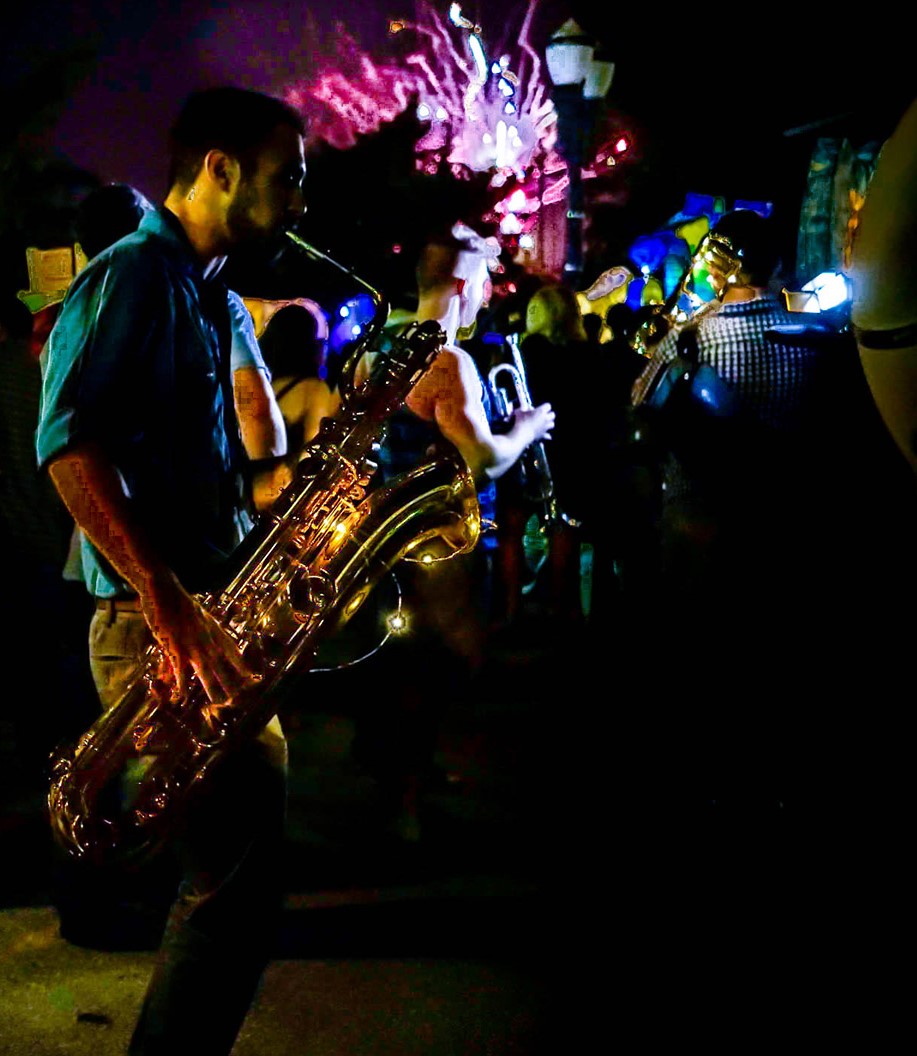 1. The Legals Have a Lunch
Free Rads originally recorded this track to be included on their all-breakbeat CD "Freedom of Movement.” Havikoro, the b-boy collective executive producing the 2015 CD felt the tune sounded too goofy for breakdancing. However, goofy was exactly what Free Rads was going for, so they kept the tune in the vault. Featured are solos and arrangements by Jason Jackson on alto sax, Tom VandenBoom on trombone, and Aaron Varnell on tenor sax. Long time collaborators jump in on the jam -- Harry Sheppard on vibes, Al Pagliuso on percussion, Pelayo Parlade on piano, Theo Bijarro on bass, and  Nelson Mills III on trumpet. Nelson played trumpet on the Tighten Up, a Houston funk tune that was the number one hit in the nation the week drummer / producer Nick Cooper was born.

‘The Legals Have a Lunch’ is an alternate title for this new CD, with its cover art showing a family of descendants of European immigrants in a diner, eating a feast and looking at their phones, oblivious to the apartheid system right outside.

2. Doomsday Clock
‘Doomsday Clock’ is a ska tune by drummer Nick Cooper featuring solos by Tom VandenBoom on trombone, Matt Serice on trumpet, Aaron Varnell on tenor, and Al Bear on guitar. Guest musicians Lynn Bechtold on violin, and Harry on the vibes all join in.

Since 1947, the Doomsday Clock has been updated by the members of The Bulletin of the Atomic Scientists to represent the likelihood of a human-caused global catastrophe. 'Make America Great Again' has been a pathological escapist cultural response to a world with looming climate, military, pollution, and ecosystem collapses. Free Radicals plays ‘Doomsday Clock’ as a rejection of anti-scientific political posturing and as a tribute to the scientists who do their best to bring attention to things that really matter.

3. Chicha Revolución
Bass player Jacob Breier wrote this tune recalling 1970s Peruvian Chicha music. It starts off with a guitar solo by Al Bear and features solos by Pete Sullivan on baritone sax, Aaron Varnell on tenor, and a bridge featuring Matt Serice and Henry Darragh on keys, and Pelayo Parlade on piano.

4. Carry Me To My Grave
Trumpeter Doug Falk wrote this tune during a month when the band was playing a lot of funerals. Doug moved to New Orleans soon after writing the song, handing off the baton to trombonist Tom VandenBoom. The recording was done in a living room, and features solos by Aaron, Al B., Harry, Matt, Jason, Harry, and Tom.

Over the 21 years of Free Radicals music, ten of their musical collaborators have died (Ramesh Mishra, Greg Harbar, Zin, Little Joe Washington, Folasayo Dele-Ogunrinde, Carl Adams, Jeff Wells, Niyi, Stefan Schultz, and Joseph Jackson). With a huge extended family of musicians in their 20s, 30s, 40s, 50s, 60s, 70s, and up to Harry Sheppard at 89 years old, the Free Rads know the next funeral they play might be for one of their own.

5. Screaming
Free Radicals often tracks solos and arrangements over loops made from recordings of live improvs. Most of the material on Free Rads' 3rd CD, "Aerial Bombardment," was recorded in this manner. 'Screaming' is a hybrid mix of recordings from Sound Arts Recording Studio and two shows at at Avant Garden, the late night Houston hang-out that’s been around as long as Free Radicals (21 years). It features solos by Aaron and Al B., and percussion by Charlie Perez.

There has been a lot to scream about in the last year. ‘Screaming’ is an expression of the band’s frustration.

6. Dadaab
Though this song by bassist Jacob Breier references music from the Horn of Africa, when Subhendu Chakraborty came up with a great tabla part for it, producer Nick Cooper gladly recorded it (the band has never sought purity). It also features Muhammad Jafari on doumbec, solos by Tom, Jason, Aaron, Pete, and Nick C. on drum set, clavinet, and talking drums. Dadaab is the world's largest refugee camp, and Free Radicals has benefited musically, personally, and professionally from Houston's large and vibrant refugee population. Free Radicals musicians have no patience for anti refugee rhetoric, and are proud to have refugees in their group, as well as among their students, friends, coworkers, and spouses.

7. Freedom of Consumption
This breakbeat came out of an improv studio session with help from Henry Darragh on piano, Robert Chadwick on flutes, Al P. on congas, and Subhendu on tablas.

8. Angola 3
Nick Gonzalez, the Free Rads’ sousaphone player wrote this one. It’s been played at protests, weddings, funerals, and every other type of gathering the band performs. It features all the horns jamming, with Harry on vibes, and Matt on organ.

The Angola 3 (Robert King, Albert Woodfox and Herman Wallace) were long-time political prisoners in Louisiana's Angola Prison. A long modal piece, ‘Angola 3’ is a tribute to these former prisoners and anyone who has sat in a cell for years deprived of human contact and music.

9. Manifest Dust Bunny
Pete Sullivan, the baritone sax player, wrote this piece and it immediately clicked with a recently expanded 5 person horn section. With quick alternating punk, ska, and funk parts and no solos, it is intended as an overture of music the Free Rads musicians have listened to since high school.

Unfortunately, Manifest Destiny is a worldview that is still around, clogging up Turtle Island from Immokalee to Arizona to Cleveland to Standing Rock. Free Radicals looks forward to seeing it vacuumed up once and for all.

10. Water Beats Rock
Alto sax player Jason Jackson wrote this slow jam in tribute to 70s Bruce Lee movies. The title is a reference to Rock, Paper, Scissors, cinematic boat scenes, and the taoist principle of becoming like water. It features solos by Jason, Tom, Pete, Aaron, and Al B. and alternating bass lines by Jacob and sousaphone by Nick Gonzalez.

11. Solidaridad de la Sierra
Pete Sullivan wrote this one, featuring Robert Chadwick on flutes, Al P. on triangle, and solos by Matt, Tom, Pete, and Jason. Free Rads dedicates this song to mountains and indigenous people who live on them, and intends it as a protest against the mining companies that put entire mountain ecosystems into a grinder for one-time mineral profits.

12. Audacity of Drones
This song features loops from live recordings of a show in which all three sax players brought out baritones, and something terrifying came out.

Like most US presidents, Barack Obama has a legacy of killing innocent civilians and opening up wars on new fronts should land him in front of a war crimes tribunal. The Free Radicals hopes to honor his innocent victims and to invoke the sounds of death machines whose existence taxpayers finance, and have come to accept as normal. 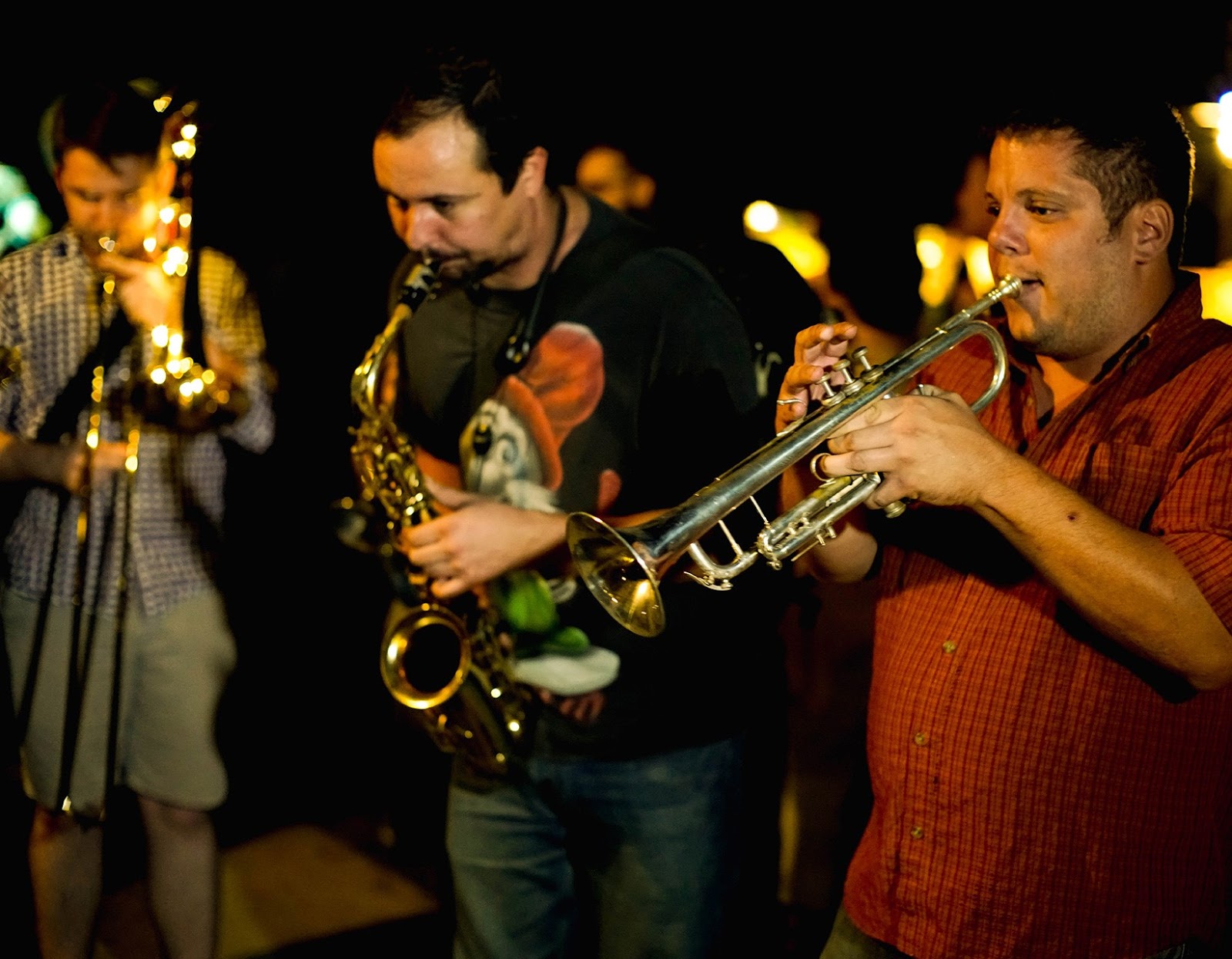 13. Beyond Vietnam
Jason Jackson wrote this tribute to Southeastern Asian psychedelic music from the 70s. It features solos by Jason and Al B. MLK's ‘Beyond Vietnam’ remains among the most important anti-war speeches in history. Free Radicals musicians find themselves in a weird United States that has failed to learn anything from the crucial message MLK died to deliver.

14. Space Witch
Jacob Breier wrote this reggae tune and invited friend Will Van Horn on the pedal steel. Often, Free Radicals tries to give its songs political titles or associate them with political causes, but this song is simply about a space witch.

15. Scrapple from the DAPL
Pete Sullivan wrote this one, and it features solos by Harry and Pete. Free Rads Street Band has been honored to stand with the resistance against the Dakota Access Pipeline (and every other pipeline).

16. New Sanctuary Movement
Jason Jackson's song is a tribute to immigrants and those who protect them, and a middle finger to anyone who tries to demonize the immigrants who have improved our society in so many ways. It features Nick on percussion, and solos by Aaron, Jason, Tom, Pete, and Al.

17. Cabinet For Sale
Al Bear's quick changing blues-meets-samba tune mocks the oligarchs running our nation after absurd promises to ‘drain the swamp.’ It features Al B. and the horns trading off melodies and Brazilian percussion by Charlie.

18. Stump Stomp
Aaron Varnell wrote this tune after a protest across the street from a Donald Trump fundraiser in Houston’s River Oaks. Donald Trump protests have brought out Muslims, gays, #blacklivesmatter activists, DACA recipients, minimum wage workers, and environmentalists to speak with one common voice. That's one thing for which Free Radicals thanks Trump.

19. Cheeto News Coma
Where can we hide from the 24-hour media cycle and it's endless portrayals of our hideous president? This breakbeat features Subhendu and the sax players.

20. Survival of the Oblivious
Harry Sheppard's multiple mallet instrument tracks weave in and out of this instrumental reggae tune. It also features Pete, Aaron, Tom, Subhendu, and alternating bass lines by Jacob and sousaphone lines by Nick G..

21. Ambush ICE
Pete Sullivan's frantic tune features Harry, Robert, and Nick G. It’s an attempt to tap into the state of those living in fear of an imminent ICE ambush and chase scene, with a short interlude in a muzak elevator.

22. A Call For All Demons
After many years of playing this 1956 tune by Sun Ra and collaborating with former Sun Ra vibraphonist Damon Choice, Free Rads decided to put them together for this recording done entirely in the musicians’ homes. Damon and Harry play on this tune like little kids, which can make everyone forget that between the two, there are well over 100 years of vibraphone experience. The song features Robert on flutes, Matt on organ, and drummer Nick C. plays a funk breakdown on Brazilian instruments, including a repique he got from Damon.

23. American Food Chain
This was a piece from years ago, featuring Paul Winstanley on bass, that the Free Rads felt would close out the instrumental CD well. Free Radicals usually features vocalists, poets, and rappers, but for this album, the band went all instrumental, intending to make up for this by releasing a lyric-filled CD next.