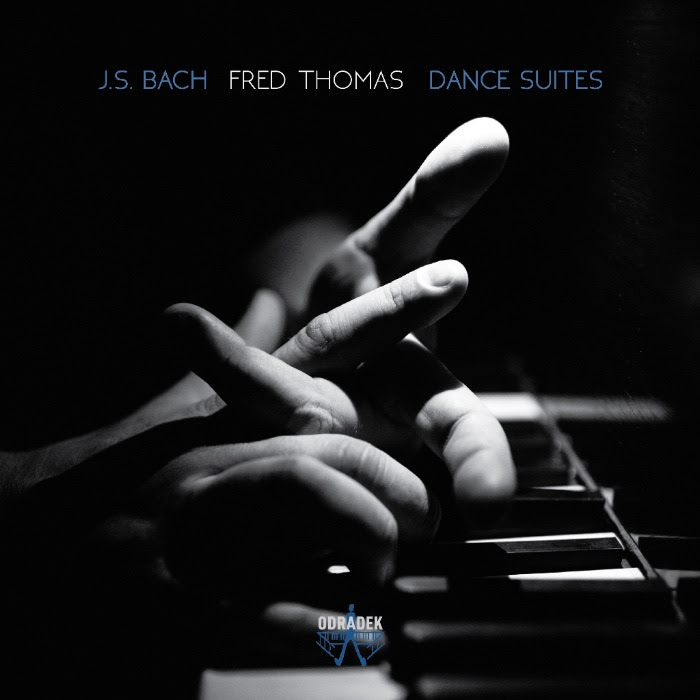 In a moment of lucidity, I wondered: when you’re dealing with the most miraculous body of human creation in all the arts, when are you ever ready? Life is short. Bach himself was not prone to procrastination. He produced a quantity and quality of music some consider literally unbelievable. Fred Thomas

London-based multi-instrumentalist Fred Thomas presents J.S. Bach’s exceptional keyboard music in new and exciting guises on this innovative disc. Performing on the piano, Fred Thomas’s insightful interpretations of Bach’s music are enhanced by an approach pioneered by Glenn Gould: the use of the recording process itself as an independent, creative art form. Using ten microphones in different combinations, placed near or far from the sound source depending on each movement’s character, Fred Thomas has sought to give each piece on this disc the space to inhabit its own, unique soundworld. This process remains relatively under-explored in classical music recording, but has been used on this CD as a meaningful interpretative tool. 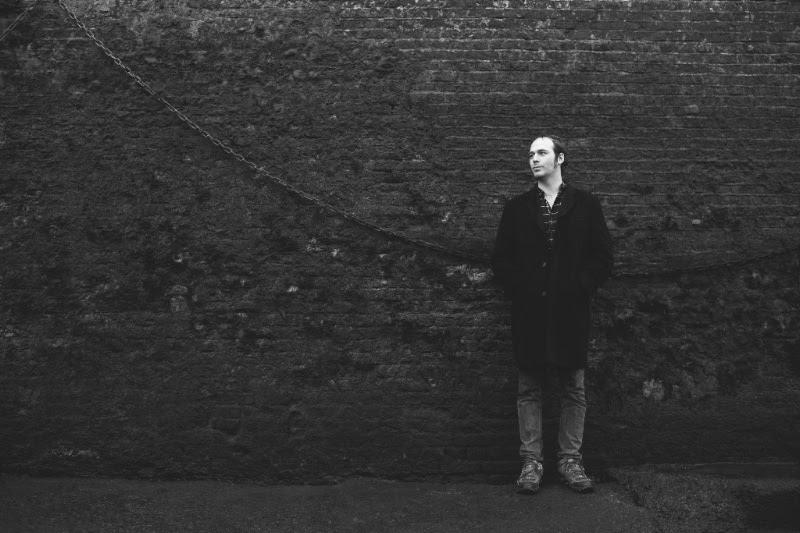 A highly versatile musician, Fred Thomas has chosen for this CD a selection of Bach pieces about which he feels passionately. Highlights include the epic opening Sinfonia from BWV 826, dignified Sarabande from BWV 817, and imposing Gigue (BWV 812); the warmth and playfulness of the Allemande (BWV 816) and broad humour of the Aria (BWV 828); the radiant Courante (BWV 817); and the deep serenity of the Prelude, BWV 806. Fred Thomas explores the individual character of each piece with great sensitivity, creating a nuanced and intimate recital sure to persuade the listener into hearing Bach in new ways.

Fred Thomas brings to this disc his wealth of musical experience in different genres. Projects include The Beguilers, a quartet that interprets Thomas’s song settings of poetry in English; a duo with his violinist father, Peter Thomas; a sextet with Martin Speake that explores polyphony in jazz improvisation; and a tribute to Richard Wagner with jazz pianist Liam Noble. 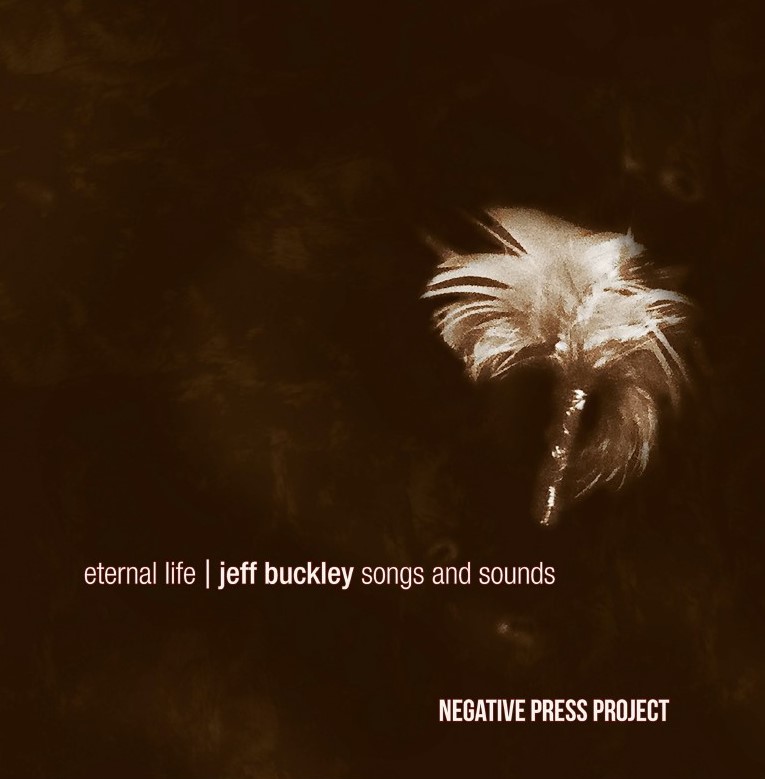 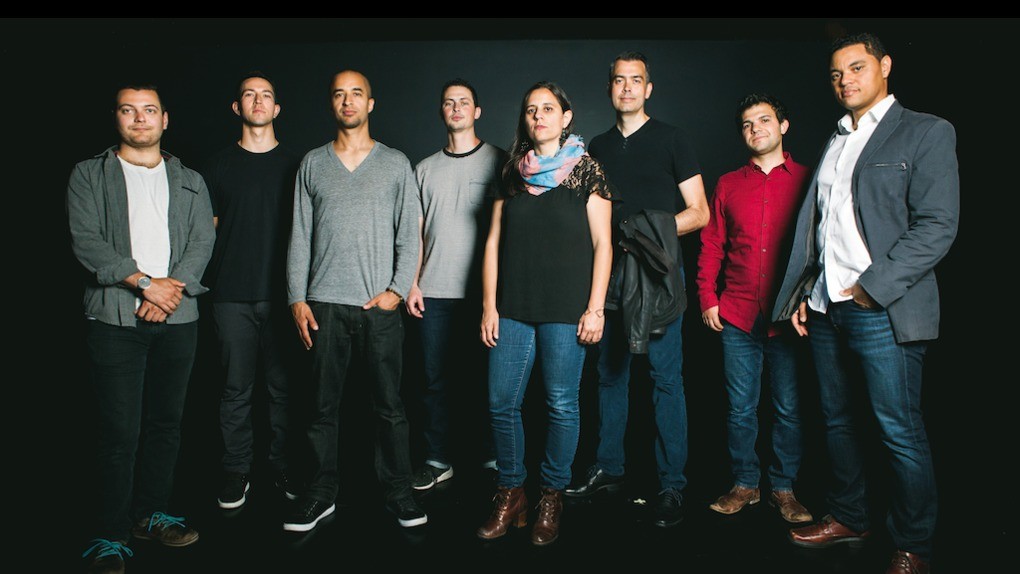 Jeff Buckley released one album during his all-too-brief life, but 1994’s Grace catapulted the beautiful young artist into the pop cultural firmament, where he remains an incandescently glittering presence two decades after drowning in the Wolf River. Dozens of singers have covered his songs in the ensuing years, but there’s never been a tribute like Negative Press Project’s Eternal Life | Jeff Buckley Songs and Sounds, which was produced by bass master Jeff Denson and is slated for release on his non-profit label Ridgeway Records on November 17, 2017.

With a background in rock and pop, Lion came up with the idea of a Jeff Buckley project while “looking for music underserved in the modern jazz canon,” he says. “I’ve heard Brad Mehldau play some Buckley but not too many other instrumental versions. I think it’s such exalted material with a certain generation that it felt off limits.” 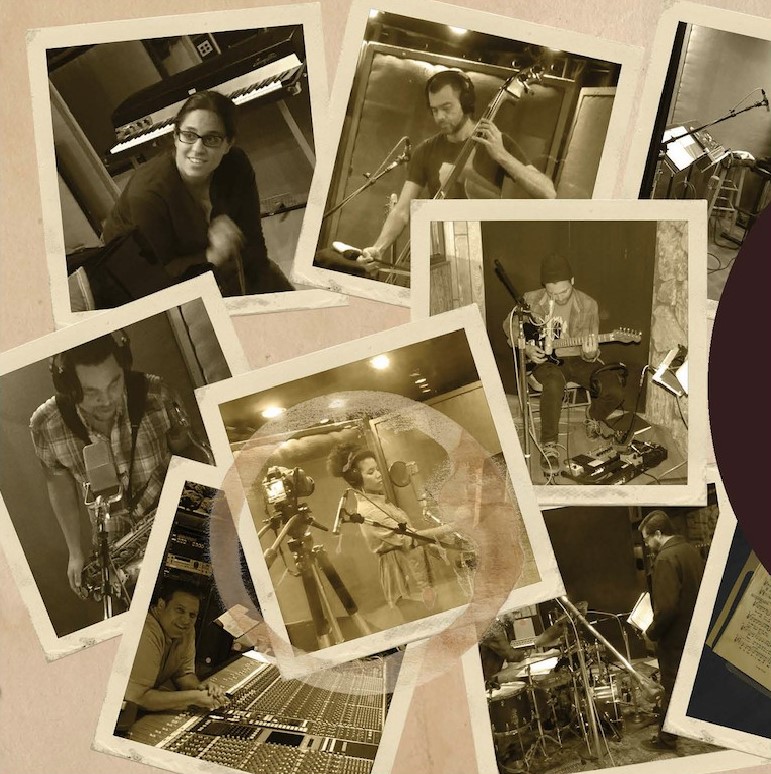 When he approached Dineen, a player versed in classical music and Latin jazz, about arranging some Buckley songs for a concert he found an eager co-conspirator and fellow Buckley aficionado. NPP was already a talent-laden working ensemble with its original cohorts, tenor saxophonist Tony Peebles (of the Grammy Award Winning Pacific Mambo Orchestra), trumpeter Rafa Postel (Katchafire), and alto saxophonist Chris Sullivan; but this was further affirmed after a series of concerts with the addition of saxophonist Lyle Link, drummer Isaac Schwartz, and the brilliant young guitarist Luis Salcedo (who introduced his gorgeous collaboration with Colombian vocalist Susana Pineda on the 2016 eponymous Ridgeway album Opaluna).

One reason the Buckley material succeeds so vividly is that Lion and Dineen have attracted a similarly stellar community of musicians to augment the ensemble, bringing their vision to life in the studio, with performances from the highly musical drummer Mike Mitchell, veteran altoist James Mahone, and trumpeter Max Miller-Loran.

Eternal Life opens with Lion’s original requiem for Buckley, “Wolf River,” a haunting theme that evokes the beauty of Buckley’s sound and the inconceivable tragedy of his death at the age of 30. Chris Sullivan’s solo alto sax delivers the aching prelude for “Mojo Pin,” a languorous dreamscape that seems to waft in the summer breeze. “Grace,” one of several pieces that Buckley co-wrote with guitar explorer Gary Lucas, is one of the album’s most intricate arrangements, a gossamer matrix of guitars, effects and intertwined saxophones. While staying close to the original song, Lion’s arrangement also gives the players a degree of freedom to improvise around the edges. “Many of the players didn’t have a direct connection to the source material and they could bring their own voices to the project,” Lion says.

“We had some opportunities to make choices about where to open it up,” Dineen adds. “With all the voices, we could arrange as densely or as open as we wanted. Sometimes decided to play a shell game with the instrumentation and pared it down to a quintet.” 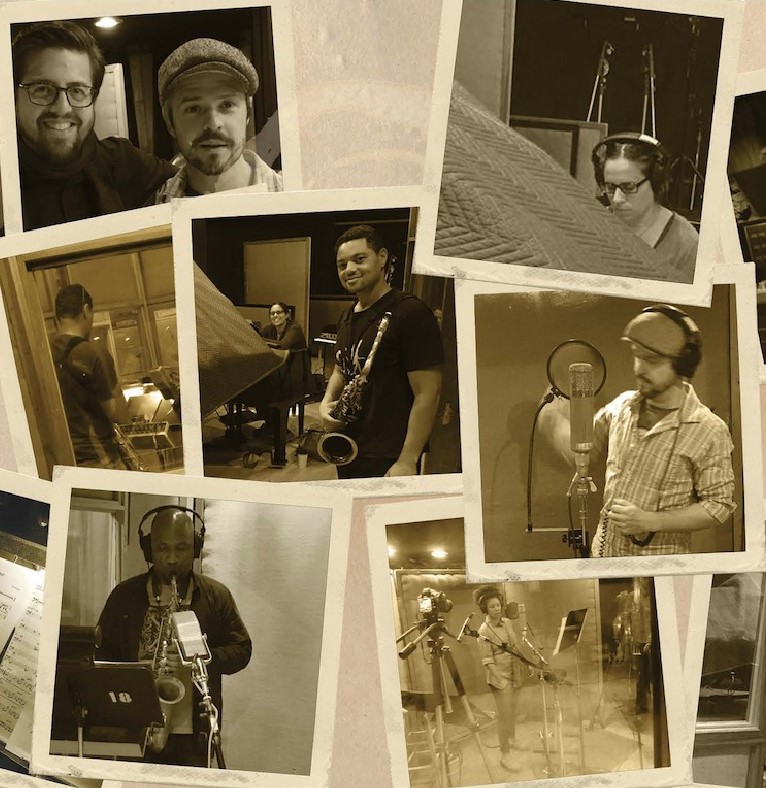 Dineen’s simmering arrangement of “So Real” is one of the sinewy quintet tracks, a piece that takes considerable liberties with the song by unleashing Salcedo’s expressive guitar while remaining entirely recognizable. Lion’s three-horn interpretation of the harmonium prelude to “Lover, You Should've Come Over” provides a moment of reflection before his passionate, gospel-infused take on the song. The album closes with Dineen’s rapturous arrangement of “Anthem (For Jeff Buckley),” a piece that feels like it could have come from the pen of Abdullah Ibrahim, if he’d been an indie rocker.

Negative Press Project is the latest singular ensemble to emerge from the California Jazz Conservatory in Berkeley. The band released an impressive debut album see evil eyes | civilize in 2015 focusing on original compositions by Dineen and Lion. He first hit on the idea of assembling the music collective while preparing for a hike up Yosemite's iconic Half Dome, but "it didn't really come together until I connected with Ruthie at the CJC," Lion says, "and because of her we've been able to establish a purpose and mission." He also credits Jeff Denson, the bassist, CJC professor and founder of Ridgeway Records, as the driving force behind their latest recording, Eternal Life, as he approached the band about producing the album after they performed several Buckley arrangements at the CJC.

With encouragement from their closest associates in the group, Lion and Dineen "started writing a lot," she says. "The format meant we were working with great musicians, creating arrangements based on our experience in the Bay Area. That's my favorite thing in the world, pulling people together who are serious to create group identity and group story. There are many voices, but we all come together to tell one story. We're both really driven to create new art."

Born and raised in the Northern California town of Fairfield, Ruthie Dineen was drawn to music as a child, studying and playing jazz and classical music throughout adolescence. Music remained a central force in her life throughout her undergraduate years at UC Berkeley studying history and music, and graduate studies in social work at Cal State East Bay. Over the past decade she's focused on music performance and community arts, and since the fall of 2011 she's served as deputy director of programs at East Bay Center for the Performing Arts in Richmond, Calif.  At the same time, she immersed herself again in jazz, earning a performance degree in jazz studies from the California Jazz Conservatory (where she received the Jamey Aebersold Scholarship).

A prolific composer, Dineen is also a founding member of RDL+, a collective quartet that hosts the monthly Bay Area Bridges concert series at Oakland's Studio Grand (where Dineen collaborates with different performing artists each month creating new multi-discipline works encompassing theater, music, dance, poetry, and visual art). When not working with NPP or RDL+, Dineen can be found collaborating with a wide range of jazz, Latin, and classical musicians, including vocalist Amie Cota, members of the Amaranth String Quartet, Bululú, and the salsa groups N'Rumba, Candela, and Somos el Son.

Fellow CJC alumnus Andrew Lion was born in Oakland and raised on a rich musical diet from his parent's record collection, absorbing the sounds of Motown, Led Zeppelin, Duke Ellington, the Beatles, David Bowie, and Pat Metheny Group. He started his musical journey on piano, then tried out the guitar before settling on electric bass as a young adult. A mainstay on the Bay Area music scene, he's toured with the rock band Spoke and the Dave Tweedie-directed pop combo OONA featuring vocalist Oona Garthwaite. He's also worked widely with San Francisco singer/songwriter Jeff Campbell, with whom he performed on Jimmy Kimmel Live. 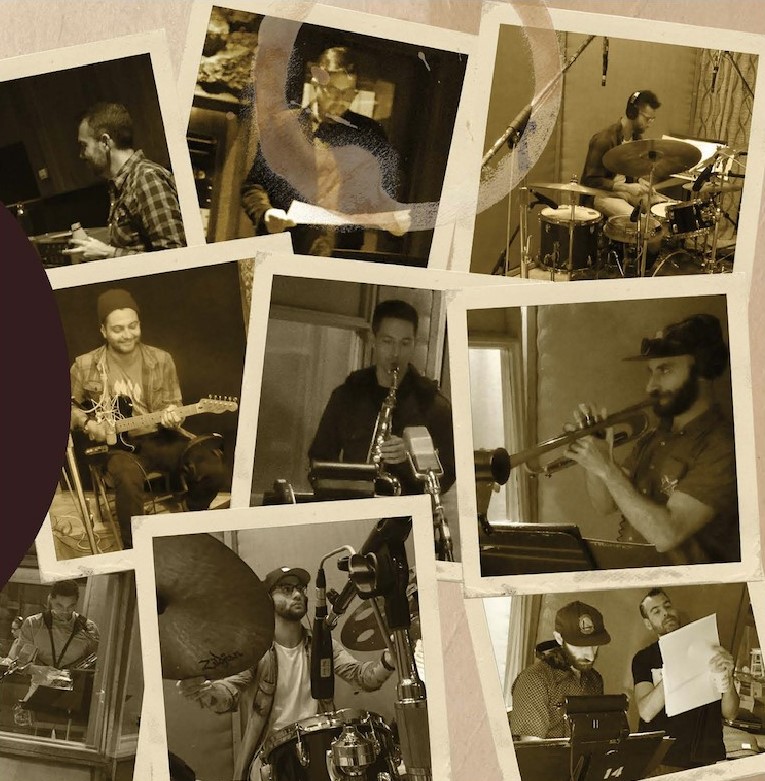 In the midst of his rock and pop career (which continues today), Lion decided in 2006 to expand his instrumental arsenal to include double bass under the guidance of veteran bass expert Glenn Richman. With encouragement from pianist Susan Muscarella, the founder of the California Jazz Conservatory, Lion plunged into jazz studies and graduated from the CJC. Steeped in the expansive history of jazz and creative music, he continues to look for new ways to build on the music scene, such as his long-form interview series and podcast On the Scene SF/O. Presented by Ridgeway Radio (part of Denson's 501c3 Ridgeway Arts organization), the series features discussions with established artists such as jazz saxophonist Dayna Stephens, drummer Michael Shrieve (Santana), trumpeter Cuong Vu (Pat Metheny), and many others. More information can be found at www.otssfo.com, and on Apple iTunes.

Lion has found an ideal creative partner in Dineen, and a subject ripe for musical exploration in Jeff Buckley. In many ways, Eternal Life is an arrestingly vivid snap shot of a tableau that continues to evolve. As the ensemble continues to distill and expand the arrangements "we have to reevaluate notions of how we perform and play every note, even how we set up in a performance," Dineen says. "We're still learning how  our different voices can build together. Performance is really exciting right now."

With Eternal Life as the starting point, music fans of every stripe can experience Jeff Buckley's music with new ears. It's a sonic sojourn unlike anything else in jazz and beyond. 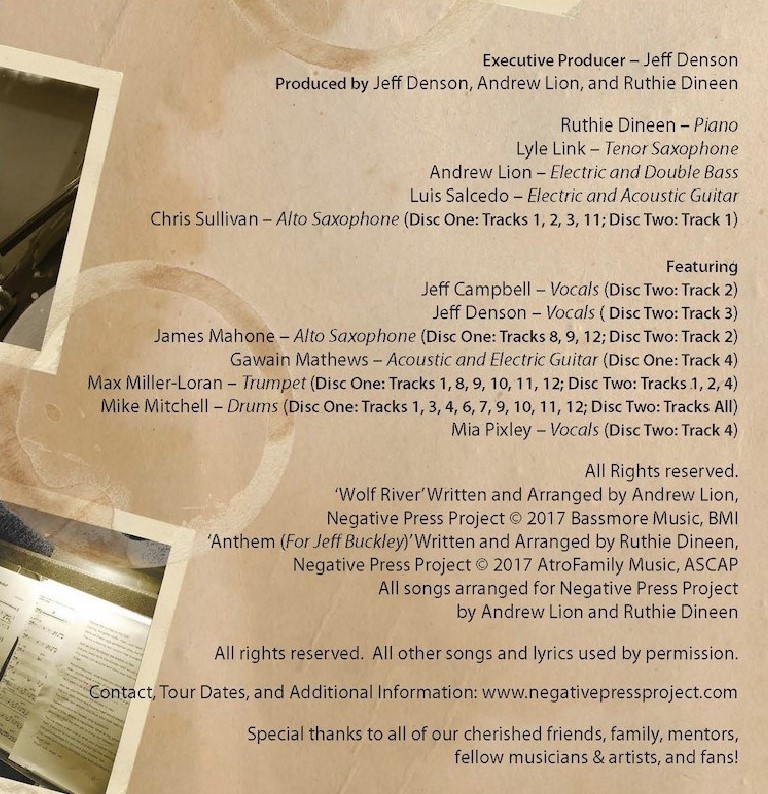 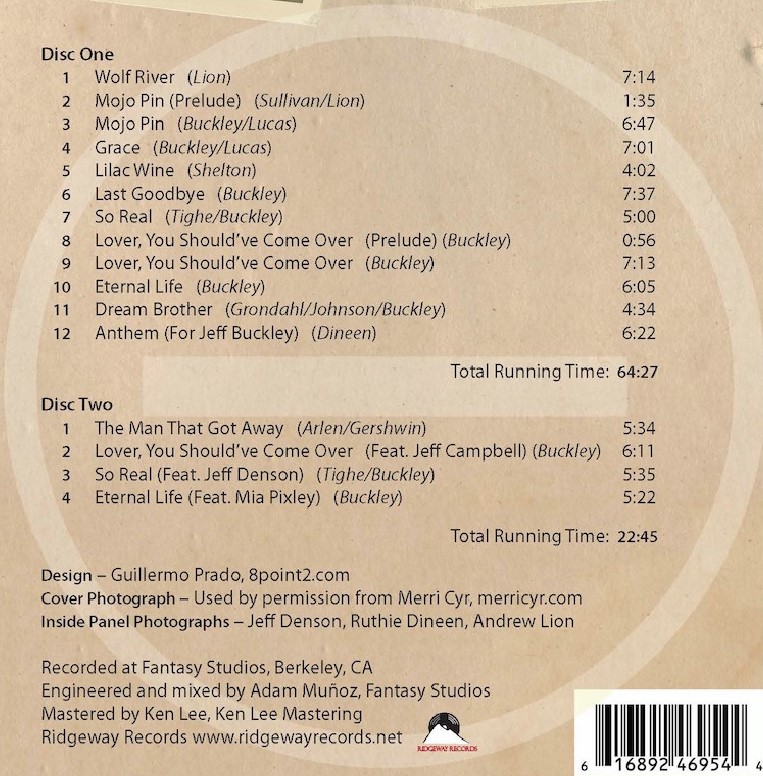 Know That This Weekend's $5 Album is... Mike Osborne's Dawn!! 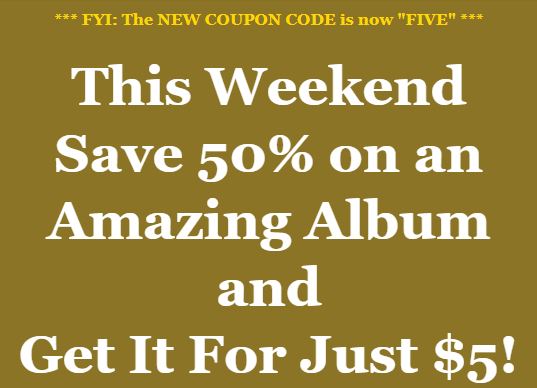 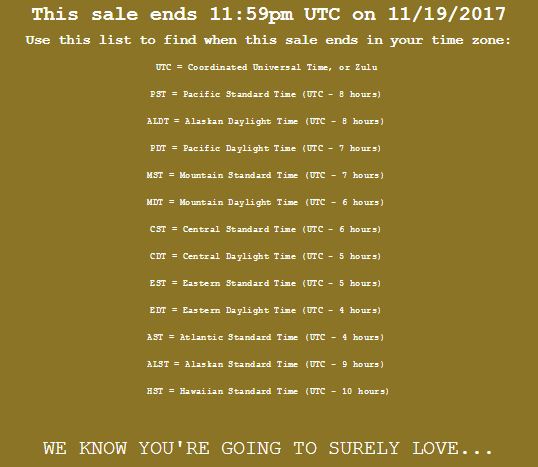 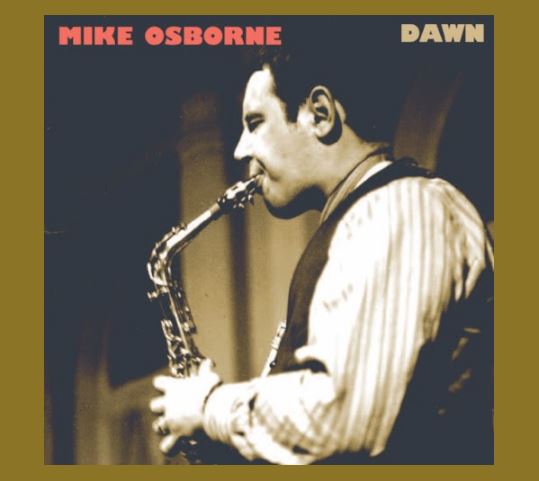 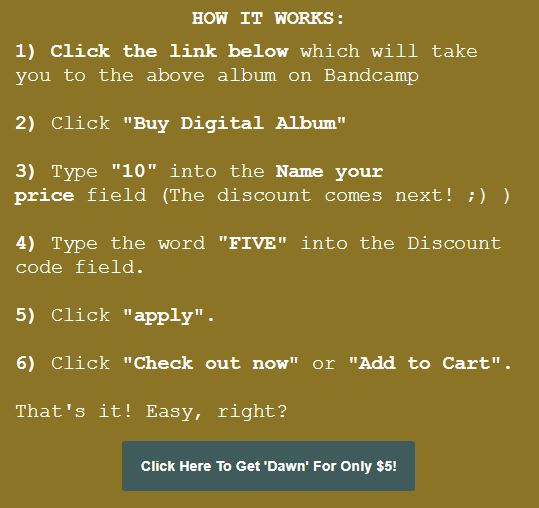 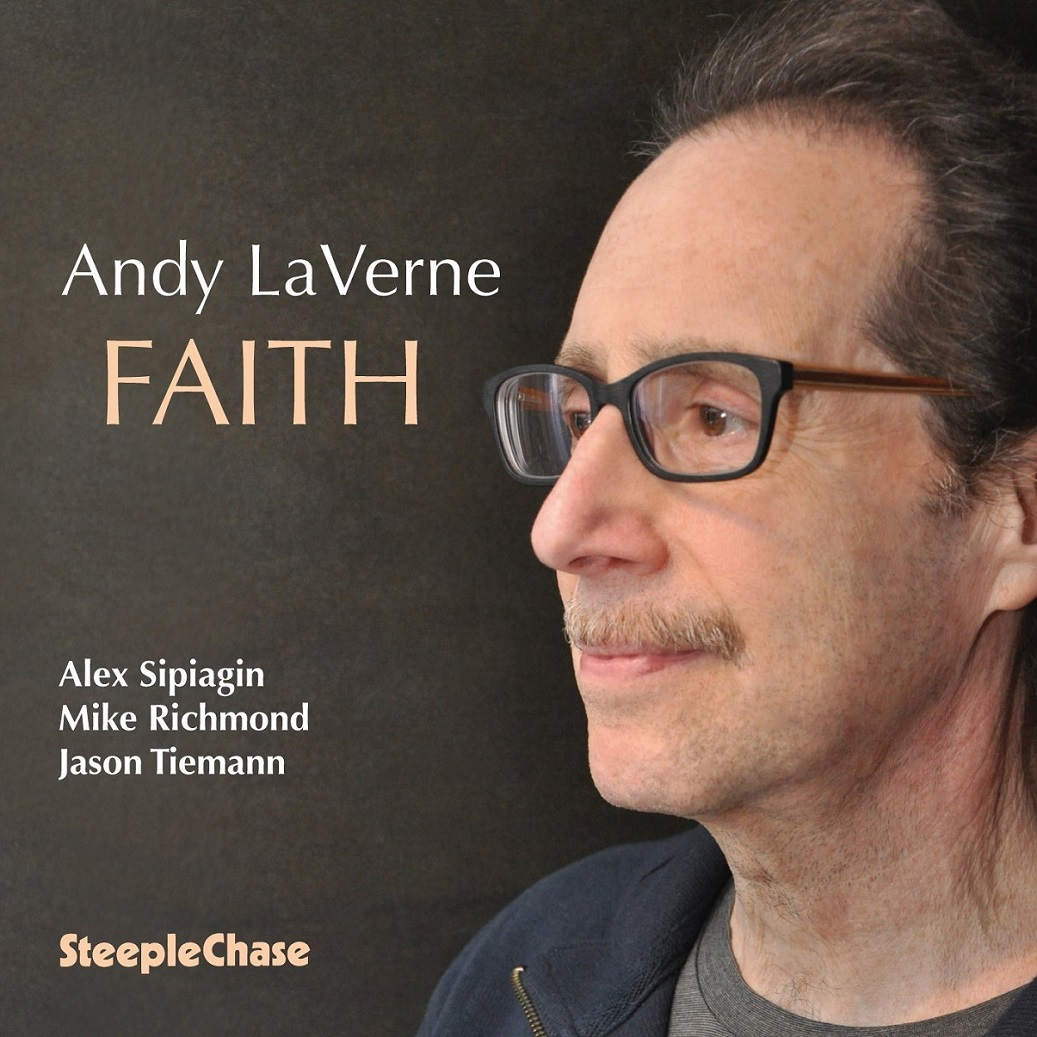 Andy LaVerne continues to explore the path he set out with his previous critically acclaimed release “Genesis” (SCCD 31818), this time with an added voice in trumpet/flugelhorn by Alex Sipiagin as well as Mike Richmond’s overdubbed cello over his bass-line.

As in the previous album all titles are new originals by LaVerne, who, to quote Neil Tesser, Grammy Award winning American journalist, is a committed melodist, with truly individualistic tone.

“… Intelligent Design lives up to its name as one of LaVerne’s best efforts thus far and one of the finest jazz releases of the year.” (C. Andrew Hovan – AAJ)