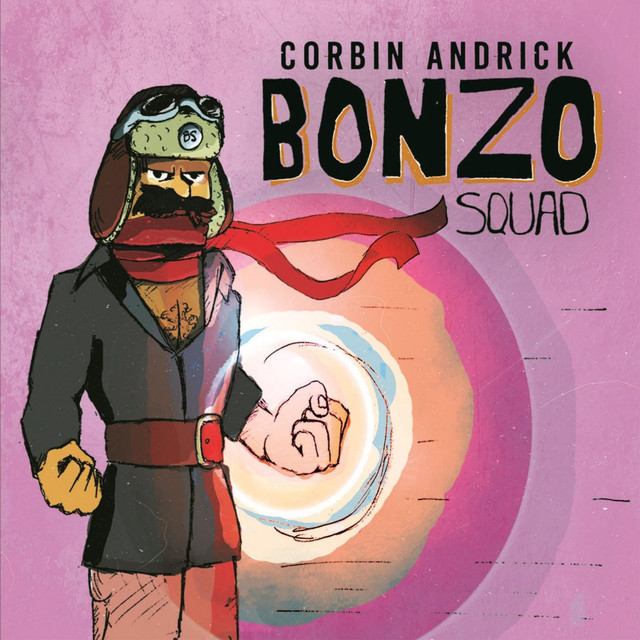 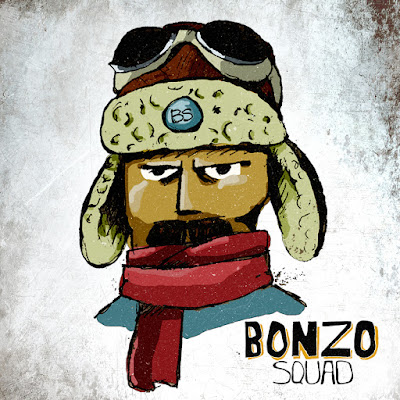 Bonzo Squad is an instrumental ensemble formed in Chicago, IL.  The group formed as the house band of a jam session at Lilly's in 2014.  Member of Bonzo Squad include Corbin Andrick (Bonzo) on saxophones and flute, Andrew Lawrence on keyboards and synthesizers, Andrew Vogt on bass, and Zack Marks on drums.  For all intents and purposes, lets call them Corbin, Lawrence, Vogt, and Marks.

The story starts when Corbin met Marks while playing in Bumpus, a funk/soul band in Chicago.  The two travelled all over the country with this group and collaborated on several songs for Corbin's first two releases.  Corbin then found Vogt on a golf course at LaGrange Country Club and ended up asking him to do the house set at Lilly's, where he stayed until the present.  Finally, Lawrence came into the picture when Corbin and Zack went to Multi-Kulti.  Lawrence was running the Tuesday night Multi-Kulti jam session at the time when he and Corbin collided again.

Corbin needed a sub for Lilly's and Lawrence gladly accepted.  These four recorded 22 tracks in two days at IV Labs studios, performed an all David Bowie Tribute, an all Prince Tribute, a Mozart tribute, and a full blown Christmas production.

They are set to release their debut album "Bonzo Squad" in 2017. 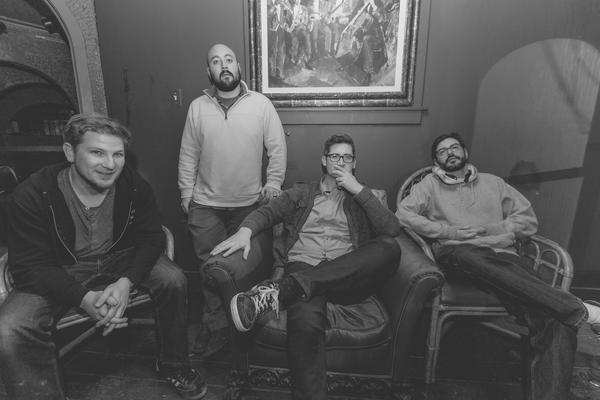 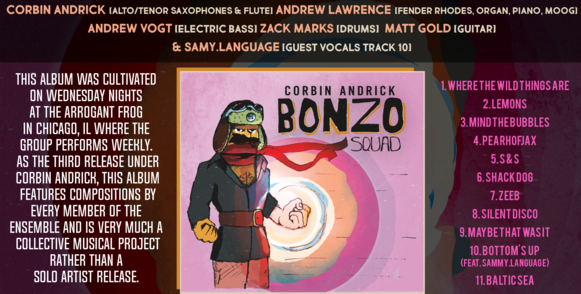 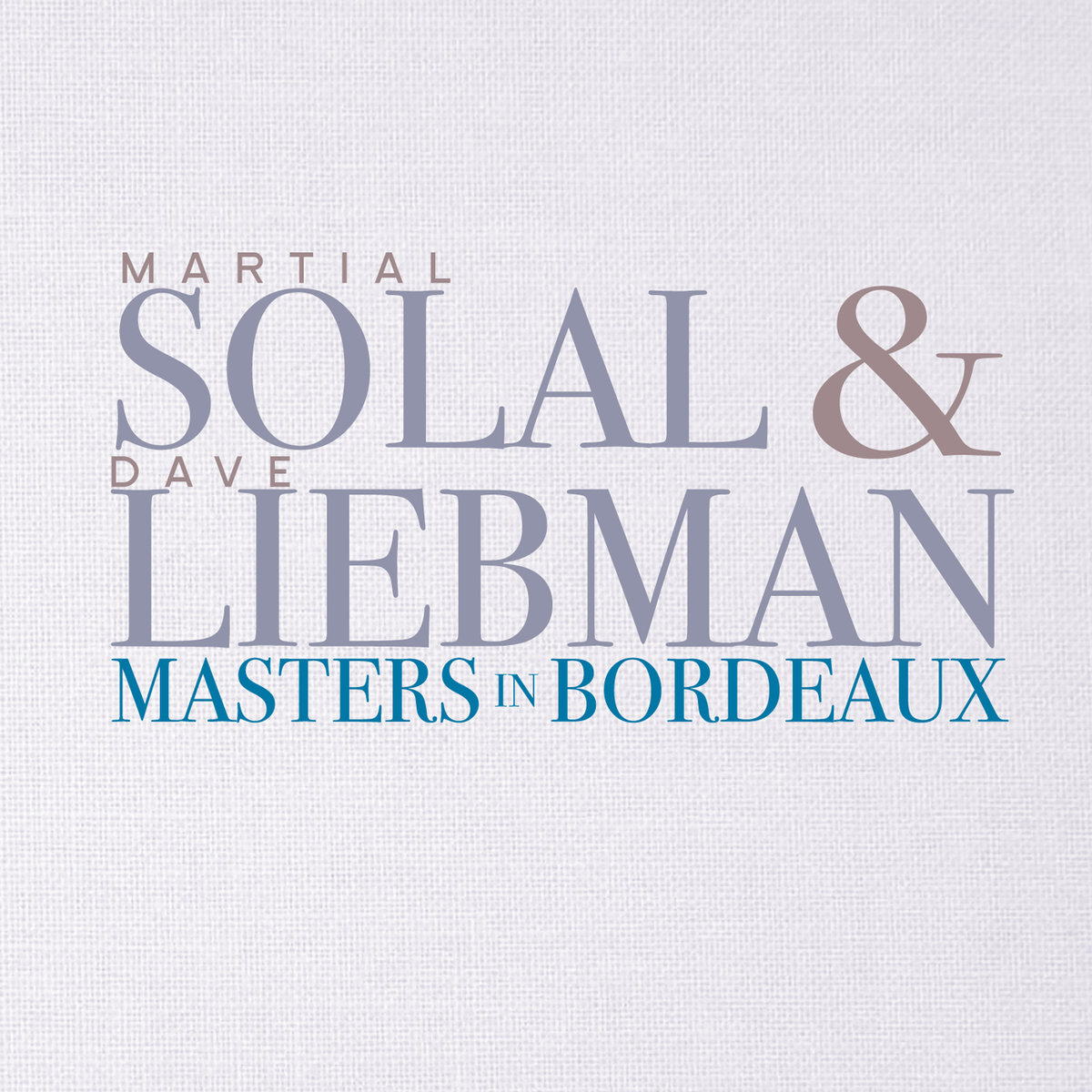 The meeting of two musical giants is a pretty common thing these days. Far more uncommon is the first collaboration of two musicians from different generations and continents. That is precisely what is so unique and wonderful about the recent partnership of French piano legend Martial Solal and American saxophone giant Dave Liebman and their new recording, Masters In Bordeaux.

Born in Algiers and based in Paris since 1950, Solal is arguably the most important name in jazz from Europe. The 90-year-old pianist has been at the cutting edge of jazz music since the 1950s, as one of the first Europeans to master the bop language, scoring Jean-Luc Godard’s Breathless, leading an extraordinary big band, and collaborating with important voices in the music from around the globe. 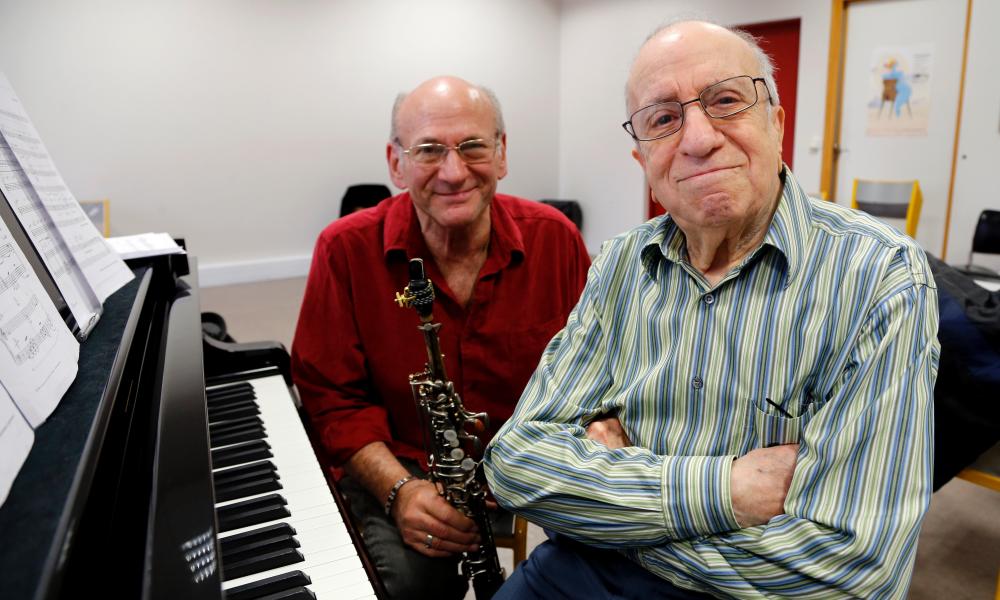 Twenty years Solal’s junior, NEA Jazz Master Liebman has been a force in the spread of the music. His mastery of the saxophone and his musical eclecticism have made him a role model to many younger players. Liebman’s extensive résumé covers sideman roles with many of the masters, including Elvin Jones and Miles Davis, as well as leading his own revolutionary ensembles.

Though a fan of Solal’s work, Liebman had never met or played with him before 2016. It was the saxophonist’s former student Jean-Charles Richard who was able to bring the two together. Being Solal’s son-in-law, Richard was able to propose a meeting. Liebman provided some music of his longtime collaboration with the great pianist Richie Beirach. It wasn’t long before Solal reached out in hopes of playing with Liebman.

Their first performances were at the Sunside Jazz Club in Paris. Liebman was struck by Solal’s complete control and harmonic adventurousness. The two performed standards and a couple of originals in two successful evenings. The exhilaration of performing together, the challenge of their demanding musical knowledge, and their instant rapport made further meetings a priority.

The duo’s next opportunity came when Jean-Jacques Quesada invited them to perform a concert at Château Guiraud in Sauternes, France as part of the Jazz and Wine Festival in Bordeaux. 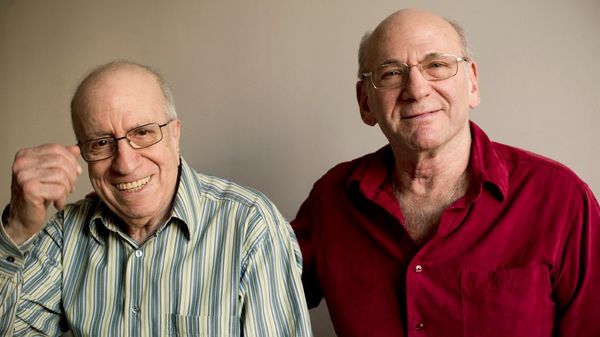 The material was selected on the spot. The two decided to play standards that they knew well but that would prove to be intriguing because of the duo’s flair for harmonic experimentation.

The program begins with a fascinatingly deconstructed version of Kern and Hammerstein’s “All The Things You Are,” the two musicians seemingly finishing each other’s musical statements. Cole Porter’s “Night and Day” is introduced by Solal’s introspective plucking before Liebman’s resonant tenor begins to sing alongside, both bringing real sparks with their playing. Spritely soprano introduces Miles Davis’s “Solar” while Solal’s piano plays brilliant and allusive lines setting off some amazing interplay.

Porter’s “What Is This Thing Called Love” begins with a fantastic, pointillist tenor cadenza commences with an exhilarating duo passage, followed by a poignant Solal solo. The duo’s take on Kaper and Washington’s “On Green Dolphin Street” is measured yet still seeking. The Davis, Ramirez, and Sherman chestnut “Lover Man” concludes the set with perfectly weighted drama and intent.

In a true show of musical generosity and spirit, Martial Solal and Dave Liebman have begun a marvelous new partnership. Their new recording Masters In Bordeaux displays the duo’s quickly developing empathy and brilliance in performance. 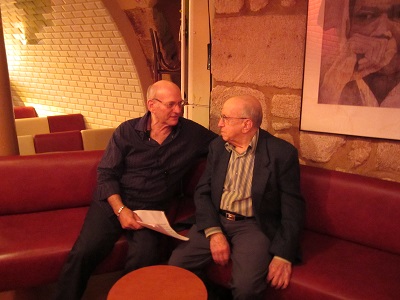 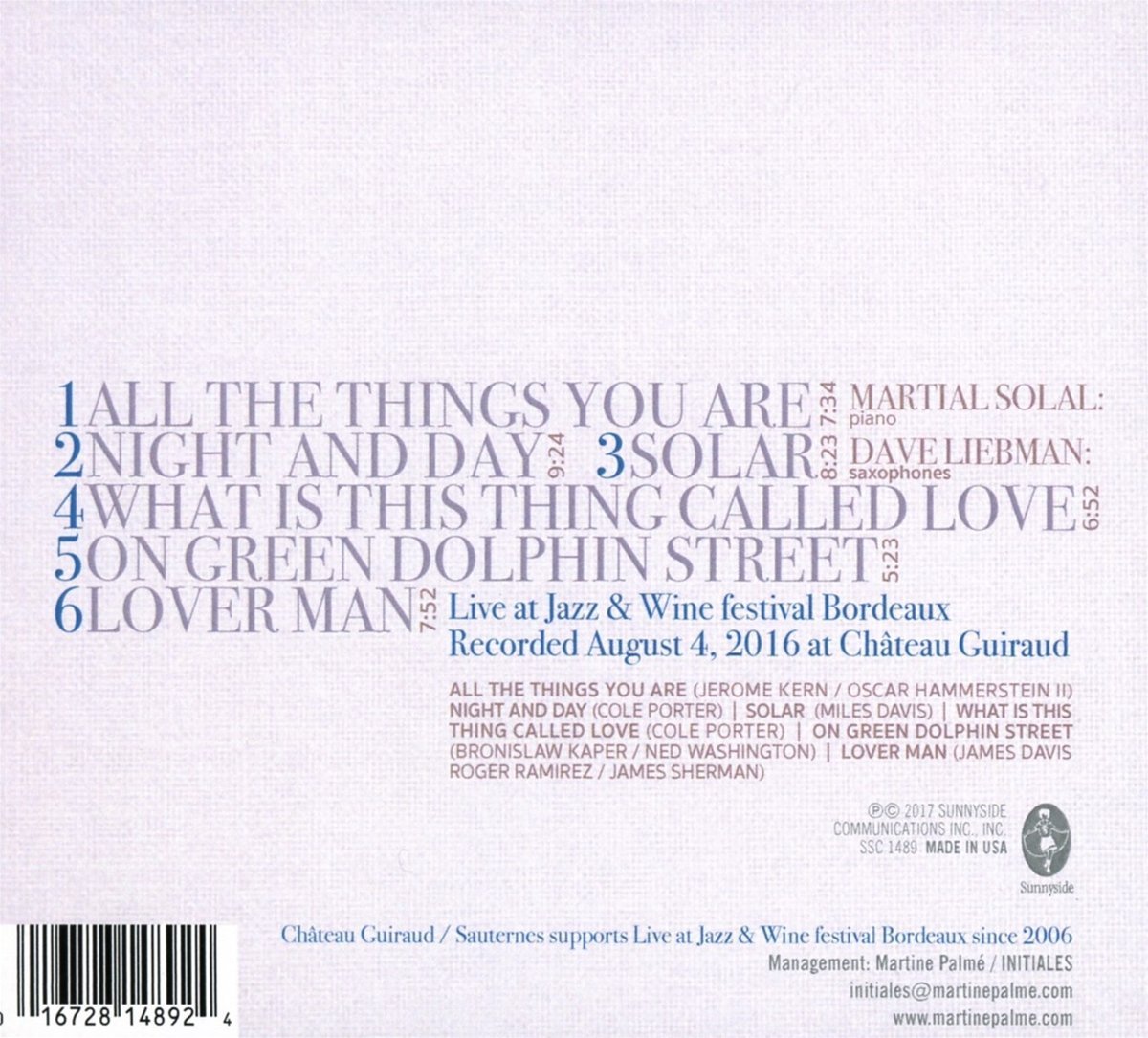 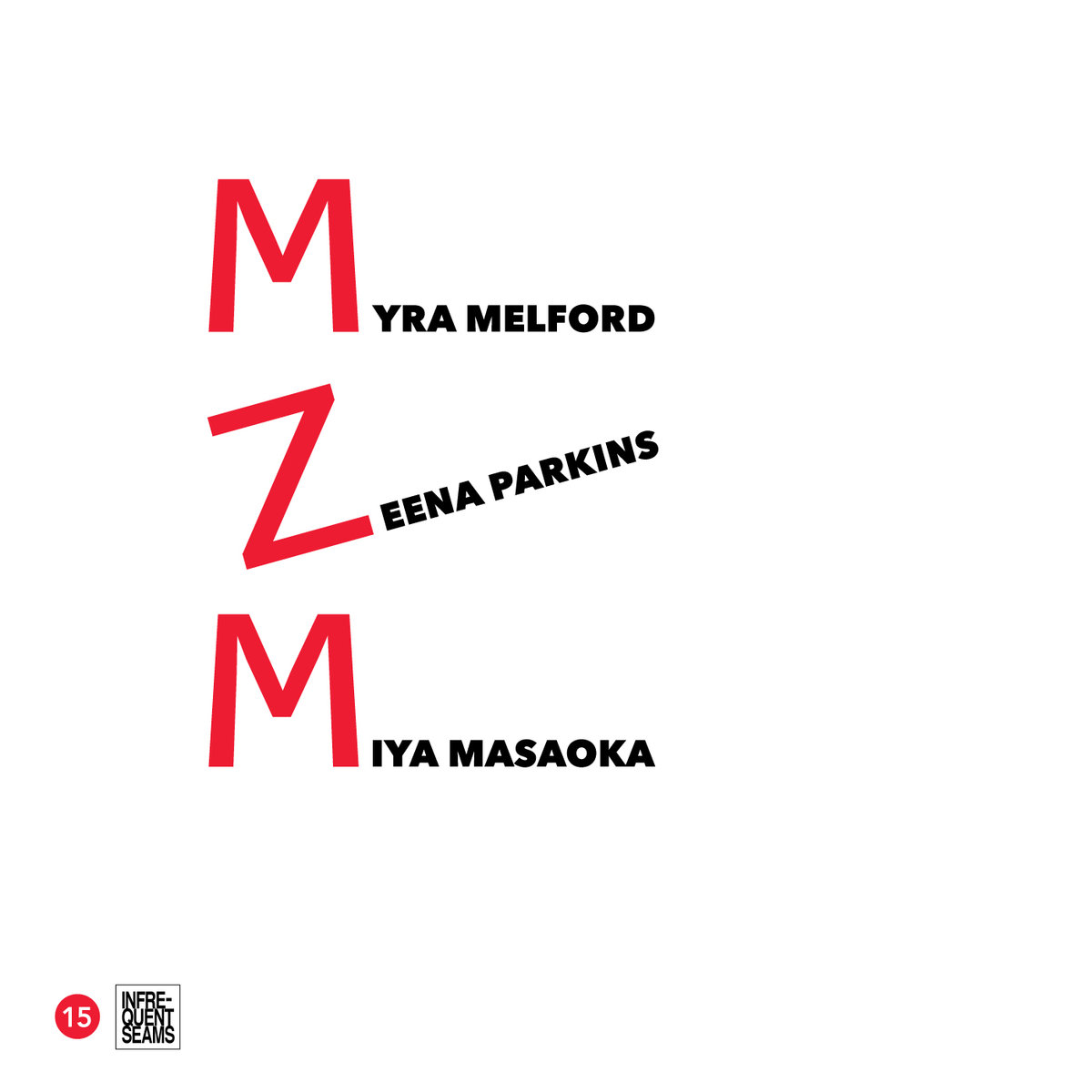 Ten improvised pieces from three of the most innovative instrumentalists at work today, blending harp, piano, and koto with electronic sounds. The new trio of Myra Melford, Zeena Parkins, and Miya Masaoka is called MZM. Each made an indelible mark in the last three or four decades of experimental music, and their improvisations blend together all of the various histories that evolved from their disparate activities. From sound-art to noise rock to modern jazz, are each known both for their extensive output as leaders and their their work with a who's who of adventurous music: Bjork, Nels Cline, Steve Coleman, Dave Douglas, Mark Dresser, Fred Frith, Joseph Jarman, George Lewis, Pauline Oliveros, Yoko Ono, Tin Hat, Christian Wolff, and many others.

In memory of David Wessel, our dear friend and colleague who will never be forgotten. 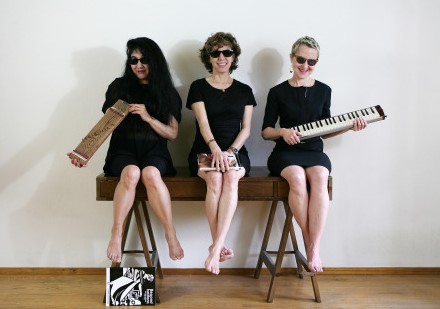 In improvised music we encounter a space of freedom, which is specific to this music. It speaks to us, wants to be exhausted, forded and explored. The potential of this freedom at hand seems to be borderless and signifying for this form of music. "We search for sounds. We look for the meanings that become attached to sounds. And we have to decide – on the basis of observable responses – on the musical, cultural and social values that reside in whatever configurations emerge. The search is surely for self-invention and social-invention. This is an opportunity to make our world" (Edwin Prévost). It seems to be natural in improvised music, that we are addressed as beings that do not only learn sounds, explore and constellate them, but also define their self- and world- relations. In the conversation of this music, we are not merely preservers of a tradition and members of a self-iterating community, or actors in a fixed play of society, limited to one specific form of life. Rather, as one could say with Hegel, the musician could be seen as an agent of a self-accomplishing skepsis.

But skepsis and change are inscribed into our post-Nietzschean society in a prominent way, which is why we have to ask what else is signifying for improvised music. It seems to be neither the search for new sounds (on its own), which is also a standard modus-operandi of many other forms of music, nor the constitution of a value system and a world picture, which is always the case. If we ask, "who is searching for the sounds, where and how are they shared, how is the search being conducted," it seems that we see a clearer picture. For improvised music it is signifying, that these unique agents, the searching and sounding individuals, are presenting their sounds (and therefore themselves) to a society of the like-minded, after they have asked / while they are asking their instruments about sonic potentials. It is a society of poets who speak with an "idiosyncratic vocabulary" (Richard Rorty), which meets on the basis of their own languages, in a forum of egalitarian discussion. This discussion shows a specific form of openness and acceptance for the contingency of the individual proposals and has an increased degree of acceptance for skepsis. In relation to society, improvised music has to be understood as a utopian project that hints to a horizontally organized, non-hierarchical discourse. It is the courage / the need for skepsis and the discursive play of the individual actors, that distinguishes improvised music. Improvised music is the realm of a hyperbolic constructive skepsis, which, in the words of Immanuel Kant, is asking: "sapere aude.”

If, in the light of this theoretical lens, we take a look at the music of Miya Masaoka, Zeena Parkins and Myra Melford, the courage of their discussion is striking. All three artists have done groundbreaking work in their field and have been important voices in the development of creative music in the last few decades. Every one of them has, as both performer and composer, developed a unique body of work, which contains their individual sonic utopias. Miya Masaoka has found international recognition as a Koto-player, composer, performance-and sound artist. Zeena Parkins is an internationally known multi-instrumentalist, harp-player, composer and improviser. Myra Melford has been internationally successful as a piano player and composer as well. All three have received diverse awards and prizes for their work and have been/are serving as teachers at different highly recognized universities.

It is in the autonomy of the individual projects and the idiosyncrasy of the languages, where they musically debate with each other. In the unfolding discussion, the willingness for parallelism and the heterogeneity of material and ideas, which rest upon a deep mutual understanding and trust, play an important role. The music becomes a forum of exchange between strong individual voices and natural forces, which is resting upon the mutual challenge that the participants are posing to each other. They are addressing the question “Why do we improvise?” in a highly adventurous way. Following a concept of German philosopher Hans-Georg Gadamer, we can understand the musical exchange as a transformative conversation, which is resting upon a constructive reception of the productive skepsis, inherent to improvised music, and is opening the view for a form of life: 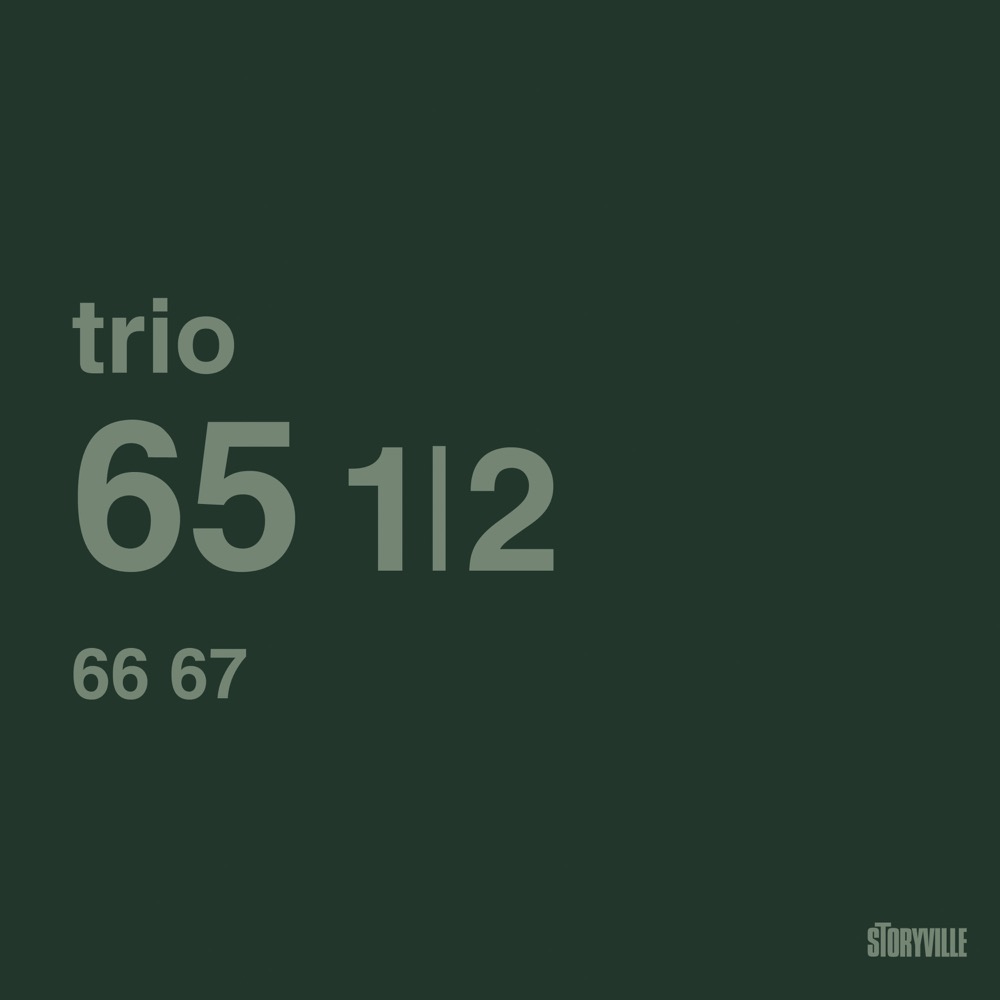 Trio 65 ½ was the trio that won all the jazz-competitions in the mid 60’s and were “talk of the town”. The three incredibly talented musicians listened to their idol, the pianist Bill Evans’ LP Trio 64 and halfway through 1965 Ole Streenberg came up with the name: Trio 65 ½. Ib Lund Nielsen wrote notable songs such as Bit og Juleballade, which still is remembered by the attending guests at one of the first “Jazz I Reprisen”-events in Holte in 1967.

They are all to be found on this new release and as Kenneth Knudsen says: “It hits me, how tight it was. Jens Jorn Gjeldsted Ole Streenberg and I were young, around 20 years old. And unexperienced. Ib Lund Nielsen was a bit older and with some experience from other groups. When we, quite randomly, met each other, it did not take long for us to realize that we shared a mutual pulse, a comfort – a faith, that the music stood by itself. It was new and weirdly wordless. We didn’t even know how special it was, because we were completely focused on creative development. And the problems and challenges that come with it.

I myself was equally drawn towards fixing and tearing apart. But looking back, with so much experienced, so much played and heard, it’s clear to me, that this collaboration was the ‘approach to the music´. This feeling of approach that I think everyone experiences at some point – I hope." 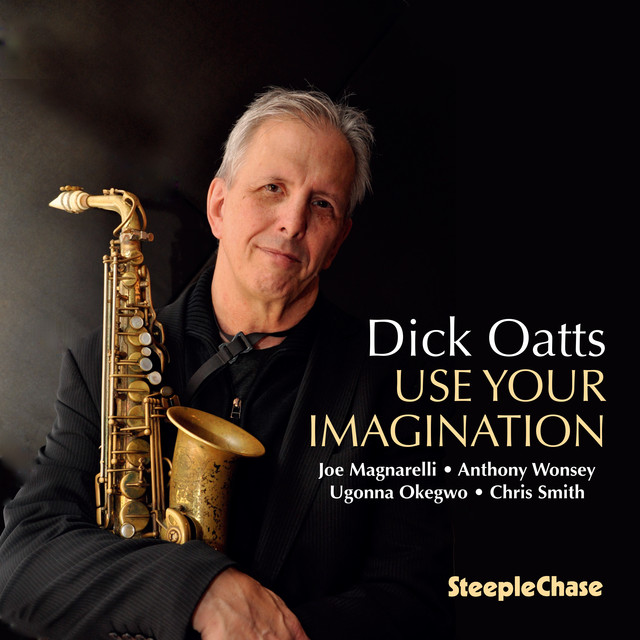